Mostly sunny skies and afternoon rain in the forecast 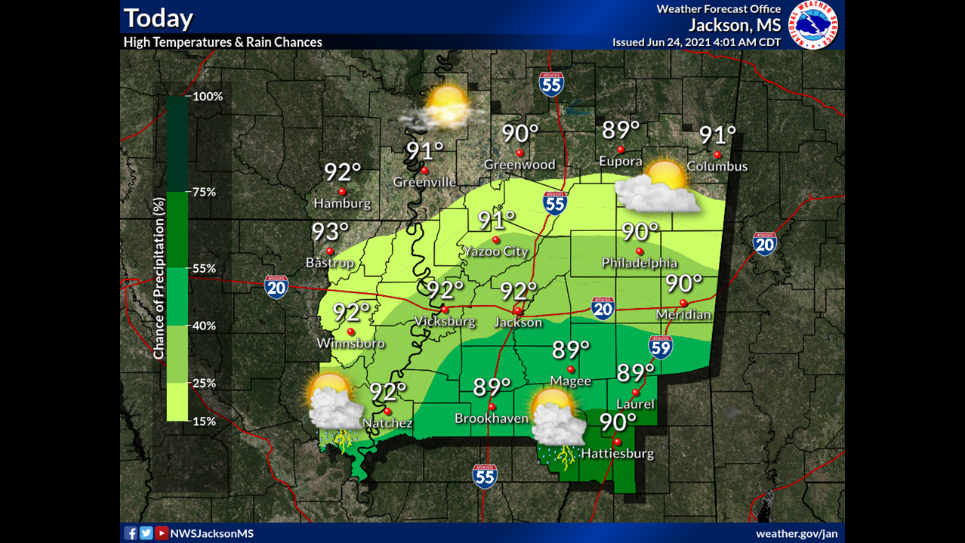 Mostly sunny skies and afternoon rains will be over the area today through the weekend, according to the National Weather Service in Jackson.

Showers and thunderstorms are possible in the afternoons — a 50% chance today after 2 p.m., dropping to 30% until about 8 p.m. Friday will see a 40% chance of showers and storms after 1 p.m. Saturday and Sunday will follow a similar pattern, with 30-50% chance of rain each afternoon.

Calm winds of no more than 5 mph are expected each day.

Two tropical weather systems are being watched by the National Hurricane Center, with little concern.

A disorganized area of shower and thunderstorm activity was more than 100 miles east-southeast of Barbados Thursday morning, moving west-northwestward about 10 mph with a 10% chance of forming into something organized in the next five days.

A strong tropical wave also emerged off the western coast of Africa Thursday morning. Although ocean temps are still relatively cool over the tropical Atlantic and are only marginally conducive for development, a small tropical depression could form by early next week while the system moves west-northwestward about 15 mph. There is a 20% formation chance in the next 48 hours, and a 40% chance over the next five days.