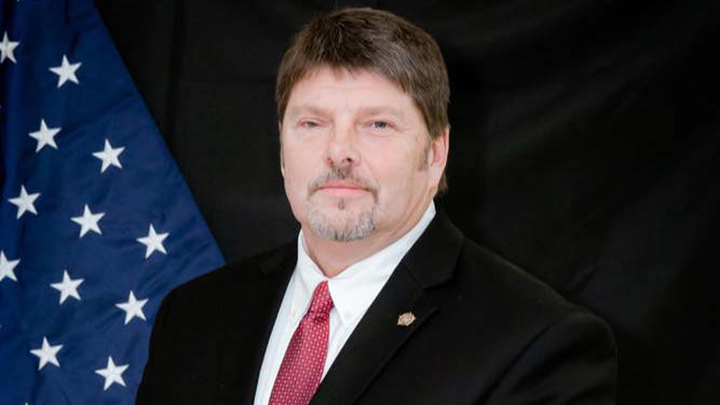 Submitted photo / Fundraising efforts are under way for Lincoln County Sheriff's Deputy Barry Huff, who is in need of a double lung transplant after illness. Support Huff at www.gofundme.com/f/barry-huffs-double-lung-transplant.

Barry Huff was my next-door neighbor when I was a pre-teen, teen, and young adult. We lived in the Roselawn subdivision in Natchez on Miller Avenue.

He is my brother from another mother. He was my best friend for all of my youth and was my best man at my wedding when I was 25.

Barry grew up with some adversity. When Barry was a small child, he lost an eye in a school playground incident with another child.

He never let that slow him down.

He has a glass eye. Most people cannot even tell he only has one eye. We used to play front yard tackle football. I’d hit Barry so hard I’d occasionally knock his eye out.

Barry would pick it up, run inside to rinse it off, and he would be back out playing football 5 minutes later.

We were also in the Boy Scouts together.

Barry is a really good guy. He isn’t a complainer or troublemaker like I can be at times. He just consistently gets it done.

This past week Barry and his wife Dosky traveled back to the University of Alabama Birmingham hospital in Birmingham from their home just west of Brookhaven.

This is about a five-hour drive each way. They were only going for a couple of hours of pre-lung transplant tests.

To save the $90 on the cost of a hotel room and the additional $15 for overnight parking at their downtown hotel, Barry and Dosky opted to do everything on the same day.

That meant waking up at 4 a.m. and driving five hours, doing two to three hours of medical tests and visits with the UAB doctors, then drive back five hours to their home in Loyd Star.

This would be a very long and extremely tiring day for most people.

Barry is doing it on supplemental oxygen and has only 30 percent lung capacity.

I do a fair amount of local Miss-Lou charity. Because of this I usually stay close to cash poor.

Despite this, I donated all of the cash that I could toward Barry Huff’s future travel costs and his additional (uncovered) medical and “cost of living” expenses.

I also wanted to help in other ways. I knew some of his extended family members had created a Go Fund Me page for Barry. I’ve been trying to attract public attention to it.

Here is that Go Fund Me link for Barry Huff: www.gofundme.com/f/barry-huffs-double-lung-transplant.

I’ve also donated an excellent desktop computer to be used in a future fundraising raffle. This complete computer is valued at more than $800.

Raffles, bake sales and additional fundraisers are on the horizon.

These are mostly in the planning stages. As more information concerning them becomes available it will be shared.

Barry Huff is currently working as an investigator for the Lincoln County Sheriff’s Office. He is a great guy who is a dedicated father to his kids, husband to his wife and public servant through his service in law enforcement and through his church.

Barry Huff deserves our admiration and our support. I hope anyone reading this will help him.

A BBQ lunch fundraiser has been scheduled for Huff on Thursday, Sept. 23, 11 a.m. until 2 p.m. at Westbrook Cinema 4 in Brookhaven.