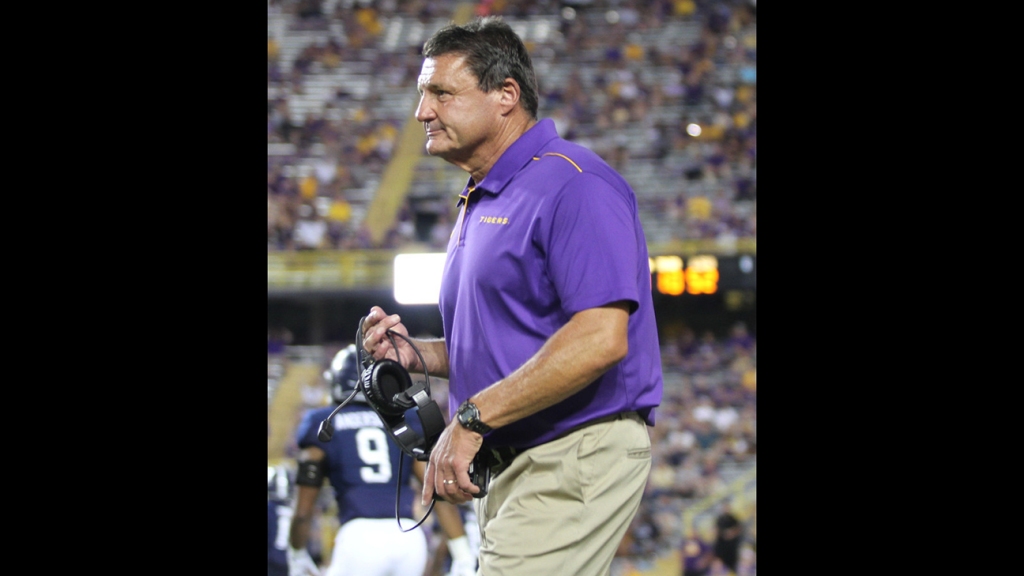 (AP) —For Ed Orgeron, LSU’s Cajun coach, a dream job is coming to an end.

LSU and Orgeron have agreed to part ways after this season, 21 months after he coached the Tigers to a national championship with what is considered one of the greatest teams in college football history.

“I’m always gong to appreciate my time here my time here. I have no regrets,” Orgeron said while sitting next to athletic director Scott Woodward, who made the announcement at LSU’s Baton Rouge campus Sunday night.

“We haven’t won enough games the last two years,” Orgeron continued. “I totally get it.”

Woodward spoke fondly of Orgeron even as he outlined what compelled him to make a change.

“Ed Orgeron’s a friend. We’re both Louisiana guys through and through. We both deeply care about this football program. And I will always be grateful for coach Orgeron for leading the Tigers to the greatest season in the history of college football,” Woodward began. “With that said, the job requires us to set personal feelings aside.

“We expect to compete for SEC and national championships year in and year out,” Woodward added. “Our last two seasons have simply not met that standard.”

Orgeron, who signed six-year extension after the 2019 season, will receive a buyout of $16.9 million in a variety of installments made through 2025, according to copies of a new employment agreement for the rest this season and termination agreement, both provided by LSU.

Sports Illustrated was first to report that Orgeron would not return to LSU in 2022.

While the timing of the announcement — the day after the Tigers (4-3) upset Florida — came as a surprise, the end for Coach O at LSU seemed to be approaching after a blowout loss to Kentucky last week.

That’s when Orgeron said he recognized “we were heading down road wasn’t positive for LSU and there was going to be a change made. … I just knew it wasn’t LSU style football. It wasn’t pretty. I was embarrassed.”

The win over Florida at home Saturday made LSU 9-8 since beating Clemson in New Orleans for the national championship on Jan. 13, 2020.

But Orgeron emphasized that he will not only happily continue to coach the Tigers for the rest of this season, but also will continue to recruit players to LSU, adding that he even spoke with two prospective recruits on Sunday.

“I recruited them to come to LSU. Why would I tell them any different now,” Orgeron said. “I love LSU and I was telling them the right thing before (knowing) I’m not going to be here.”

“I’ve been telling the kids I’m going to finish,” Orgeron said. “We’re not going to blink. I’m gong to be right there with them.”

Orgeron is 49-17 with the Tigers in six seasons, including 15-0 in 2019 when Joe Burrow won a Heisman Trophy and LSU earned its third national championship in 17 seasons — coming with three different coaches.

Burrow, now with the Cincinnati Bengals, said LSU’s decision on Orgeron was “really disappointing because he was a man that gave me an opportunity when nobody else really was.”

“I wouldn’t be here without Coach O and I’m forever indebted to him as a person and as a player,” Burrow added.” I love the man. I love the coach. They haven’t been winning as many games as I know they would like, but we did just win a national championship two years ago.”

LSU slipped to 5-5 during the pandemic-altered 2020 season, but the expectation remained that the Tigers would be back among the top teams in the Southeastern Conference this year after Orgeron overhauled his coaching staff.

Instead, LSU suffered a high-profile loss at UCLA in September and the season slid from there.

Orgeron becomes the second SEC coach to be let go two years removed from a national title, joining Gene Chizik of Auburn. The Auburn Tigers won the BCS championship with Cam Newton in 2010 but went winless in SEC play in 2012 and Chizik was out.

Orgeron became LSU’s head coach after being named interim four games into the 2016 season following the midseason firing of Les Miles, who had also won a national title with the Tigers in the 2007 season.

LSU went 6-2 the rest of that season and Orgeron was given a long-term contract by then-athletic director Joe Alleva.

Woodward, previously the AD at Washington and Texas A&M, replaced Alleva at LSU in 2019.

LSU won nine games in 2017 and 10 in 2018 before everything came together in 2019, with Burrow and a slew of players who went on to become first-round NFL draft picks. That team was quickly stripped down of many of its key parts, with players entering the draft and key coaches leaving for other jobs.

Orgeron said he does not expect to be on a coaching staff next season, explaining that he wants to take stock of his life and spend more time with his three sons.

“I’m 60 years old and I’ve coached for 37 years,” Orgeron said. “I think I’m going to have enough money to buy me a hamburger – maybe a double-meat cheeseburger. But I want to take a little time off to find out what direction I want to be in.”