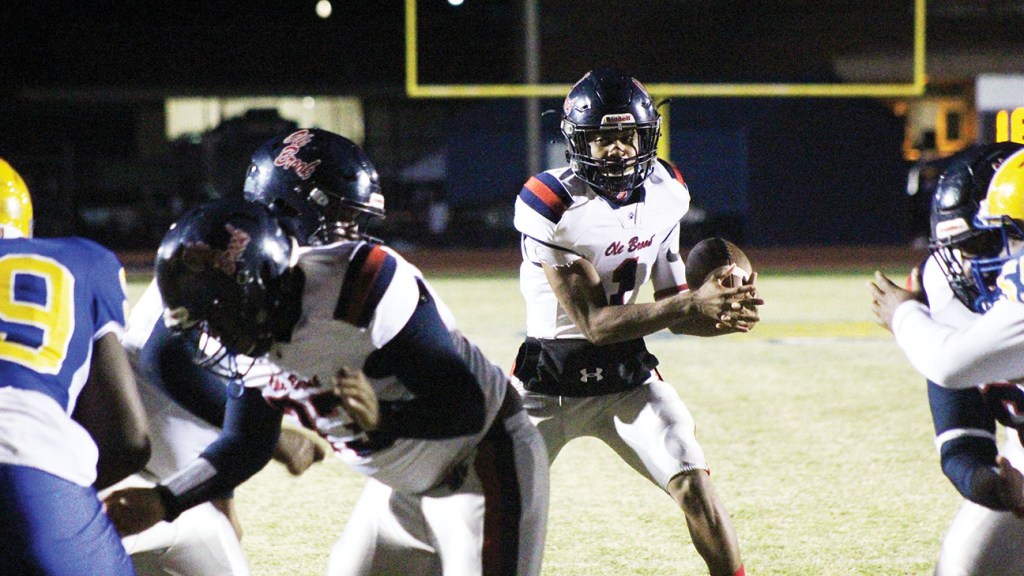 Photo by Hunter Cloud Dre Ross of Brookhaven High looks for a hole in the Natchez High line of scrimmage Friday night in a 49-20 win for the Panthers.

The Natchez High School Bulldogs scored their first touchdown of its homecoming game against Brookhaven High on a five-yard rush by Traylon Minor with four minutes left in the second quarter.

As the team jumped onto the track to celebrate, it seemed like momentum had swung in Natchez’s favor.

If so, it would quickly swing back to Ole Brook’s favor as BHS sophomore Xavier Gayten caught the ensuing kickoff and made his way down the right sideline to score on an 82-yard return.

“We had started moving the ball well and getting some rhythm,” Craft said. “We kicked it to no. 5 (Gayten) and he returns it for a score. It flipped the game.”

Brookhaven High went on to win 49-20 in the Region 3-5A matchup following an impressive performance by senior quarterback Dre Ross who had three touchdowns in the game.

Ole Brook head coach Tucker Peavey said Ross is stepping up when his team needs him.

“Here lately he has come back around to playing his best,” said Peavey. “He is a senior with a lot of experience and hopefully he is kind of peaking for us.”

Peavey said he expected his team to win the line of scrimmage and Brookhaven High did just that.

The Panthers put an immense amount of pressure on Bulldog quarterback Kyreek Murray.

Numerous times, Murray would take the snap and immediately be faced with several Panther defenders in his face. This led to Natchez struggling to connect with wide receivers like Joshua Thomas, Mike Williams and Demarcco Blanton.

“They have a big defensive line, and we didn’t protect as well,” Craft said. “Last week our center got hurt. Our chemistry on the offensive line was not there like it normally is.”

Natchez didn’t go away quietly following the kickoff return. Instead, with 1:29 left in the second quarter, Murray connected with Williams for a 9-yard touchdown pass. The score cut the Panthers lead to 28-14 before half.

Natchez gave up three touchdowns in the second half though, two of them scored by Gayten on the ground for BHS.

With 30 seconds left in the game, Kevontae Stewart scored on a three-yard rush for the final NHS touchdown of the night.

Natchez concludes the 2021 season next week by hosting Florence High. BHS is back on the road at South Jones in Ellisville. The Region 3-5A standings were shook up Friday when Hattiesburg High gave the West Jones Mustangs their first division loss of the season by a 20-17 final.

Now the Mustangs and Tigers are both 5-1 in region play with HHS having lost at Brookhaven High earlier in the season. Hattiesburg plays Laurel next Thursday in the Little Brown Jug rivalry game.

Laurel beat Wayne County 21-18 Friday in a result that helps Brookhaven in its quest to land the No. 2 seed in the region. BHS will first need to beat South Jones next week and then hope for Laurel to take out Hattiesburg on the road while also pulling for West Jones to beat Wayne County in the other important division matchup.

By Hunter Cloud, The Natchez Democrat