Veteran donates flag to Warriors of the Badge 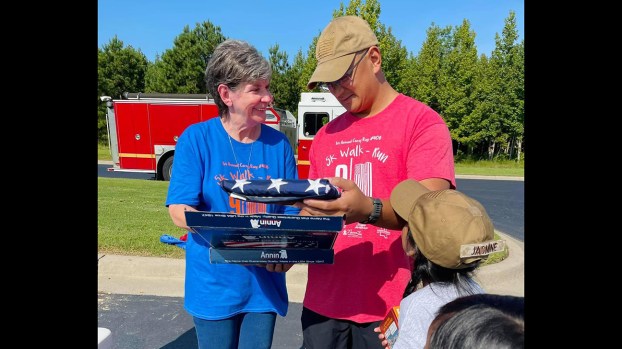 Photos submitted John Bestoca, a United States military veteran and contractor in Iraq, recently donated a flag to the Warriors of the Badge organization as a “small” token of gratefulness for its work and for the people behind it. The flag flew over the American consulate in Erbil, Iraq. Pictured are Warriors of the Badge founder Vicki Moak and Bestoca, along with his children. 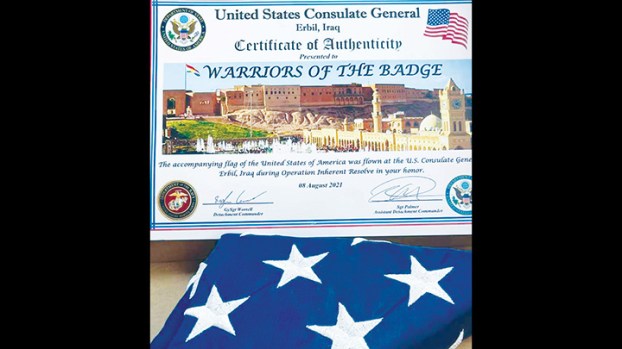 Photos submitted John Bestoca, a United States military veteran and contractor in Iraq, recently donated a flag to the Warriors of the Badge organization as a “small” token of gratefulness for its work and for the people behind it. The flag flew over the American consulate in Erbil, Iraq.

An American flag that waved previously above the consulate in Erbil, Iraq, has been fitted with a protective frame so it can continue to inspire others about the sacrifice of those who protect and serve the people of this country through the military, law enforcement and medical services.

John Bestoca, a United States military veteran and contractor in Iraq, currently based out of Magnolia, donated the flag to the Warriors of the Badge organization as a “small” token of gratefulness for its work and for the people behind it.

“I’ve heard of their financial and moral support in this community,” which touched him, Bestoca said. “I’d seen their support, especially Mrs. Vicky [Moak], and wanted to give it as a small token of appreciation for all they’ve done.”

Warriors of the Badge is a nonprofit organization operated exclusively for charitable purposes to provide aide and assistance to law enforcement, firefighters and EMS killed or critically injured in the line of duty, as well as their families.

Founder Vicky Moak, mother of fallen Brookhaven Police Department Cpl. Zach Moak, organized Warriors of the Badge to raise funds for the families of those killed or critically injured in the line of duty.

“They never know what they’re walking into, and sometimes they work hand-in-hand,” Moak said as to why more than just law enforcement officers are included in who the group helps. “We don’t stop and think [about] what all they do for us.”

The numbers for assault of officers is grim — and higher than last year. A report by the Federal Bureau of Investigation stated that as of Oct. 21, 61 law enforcement officers were “fatally wounded,” 24 to “unprovoked” attacks, as compared to 41 in 2019.

The assaults were reported to the agency by 9,895 law enforcement agencies.

Brookhaven has seen its share of officer loss, including that of Deputy Donald William Durr, a Lincoln County deputy sheriff shot to death in May 2017 by a man who ended up killing seven others.

President Donald Trump signed into law Dec. 21, 2020, naming a post office in Brookhaven after the three local law enforcement officers who were killed in the line of duty. A memorial highway in the area has also been named in their honor.

Durr’s killer was found guilty of capital murder and sentenced to death in February 2020. Moak and White’s killer pled guilty Nov. 3 and was sentenced to life for each death and 10 years for the weapons charge.

Bestoca is originally from the Philippines. He moved to the United States, where his mother had settled in Magnolia, and in 2007 he joined the Marine Corps, serving from 2008-2012. He worked for the Pike County Sheriff’s Office for seven years before becoming a U.S. contractor for the government.

He is married to Sherry and the family just moved to the Gulf Coast from Magnolia with their daughters, Jasmine, Olivia and Margo.

Moak filled in the story of how she and Bestoca met. “I had some leftover shirts from The Murph Challenge (see sidebar) and I brought them to the Pike County Courthouse and left them there for anyone who wanted one,” she explained. “John picked up one, then he researched and found out about our group [Warriors of the Badge]. He said he read about all the things we had been doing and he wanted to do something for us.”

Bestoca and Moak finally met face-to-face at the most recent 9/11 Walk and Run event in Madison, where he presented the flag to her.

“He hugged me and told me he was glad he got to meet me,” Moak said, tears in her eyes. “Honestly, I’m honored to have gotten to meet him.”

Bestoca recently returned to Iraq for work. Before he left, he said the reason he donated the flag to Warriors of the Badge focused on support and recognition. “I was just really impressed with them and wanted to do something that would show them that,” he said. “It’s not about me; it’s about them and who they support.”

Moak begs to differ. “I had never met him until the event in Madison,” she said. “I was in awe of him, too, and I want people to know what he did. All of Lincoln County has supported us and I’d like people to remember [his contribution as well].”

She plans to keep the flag with her and share it at events she attends. “I’ve debated what to do with it,” she said. “Maybe there is a place where it can be displayed and respected [for the message it sends and the camaraderie it nourished].”

Until then, she will keep it with her as a reminder of what was, and what can still be.