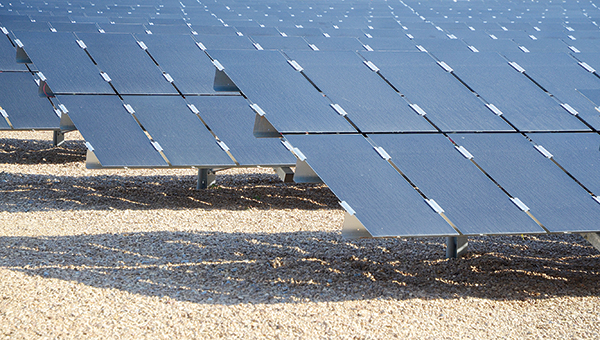 Photo by Luke Horton / Brookhaven is just one of three locations where Entergy Mississippi will be testing out solar panel technology.

In an effort to attract jobs and expand economic development, Entergy Mississippi announced Nov. 11 it was making “its largest-ever commitment to renewable resources” to meet energy demand and increase the state’s competitiveness.

“Basically, what we are doing is replacing older systems with solar, wind or some other source,” said Mara Hartman of Entergy Mississippi corporate communications. “Whatever renewable energy we end up going with will go on the grid and benefit of all our customers. It will be cheaper for customers and we can retire our older plants that use natural gas. It will be a buffer against rising gas prices.”

In 2019, Entergy installed in Brookhaven a fixed-tilt solar array that can produce 500 kilowatts of electricity. Entergy hoped it would help them answer some of the many questions about solar while giving customers access to a renewable energy source. It would seem the results were positive.

A company press release stated that Entergy Mississippi plans to replace aging natural gas plants with 1,000 megawatts of renewable energy, including solar, during the next five years. Called EDGE for “Economic Development with Green Energy,” the strategy is two-fold: give Mississippi an edge in recruiting industry while simultaneously giving Entergy customers an effective hedge against volatile natural gas prices, a press release stated.

“The EDGE plan will provide major benefits to the customers and communities we serve,” said Haley Fisackerly, Entergy Mississippi president and CEO. “Having significant renewable power is as important to large companies as a state’s tax and incentive structure, site availability and labor force.”

Fisackerly added that providing more renewable energy will put the state’s communities “in a better position for industrial recruitment” as well as diversify the company’s power generation portfolio “at a time of rising natural gas prices.”

Entergy relates that Mississippi may be losing the competition for new business because it can’t provide enough renewable energy.

Communities will also see the benefits of new construction jobs and new tax revenue as a result of these renewable power plants all being built locally.

Chairman Dane Maxwell of the Southern District applauded the plan, saying “I’d like to commend Entergy Mississippi for their effort in providing additional renewable energy options for consumers through their EDGE plan.”

Entergy Mississippi will begin issuing requests for proposals for multiple renewable projects in early 2022. The company would then take the finalized plans to the Mississippi Public Service Commission for review and potential approval later in the year, the report stated.

The company is already in the process of replacing some of the energy produced by recently-retired natural gas plants with renewable energy. The company’s partner, Recurrent Energy, broke ground in August on a 100-megawatt solar facility in Sunflower County that will power approximately 16,000 homes when it goes in service next year, the release said.