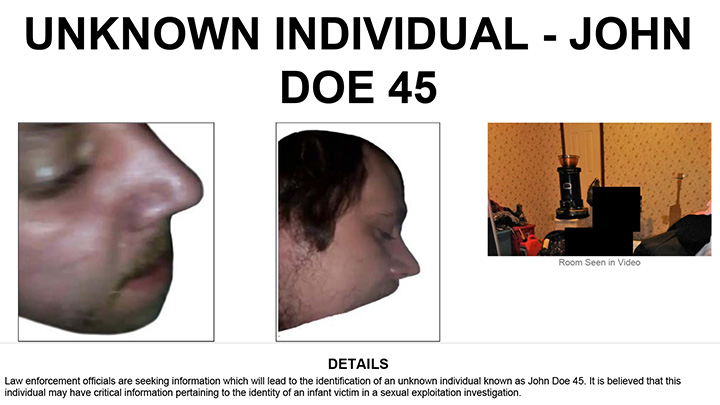 The Federal Bureau of Investigation is seeking the public’s assistance to obtain information regarding John Doe 45. The unidentified man may have critical information pertaining to the identity of a child victim in an ongoing sexual exploitation investigation.

Initial video of John Doe 45 shown with a child were first recorded by the National Center for Missing and Exploited Children in June 2020. The data embedded within the video files indicated they were produced between January 2019 and April 2019.

John Doe 45 is described as a white male with brown hair, brown mustache and brown beard. He is heard speaking English in the video. It is possible the individual’s appearance may have changed since the video was made.

The man is being sought as part of the FBI’s Operation Rescue Me and Endangered Child Alert Program incentives. Anyone with information to provide should submit a tip online at https://tips.fbi.gov/ or call 800-CALL-FBI.

No charges have been filed in this case and the pictured individual is presumed innocent unless and until proven guilty in a court of law.

As a collaborative effort between the FBI and NCMEC, ECAP seeks national and international exposure of unknown adults whose faces and/or distinguishing marks are visible in child pornography images. These faces and/or marks — such as scars, moles, tattoos — are displayed on the Endangered Child Alert Program Most Wanted webpage at FBI.gov/wanted/ECAP in hopes that someone is able to provide information that can identify them.

Since the inception of ECAP in 2004, 45 John Does or Jane Does have been investigated, 31 of whom have been successfully identified. These investigations have led to the identification of more than 51 child victims.

ORE represents a strategic partnership between NCMEC and the FBI’s Criminal Investigation Unit, Violent Crime Section and Child Exploitation Operational Unit. ORE image analysis methods concentrate on items seen in the backgrounds of child pornography images or videos. No clue is too small.

Additional techniques, such as isolating audio clips from videos to identify names spoken, even the dialect of language which is being spoken, have also led to rescues of abused children. Clues as small as a glimpse of a vehicle’s color in the reflection of one of its mirrors has been used to aid in the rescue of a child. Since its inception, ORE has led to the identification of more than 800 victims.