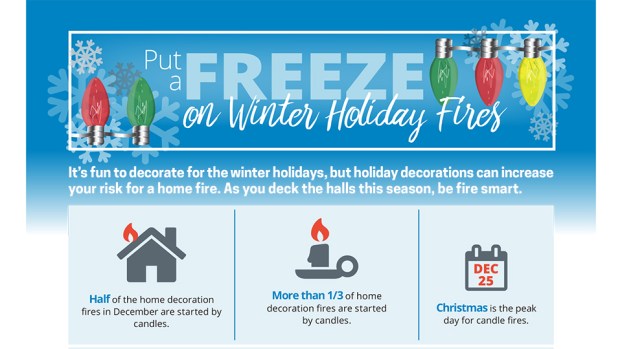 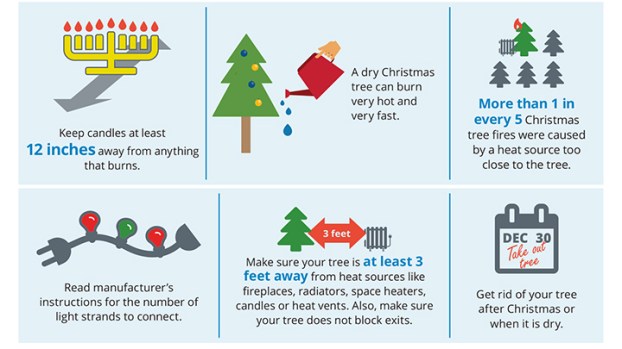 Fire safety is important all the time, but especially during the holidays, whether it’s concerning Christmas trees, fireplaces or New Years with firecrackers and other pyrotechnics.

Here are some sobering facts from the National Fire Protection Association:

In 2019, the three leading dates for home structure fires caused by cooking were Thanksgiving, Christmas day and Christmas eve.

Electrical distribution or lighting equipment was involved in almost half of home Christmas tree fires.

Brookhaven Fire Chief Jeff Ainsworth said having smoke detectors in your home can save lives, but they need help from you. Inspect your detectors yearly. Why not make New Year’s day your family’s day to change the detector batteries? Statistics show that choosing a day to do so, and then consistently doing it, might just save your life.

Families should practice drills to ensure everyone, right down to the smallest Who, will know where to go — and stay — until help arrives.

Don’t forget about taking care with heat sources during these nippy winter days. It’s wonderful to enjoy the warmth and beauty of a fireplace, but there are dangers lurking.

Use a fire screen to tackle logs and embers attempting an escape.

Fully extinguished embers before going to bed or leaving your house.

Fireworks start an average of 18,500 fires each year, including 1,300 structure fires, 300 vehicle fires and nearly 17,000 other fires, according to the National Safety Council, an entity that advises against using any fireworks at home. “They may be legal, but they are not safe,” its website stated.

“In 2017, eight people died and more than 12,000 were injured badly enough to require medical treatment after fireworks-related incidents. Of these, 50 percent of the injuries were to children and young adults under age 20. … And while the majority of … incidents were due to amateurs attempting to use professional-grade, homemade or other illegal fireworks or explosives, an estimated 1,200 injuries were from less powerful devices like small firecrackers and sparklers.”

According to the National Center for Injury Prevention and Control (NCIPC) fireworks can cause death and injury through burns, lacerations, and foreign objects in the eye. Moreover, almost 20,000 house fires are caused by fireworks each year, costing millions in property damage.

The following are suggestions the NSC offers to keep everyone safe:

• Older children should use them only under close adult supervision

• Never use fireworks while impaired by drugs or alcohol.

• Anyone using fireworks or standing nearby should wear protective eyewear.

• Only use them away from people, houses and flammable material

• Never point or throw fireworks at another person.

• Only light one device at a time and maintain a safe distance after lighting.

• Never ignite devices in a container.

• Do not try to re-light or handle malfunctioning fireworks.

• Soak both spent and unused fireworks in water for a few hours before discarding.

• Keep a bucket of water nearby to fully extinguish fireworks that don’t go off or in case of fire.

Sparklers are dangerous: They burn at about 2,000 degrees — hot enough to melt some metals. They can quickly ignite clothing and children have received severe burns from dropping sparklers on their feet.

According to the National Fire Protection Association, sparklers alone account for more than 25 percent of emergency room visits for fireworks injuries. For children under 5 years of age, sparklers accounted for nearly half of the total estimated injuries.

The Louisiana State Fire Marshal’s Office reported that more than 300 retail fireworks permits were issued for that state for the end-of-the-year season, as it is state law for wholesale and retail fireworks business operators to be appropriately licensed by the SFM in the parishes and municipalities where they are legally allowed. That’s good advice so that you take care you are purchasing the safest fireworks available so you and your loved ones don’t get hurt.