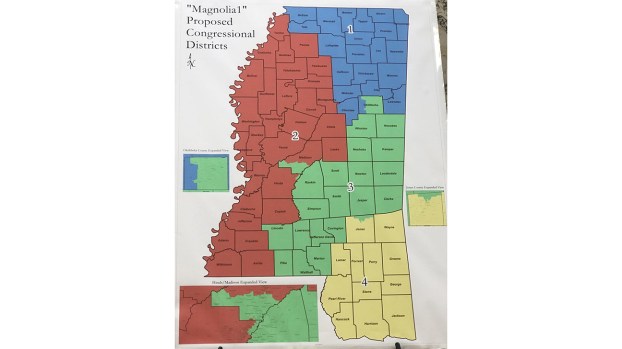 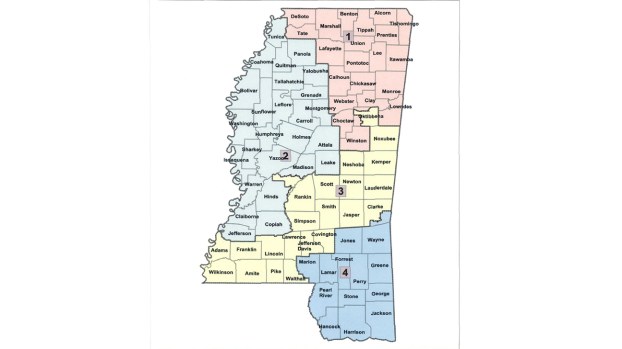 The 2nd Congressional District will meander the almost length of the state along the Mississippi River under the congressional redistricting plan approved 76-42 Thursday by Republicans in the House of Representatives.

The House plan is likely to be taken up next week in the Senate. If it passes there, it will be sent to Gov. Tate Reeves, who can sign it into law or veto it.

Republicans enjoy a supermajority in both the House and Senate, meaning they can pass redrawn district maps and other key legislation without a single Democratic vote.

House Democrats, who oppose the plan, said it created a district too large for incumbent 2nd District U.S. Rep. Bennie Thompson — or anyone — to adequately represent. The proposed district would move a large portion of southwest Mississippi from the 3rd to 2nd District.

Rep. Robert Johnson, the House Democratic leader from Natchez, a city that would be affected, offered an alternative plan that would have moved all of Hinds County and a portion of southern Madison County from the 3rd to the 2nd but left southwest Mississippi in the 3rd.

Johnson said the plan offered by the Republican leadership “certainly is not compact. The district is almost 300 miles long, takes up nearly half the state. It is almost impossible for one congressman to represent the district.”

The district includes 40 of the state’s 82 counties and 40 percent of the land mass of the state.

House Pro Tem Jason White, R-West, who is on the Redistricting Committee and offered the proposal to the House, said redrawing the congressional districts was made more difficult because the 2nd District, which includes most of the Delta and portions of the Jackson metro area, lost 65,000 people. The other three districts all had slight population increases with the 4th, which includes the Gulf Coast, growing the most at nearly 5 percent.

White said the plan offered by Johnson splits fast-growing Madison County, which he did not want to do. On the other hand, White said it made sense to split Hinds, the state’s largest county in terms of population and also home to Jackson, the state’s capital city.

Johnson said Guest was not representing the interests of Jackson and Hinds County since he voted against bills that provide funds to help the capital city with its infrastructure needs.

White also said that it made sense to include areas of southwest Mississippi in the current 2nd District because it created a district along the Mississippi River where there were “communities of interest,” which is one of the mandates from the courts in drawing districts.

But Johnson countered southwest Mississippi, where he lives, depends on oil, timber and cattle like areas of the 3rd, while the current 2nd consisted of areas of metro Hinds County and the soybean, cotton crops and other crops of the Delta.

Thompson, the state’s lone Democratic and Black congressmen, had voiced support for moving all of Hinds into his 2nd District. Guest of the 3rd District opposed the move. The plan offered by Johnson is essentially the same plan proposed by the state chapter of the NAACP.

The plan approved by the House moves Adams, Amite, Franklin and Walthall counties in southwest Mississippi  to District 2. The only river county not in District 2 under the plan is DeSoto, a Republican-heavy suburb of Memphis in northwest Mississippi.

The state must redistrict every 10 years to adhere to population shifts gleaned by the decennial census, based on both federal and state laws. But after both the 2000 and 2010 censuses, the Legislature was unable to agree on a U.S House redistricting plan, leaving it to the federal courts to draw the districts. Legislative leaders have vowed not to let that occur this year.

The redistricting plan is the first piece of legislation taken up in the 2022 session which convened earlier this week. The reason for the urgency to take up the congressional plan is that elections are slated later this year and the deadline for candidates to qualify to run for the congressional seats is March 1. Legislators are expected to take up a plan to redraw their own 174 House and Senate districts later in the session since their elections are not until 2023.