MS universities got millions in pandemic relief; It’s hard to know how they spent it 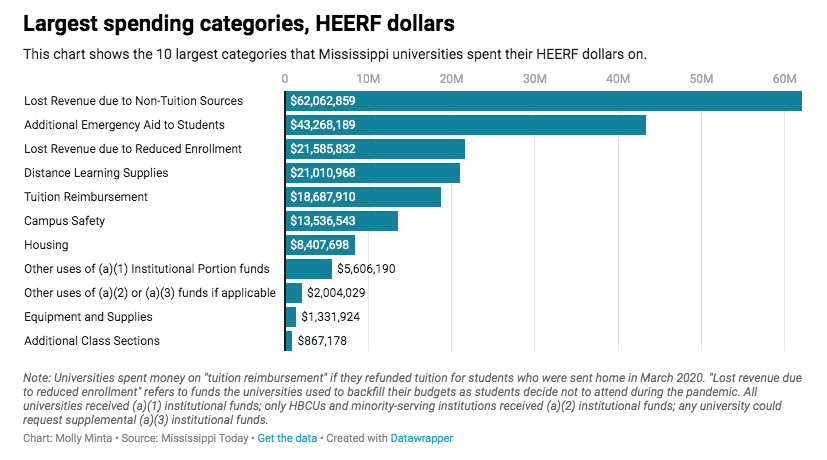 Mississippi’s eight public universities got hundreds of millions of dollars from the federal government to keep their doors open during the COVID-19 pandemic.

Nearly two years later, it’s hard to get a clear picture of what the universities did with those dollars, despite reporting requirements from the U.S. Department of Education agency tasked with overseeing the funds.

A review by Mississippi Today found several factors contribute to the patchwork transparency and accountability:

The stakes are high in accounting for these dollars in real time, because they were intended to help colleges, and the students they serve, to endure financial challenges due to the pandemic, said K.B. Melear, a professor of higher education finance at University of Mississippi.

“These monies are incredibly important for Mississippi institutions of higher education, especially now … as we move through the various challenges faced by the pandemic,” he said.

This uneven accounting is likely not unique to Mississippi. Last year, ProPublica explored how the federal government’s limited tracking has frustrated efforts by K-12 officials across the country to follow how their districts spent these COVID funds.

The U.S. Department of Education did not return Mississippi Today’s request for comment by press time.

The money in question comes from the Higher Education Emergency Relief Fund, or HEERF, a dedicated pool of dollars in each of the federal government’s three pandemic stimulus packages.

For their part, Mississippi’s eight public universities received $508 million. The universities were required to put at least half of that into students’ pockets in the form of direct payments.

The remaining funds — around $250 million — could be used for “institutional expenses” due to COVID-19, a broad category that encompasses spending on personal protective equipment, dorm closures, or technology for virtual learning.

Every three months, the Office of Postsecondary Education, a U.S. Department of Education agency, requires colleges and universities to publish quarterly reports in the form of spreadsheets to account for their institutional spending. In theory, this provides a clear picture of how a university has spent its institutional dollars. The spreadsheets contain 16 categories the universities can use to classify their spending, such as “providing or subsidizing the costs of high speed internet to students or faculty to transition to an online environment.”

In one another, the University of Southern Mississippi recorded spending $6.08 million on “replacing lost revenue” from non-tuition sources in a December 2021 report. That category can encompass anything from spending on a canceled theatrical performance to lost parking lot revenue. But nowhere in the report does USM say what, specifically, it spent that $6 million on.

It can be hard to get a clear picture even when the universities do describe their spending. In a September 2021 report, Mississippi State University said it put $3.8 million toward lost revenue. In the column meant for more detail, MSU simply put “Housing and university florist.”

These reporting requirements are lax in part because the federal government’s goal with these stimulus funds was to help students stay in college and help colleges keep their doors open, said Robert Kelchen, a professor of higher education finance at University of Tennessee.

“People were worried about colleges laying off employees or closing,” he said. “The main priority wasn’t necessarily tremendous oversight — it was to get the money out the door and have enough oversight that colleges aren’t ripping off taxpayers.”

The U.S. Department of Education maintains a database, called the “transparency portal,” of all education funds allocated by the three pandemic relief bills. The goal of the database is “to provide the public with transparent, searchable, and understandable data.”

According to the transparency portal, Mississippi universities have spent about $129 million in federal stimulus funds on institutional expenses as of Nov. 30, 2021.

The quarterly reports paint a different picture. Mississippi Today added up the spending reported in spreadsheets from all eight universities. According to Mississippi Today’s analysis, the universities collectively spent $198 million in institutional funds as of Dec. 31, 2021 — a $70 million gap.

The numbers don’t match for individual universities, either. A review of every quarterly report posted by Mississippi University for Women shows the school spent about $2.3 million in institutional funds as of Sept. 30, 2021. The U.S. Department of Education says MUW spent about $1.2 million as of Nov. 31, 2021.

Tyler Wheat, MUW’s communications director, told Mississippi Today that the quarterly reports are submitted to the department and the difference in numbers is primarily due to timing.

“Our quarterly reports on the website are correct,” he said. The U.S. Department of Education database “only shows the amount they have paid in reimbursement” which “are not requested until after the expenses have incurred.”