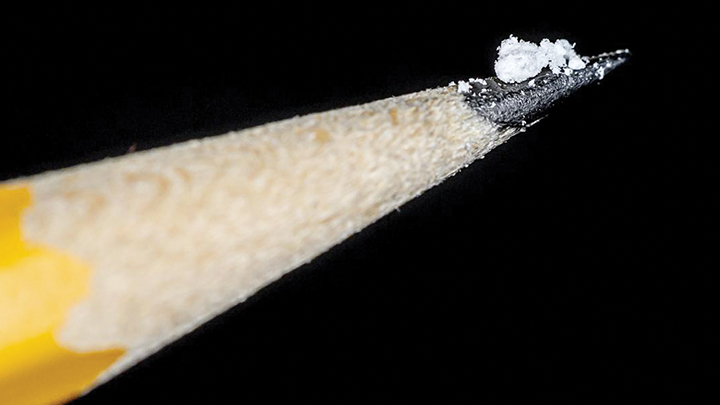 Photo by U.S. Drug Enforcement Agency 2 mg of fentanyl could be a lethal dose.

Congressman Michael Guest (MS-03) recently joined legislation that would increase the sentence to life in prison of those found guilty of smuggling the drug fentanyl into the United States.

The U.S. Drug Enforcement agency defines fentanyl as “a synthetic opioid typically used to treat patients with chronic severe pain or severe pain following surgery.” A Schedule II controlled substance similar to morphine but about 100 times more potent, fentanyl is a legitimate drug that should always be used under the supervision of a licensed medical professional.

Fentanyl overdoses have become the leading cause of death for adults aged 18-45, according to a report by Families Against Fentanyl that analyzes data released by the Center for Disease Control (CDC). According to U.S. Customs and Border Protection (CBP), fentanyl seizures increased 134 percent in FY21 compared to FY20.

However, illicit fentanyl is primarily manufactured in foreign clandestine labs and smuggled into the United States through Mexico, the DEA reported.

“It’s time we take a hard stance against the smuggling of this deadly drug” Rep. Michael Guest said. “With this legislation, we’re letting drug smugglers know that if they choose to bring fentanyl into American states, communities, and homes, the price they’ll pay will be severe.”

Co-sponsor Congressman Tim Burchett (TN-02) said smugglers aren’t deterred by the existing penalties for trafficking fentanyl into the United States. “You better be ready to spend the rest of your life in prison if you willingly bring illegal fentanyl across any of our borders,” he said. “No longer can we shrug off this criminal activity that is responsible for killing hundreds of thousands of Americans.”

Fentanyl is being mixed in with other illicit drugs to increase the potency of the drug, sold as powders and nasal sprays, and increasingly pressed into pills made to look like legitimate prescription opioids, reported the DEA. “Because there is no official oversight or quality control, these counterfeit pills often contain lethal doses of fentanyl, with none of the promised drug,” DEA officials said.

The DEA also reported that there can always be a significant risk that illegal drugs have been intentionally contaminated with fentanyl because of its potency and low cost. Drug dealers mix fentanyl with other drugs such as heroin, methamphetamine and cocaine, which increase the likelihood of a fatal interaction.

Drug trafficking organizations typically distribute fentanyl by the kilogram. One kilogram of fentanyl has the potential to kill 500,000 people.

Two milligrams of fentanyl can be lethal. A DEA analysis found counterfeit pills ranging from .02 to 5.1 milligrams (more than twice the lethal dose) of fentanyl per tablet. And without laboratory testing, there’s no way to know the amount of fentanyl in an individual pill or how much may have been added to another drug. This is especially dangerous because of fentanyl’s potency. Scrutiny showed that 42 percent of pills tested for fentanyl contained at least 2 mg of fentanyl, considered a potentially lethal dose, the DEA said.

Bob Evans (D91, MS) said fentanyl can be used to alleviate severe pain and when that’s under a doctor’s administration and on label, it serves a good purpose. “But mixing fentanyl with other illicitly-used drugs in order to increase [a] “high,” as is being done more frequently here in Mississippi, is already illegal.

“Judges already have the necessary tools (sentencing) to combat this nemesis. But, if I can be shown credible evidence, rather than just election-year political pandering, that tougher sentencing for illicit fentanyl use will be an effective deterrent, I certainly won’t object to it.”

The Centers for Disease and Prevention reported that from June 2020 to June 2021, more than 100,000 Americans died from a drug overdose. And in Mississippi, the problem is growing. “We lost 529 Mississippians in 2020 to drug-related overdose deaths,” said Col. Steven Maxwell, the director of the Mississippi Bureau of Narcotics, to WTOX television.

He said fentanyl was the most common drug used by overdose victims and that during the last year, the DEA seized more than 9 million illicit pills containing fentanyl.

“Of these 9.5 million pills, four out of 10 contained a lethal dose of fentanyl,” Maxwell warned. “That’s about 2 mg and the DEA says that’s about 10-20 granulates of salt. So you had a four of 10 chance of dying as a result of someone using those pills as tested by DEA.”

How dangerous is fentanyl? More than 96,000 people die from drug overdoses in a year, ranking just below diabetes in highest death count. Opioids are involved with 72 percent in seven out of every 10 overdose deaths. Since 1999, 1 million drug overdoses killed almost a million people. In January 2021, drug overdose deaths exceeded homicides by 306.7 percent.

According to Drug Abuse Statistics’ website, “[there]is a wide range of overdose death rates among the states; the highest concentration is located in the northeast, straddling the Great Lakes and Mid-Atlantic regions.”

The danger of drug misuse had Michael Guest (MS-03) joining other legislators recently to introduce a bipartisan bill by Teresa Leger Fernández (NM-03) called the “Campus Prevention and Recovery Services for Students Act” to aid higher education institutions implement programs to prevent alcohol and substance misuse on campus and support those with substance use disorders. It was introduced Tuesday.

“It is critical that we focus on ending substance misuse on college campuses,” Guest said in a press release. “Evidence-based recovery programs provide those impacted by alcohol and drugs with a path to escape addiction.”

Lincoln County Sheriff Steve Rushing said that fentanyl has not reared its ugly head much in his jurisdiction, but he’s heard from other law enforcement officials of how bad things are there. “We haven’t seen much of it here,” he said, “but it’s right around the corner. It’ll get here eventually and it’ll be bad.”