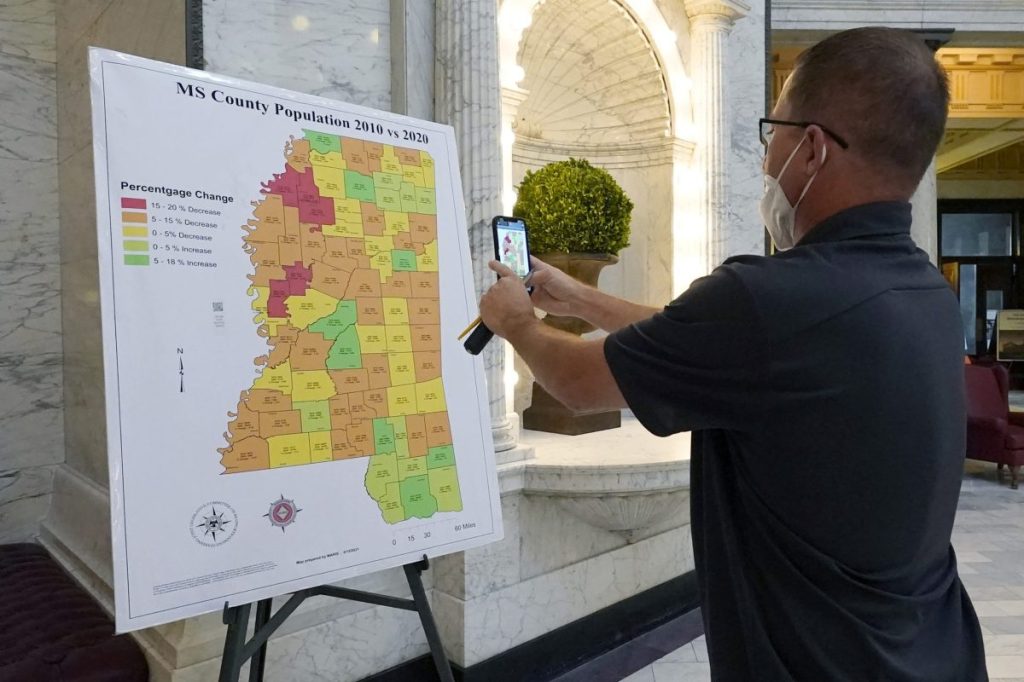 Photo by Rogelio V. Solis A visitor to the Mississippi Capitol in Jackson, uses his cell phone to photograph a graphic of the state that depicts census growth or loss in each county over a 10-year period.

The state chapter of the NAACP is asking a three-judge federal panel to rule on whether the U.S. House redistricting plan recently approved by the Legislature and signed into law by Gov. Tate Reeves is constitutional.

The judicial panel will hear further arguments on the issue before ruling.

Carroll Rhodes, a Hazlehurst attorney and veteran of many redistricting litigation battles, maintains that the plan approved by the Legislature with a Black majority 2nd District that runs nearly the length of the state along the Mississippi River is not constitutional. He maintains the sprawling district will make it more difficult to elect an African American when Bennie Thompson, the state’s sole Black U.S. House member and the 2nd District incumbent, opts not to seek re-election.

Rhodes made his argument Wednesday in front a three-judge federal panel that has had jurisdiction of the state’s congressional redistricting process since the early 2000s when the Legislature could not agree on a plan. The Legislature also could not agree on a plan 10 years later to redraw the districts to adhere to population shifts ascertained by the 2010 U.S. Census.

This year the Legislature did pass a plan, and during Wednesday’s status conference in Jackson the panel of judges appeared ready to end its oversight of Mississippi’s congressional redistricting.

But Michael Wallace, a Jackson attorney representing the Republican Party, agreed with Rhodes that the three-judge panel should maintain jurisdiction long enough to hear the complaints of Rhodes and the NAACP. He said the panel could end its involvement, but it would not prevent Rhodes from filing a new lawsuit, necessitating the convening of a new three-judge panel comprised of members who would not have the background on the issue that the current judges have.

“It would be prudent for you to finish what you started,” Wallace told the panel, though he stressed he believes the plan approved by the Republican majority Legislature is constitutional.

He said there are questions about whether “the intent” of the Legislature with the plan it passed was to prevent African Americans from winning future congressional seats.

Rhodes argued that the Legislature violated one of the primary principles put forth by the panel of ensuring the compactness of the districts. He suggested that the judges could “tweak” the plan it adopted in 2011 to adhere to population shifts found by the Census while it heard the arguments of the NAACP.

Rhodes added the NAACP had proposed a plan that made those tweaks by adding all of Hinds County and a small portion of southern Madison County, a Jackson suburb, to the majority Black 2nd District. The plan approved by the Legislature instead added four counties in southwest Mississippi to the 2nd District, meaning the district encompasses almost the length of the state on the western border.

“The question becomes whether a Black candidate can raise the funds to campaign in a district that runs the length of the state,” Rhodes said.

The 2nd District was the only one of the state’s four congressional districts to lose population — about 65,000 people, according to the 2020 Census.

Appeals Court Judge E. Grady Jolly, a member of the three-judge panel, seemed skeptical of the claim that an African American candidate might not prevail in a district that has a Black population of more than 60 percent like the 2nd in the plan approved by the Legislature.

Rhodes indicated that Black voters in the four counties in southwest Mississippi added to the district might not turn out at the same level as those in some other parts of the state.

Wallace told the panel that it should allow the legislative plan to go into effect while hearing Rhodes’ arguments.

Both sides will present additional written arguments to the panel during February. The judges will have to make some type of ruling quickly since the qualifying deadline for candidates to run for Congress is March 1.