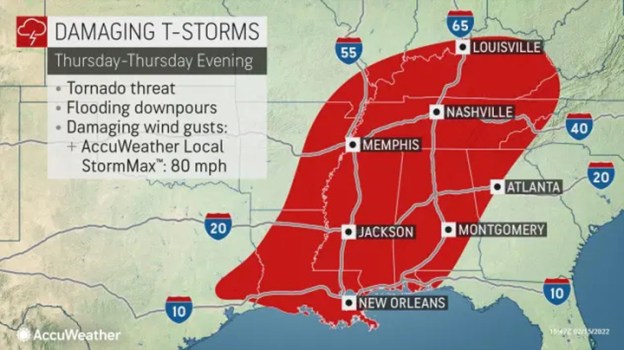 Image from AccuWeather / Damaging thunder storms are expected across the entire state Thursday, as well as surrounding areas, with threat of tornados, flooding downpours and damaging wind gusts up to 80 mph. 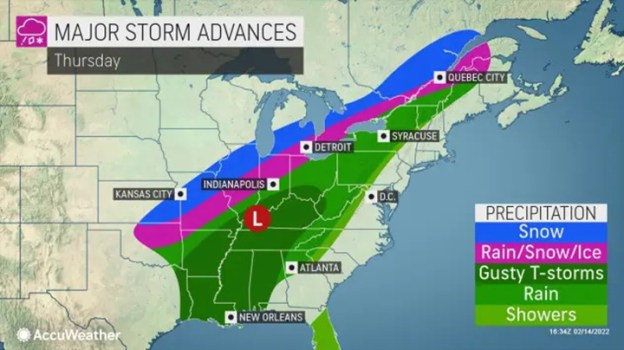 A severe weather and tornado threat is expected to move through Mississippi Thursday.

Forecasters have been watching out for a major severe weather outbreak for several days. The threat is likely to progress eastward from Louisiana, eastern Arkansas and southeastern Missouri through Mississippi, Tennessee, Alabama and western Kentucky. Severe storms may extend as far to the north as the Ohio River and as far to the east as the southern Appalachians by Thursday night.

The outbreak will be associated with a potent storm forecasted to swing out of the Rockies and travel across the Plains and Mississippi Valley. Its colder side will bring snow to the north and west. Its warmer side will bring risks of tornadoes in South Central U.S. Wednesday evening through Thursday evening, as well as violent thunder storms and “all forms of severe weather,” according to AccuWeather.com.

Powerful wind gusts up to 80 mph, flash flooding and large hail are possible.

In all, parts of 11 states will be under a threat of severe weather at some point this week.

The severe nature of the thunderstorms is likely to produce localized torrential downpours that can lead to flash flooding in the South Central states.