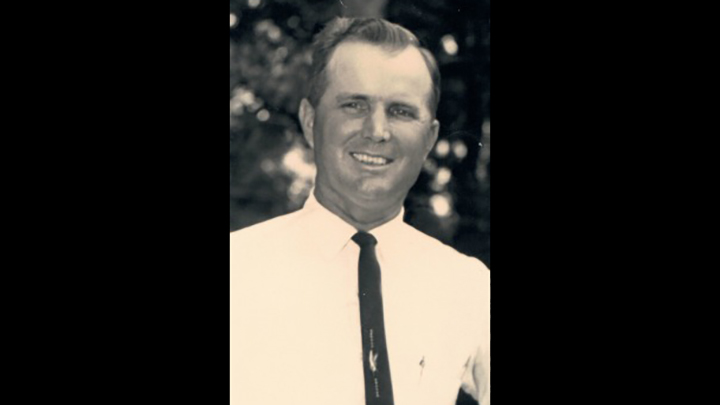 Mr. Burns, 98, of Brookhaven, went home to his Lord on February 16, 2022. Born on Sept. 11, 1923, he was the eldest child of Lydia Jewel Nix Burns and James Ele Burns. Throughout his life, Frank embraced all of his endeavors with thoughtful preparation, precision, and patience. He was content in his role as loving husband, father, grandfather, great-grandfather, friend, nurseryman, and community servant.

Frank loved Brookhaven and was a lifelong resident. During his high school years at Brookhaven High School, he was active in sports, playing varsity football under John King, for which King Field is named. He also excelled in the 440 yd. track relay, participating in the finals at MSU. Frank was an exceptionally good student in chemistry and math. He had several hobbies in high school, including 12 “patented” bee hives, model airplanes, taxidermy, guitar, hunting and fishing. His interest in gun collecting started with a Sears & Roebuck .22 rifle he bought with $8 he earned from selling watermelons at the roadside.

Frank attended the University of Texas in Austin, TX, majoring in mechanical engineering with a minor in math. His college career was interrupted in his junior year by World War II. He enlisted in the V-5 Program, which was a pool of aviation cadets waiting for a call into active training. He was assigned to a sea plane tender as a 1st division officer in the Caribbean Sea on the USS Shelikof. An honorary display of Ensign Burns’s military service is located in the Military Memorial Museum in downtown Brookhaven.

Prior to deployment, Frank was assigned to several training facilities across the country, one of which was at Ball State Teachers College in Muncie, Indiana, where he met his future wife, Catharine (Kay) Somers, at the college hangout. Frank says that he fooled the prettiest, sweetest, and most loveable woman in all of Indiana into marrying him. When the war was over, Frank and Kay settled in Brookhaven where Frank partnered with his father in the nursery business, Brookhaven Nurseries. He was president of the Mississippi Gladiolus Society and helped forge a powerful voice in dealing with the Illinois Central Railroad for “Railway Express” transportation of the “glads” to markets in Memphis, Kansas City, Indianapolis, Minneapolis, Iowa City, etc. The gladioli venture eventually grew into greenhouse production and a shrubbery yard and lasted until closure in 2016 when Frank was 93 years of age. This was his life’s work, “except working for Uncle Sam during World War II.” His knowledge, expertise, forward-thinking, and generosity helped shape horticulture practice in Mississippi and provided mentoring for many in the business.

Frank was a true southern gentleman, and, as such, was a man of many interests. Amid the demands of caring for living inventory, he carved out time for civic service, church, and hobbies. Combined with his curiosity, his mechanical skills led to creative and inventive projects that continue to delight. A keen interest was astronomy, which was seeded by a university course in celestial navigation. He built an 8” lens reflective telescope, enjoyed with his children and grandchildren and many clear nights, that is now housed in the Lincoln Co. Historical Museum. He joined the Brookhaven Exchange Club in 1948 and has been the club’s oldest member for some time. Because renting different rides for the Exchange Club Fair was a financial burden to the club and because Frank had a workshop at the nursery and a gift for designing and constructing, he built several fair attractions such as the Chunk & Dunk, Frolic, milk bottle throw, concession stand where he originated the “Curly Fry” recipe, the railroad and train that circles the fairgrounds, and a peanut boiler that holds 30 lbs. of peanuts. He received the “Mechanix Illustrated” Golden Hammer Award for building a Stutz Bearcat motor car. Frank built a half- cabin cruiser and restored a 32 ft. Chris-Craft boat, the “Frolic.” Among his favorite past times were dining with friends, attending the Exchange Club meetings, working in his shop, fishing, and swapping jokes with friends. Frank had an inquiring mind and a quiet way of giving of himself, his talents, and his time. He had the capability to sandwich enormous gifts of generosity into his daily activities.

Frank came to know the Lord as a youngster at Pearlhaven Baptist Church, and was an active member of Frist Baptist Church, Brookhaven, serving under seven pastors. He was a life deacon, serving as vice-chairman along the way. He also served as Chairman of the Finance Committee, as a member of the Building Committee for the current church sanctuary, as a Church Training teacher, and President of the Cecil Rhodes Sunday School Class. The Christmas poinsettia tree featured in Florist’s Review magazine was made up of 60 of the “Dark Red Annette Hegg” variety of poinsettias grown by Brookhaven Nurseries.

The Lord gifted Frank with many attributes. He read Scientific American like some people read the daily news, was a master of crossword puzzles, cooked a mean pot of boiled peanuts, and enjoyed mentoring whoever showed an interest in his endeavors. He had a flair with the written word and always sent a proper thank you note. He could, and did, write essays of family history. He was never without a notepad and a pocketknife. He was found many-a-day reading his Bible in the quietness of his office shack down by the shrubbery yard. Frank may best be described by his daughter, Jill. “Daddy recognized that within our community there are many fine citizens whose self-sacrifice, responses to duty, and other praiseworthy actions far exceeded his own efforts. That is why humility was one of Daddy’s many virtues. He was a quiet and gentle man. From it sprang his patience when the rest of us were hasty, modesty when flamboyancy surfaced, and mildness when he sensed demanding or argumentative situations, from which he’d quietly wander off. Daddy used wisdom in relating to others around him by not offending or dwelling on negative circumstances. He truly thought the best of everyone. He was a giver, not a taker, and a friend to many. He was an extremely hard worker and never let anything go unfinished, completing the task as well as he could with what he had or could make. He sought no praise or glory for his efforts. He thought things through, long and hard, before speaking or making a decision. He knew the value of a dollar and how hard it is to earn it. He makes lists. I’ve never known a more honest soul in my life. He lived contented.”

The family would like to express their deep gratitude to all of you who shared their lives with Frank and thus enriched his life. He would, no doubt, leave us with these words he frequently shared.

May the road rise to meet you.

May the wind be always at your back.

May the sun shine warm upon your face.

May the rains fall softly on your fields.

And until we meet again,

May God hold you in the palm of His hand.

Memorials may be made to First Baptist Church in Brookhaven.