‘They have chosen to fight it’: Mental health agency withholds records 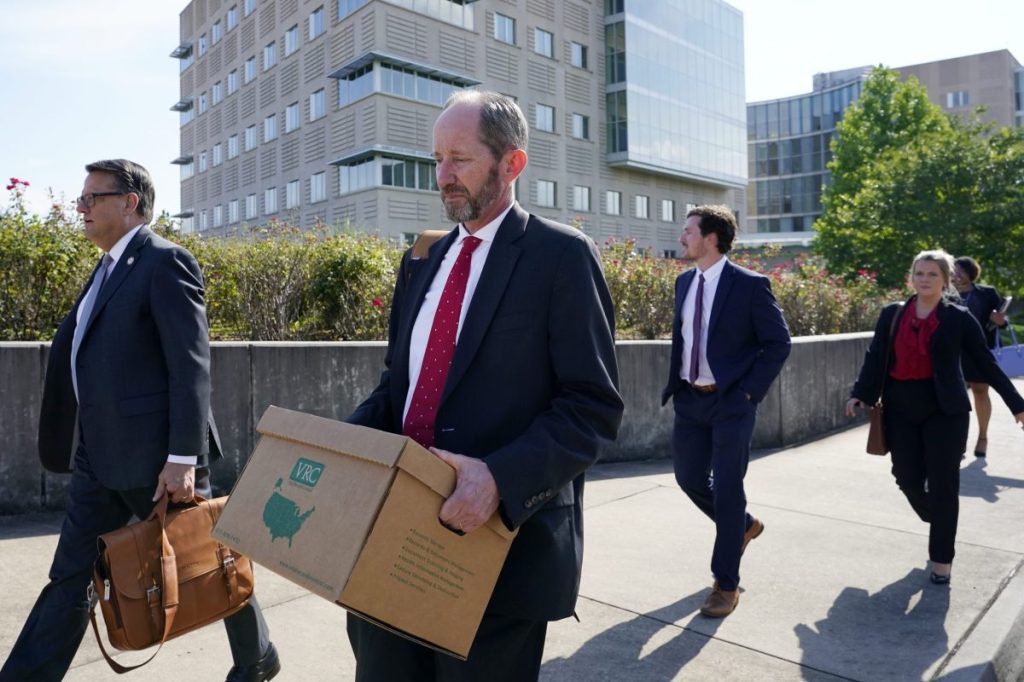 AP Photo/Rogelio V. Solis James Shelson, lead attorney representing the state, carries documents as he and his colleagues exit the federal courthouse in Jackson, following a hearing on updates about the status of the lawsuit over mental health services in Mississippi, Monday, July 12, 2021. The U.S. Justice Department claims the state has failed to provide adequate services in the community for adults with mental illness.

The facilities were dealing with staffing shortages similar to hospitals around Mississippi. And no matter how many colleagues they lost, staff who remained had to provide round-the-clock care to the same number of residents with serious mental illness or intellectual or developmental disabilities.

Like its counterparts in other states routinely do, the group requested records from the Mississippi Department of Mental Health to get a better understanding of what was going on inside these facilities. But the Department, arguing the organization was overreaching, blocked the effort – and now the two groups are duking it out in court.

Disability Rights Mississippi is the state’s “protection and advocacy (P&A) system,” charged by Congress with advocating for people with disabilities and investigating reports of abuse and neglect in programs that serve them. The group sent nearly identical letters to 10 mental and behavioral health facilities around the state, asking to see recent incident reports and to get them on a regular basis in the future.

The goal, executive director Polly Tribble told Mississippi Today, was to identify patterns and understand what residents were experiencing.

But DMH refused to turn over the reports. State lawyers claimed the group’s “boilerplate” letters didn’t demonstrate “sufficient probable cause” to justify a systemic investigation of the facilities.

Adam Moore, the communications director for the Department, said he can’t discuss pending litigation. The attorney general’s office also declined to comment on an ongoing case.

The lawyers for DMH argue the organization “simply hoped to embark on a fishing expedition” with its request for records. They say the letters, which didn’t mention the staffing shortage issue or describe the suspected neglect or abuse, didn’t justify access to the incident reports.

But to DRMS and their counterparts in other states, the case is straightforward: federal law gives these organizations broad investigative and monitoring authority. Reviewing incident reports is part of that work.

Why, Tribble asks, is DMH fighting to withhold the reports?

“It makes you wonder if they’re trying to hide something,” she said.

The history of the P&A system begins with Fox News host Geraldo Rivera.

Fifty years ago, Rivera was an investigative reporter for ABC News in New York. He took a camera to Willowbrook State School, a facility for people with developmental disabilities on Staten Island. The neglect and abuse he revealed there provoked widespread public outrage and led Congress to enact the laws creating P&A systems and tasking them with advocating for people with disabilities.

In each state, staff at the P&A systems have the right to visit facilities caring for people with mental illness and talk with staff and patients. They try to become known as a resource for families, and as a place to go with concerns about potential abuse or neglect.

Dave Boyer, managing attorney for community integration at the National Disability Rights Network, the D.C.-based umbrella group for the P&A systems, said they generally have broad latitude to get information about facilities.

He estimated that between 150 and 200 court cases have challenged their access to records, information and site visits over the last 40 years. In all but about 10 of those, the court sided with the P&A system.

“Overall, it’s very rare for a P&A to lose an access case,” he said.

Other times, they get calls from staff and family members.

A document filed in the lawsuit shows how this can work. On Nov. 10, DRMS notified the South Mississippi Regional Center in Long Beach that it was opening an investigation into the treatment of a resident, separate from its broader investigation at the center of the lawsuit.

“A contract employee stated that she had previously observed dried feces in the hair, in the ears, and on the cheeks of several residents when they were brought in for routine grooming,” the letter says. “She also noticed a ‘mold and mildew’ type substance on the scalp of the named individual.”

“The contract employee informed the nurse that the shampoo being used was alcohol-based and was likely causing great pain… when applied to her broken scalp.”

The resident is nonverbal.

An advocate visiting the facility also asked to see the area where residents receive grooming services and found it was “dirty” and “in subpar condition,” the letter said. DRMS asked for records and staff interviews to carry out its investigation.

But not all of the reports DRMS receives focus on a single resident or incident. Tribble said last year, DRMS started getting reports of staffing shortages leading to neglect at DMH facilities.

DMH director Wendy Bailey has sounded the alarm on staffing shortages, too. In her December presentation to the legislative subcommittee allocating funds from the American Rescue Plan Act, she said staffing issues at state-run facilities and at the community mental health centers were affecting care.

Some facilities, like the crisis stabilization units, could reduce the number of available beds to ensure adequate staffing. That’s not possible at the facilities serving people with intellectual and developmental disabilities.

“For our IDD (intellectual and developmental disabilities) regional programs, you can’t decrease bed capacity,” she said. “That’s their home. We have to have the staff there to take care of the individuals 24 hours a day, seven days a week, with high needs.”

In an email to Mississippi Today, Moore said the agency had lost more than 1,000 employees since January 2020 – about a sixth of all employees at the time.

In August 2021, DRMS requested incident reports from the Mississippi State Hospital in Whitfield, near Jackson, which operates 311 hospital beds and a 276-bed nursing home.

Reviewing all the incident reports at a facility could help DRMS identify patterns and problems, Tribble said. Maybe one staff member’s name would show up again and again. Maybe there would be more incidents during a particular shift.

An attorney general’s office lawyer wrote to DRMS rejecting the request, arguing it was beyond DRMS’ authority and would be “unduly burdensome.’

In October, DRMS sent letters requesting incident reports from nine other facilities. The state’s attorney rejected those requests, too.

“Unless DRMS’ request is narrowed to a complaint or sufficient probable cause justifying a request for incident reports, including but not limited to, a date the alleged incident occurred and an individual specified in its request, none of DMH’s programs will comply at this time,” wrote special assistant attorney general MaCall M. Chastain.

Boyer said the P&A systems in some states get incident reports regularly “just as a matter of course.”

Nancy Anderson, associate director of the Alabama Disability Advocacy Program, DRMS’ counterpart in Alabama, said her organization has done what DRMS attempted to do here: launch what they call a “systemic investigation” after receiving tips that pointed to a possible pattern of abuse or neglect.

“Based on triggering complaints, we use the systemic investigation to more broadly look at the patterns and practice of that facility to see what is going on,” she said.
Devon Orland, legal director at the Georgia Advocacy Organization, said her organization regularly obtains incident reports through records requests as part of their work to monitor facilities. Those reports are redacted, but if GAO staff notice something troubling, they request and receive an unredacted copy.

If Orland hears about a series of issues at a facility, she will assert probable cause to open an investigation and make a broad request for records like incident reports.

“Our access authority is very broad,” she said. “And there’s a reason for that: because history has demonstrated that people who are pushed away and out of society are really vulnerable to abuse and neglect … If we don’t have access, we can’t protect (them).”

One of the major arguments the state has presented is that DRMS has failed to show it has “probable cause” to broadly investigate abuse and neglect in state-run facilities.

In a filing on Feb. 8, DMH said the letters sent to the 10 facilities did not contain any specifics to support the records being released.

In other cases, where DRMS has provided more detailed information about why it is seeking records tied to a specific instance of suspected abuse and neglect, DMH has shared it, lawyers for the agency maintained. They cited the Nov. 10 letter in which DRMS described the conditions at South Mississippi Regional Center as an example of a viable probable cause claim.

But Tribble and other P&A staff around the country say courts have said P&A systems generally get to determine whether they have probable cause to investigate.

“We’re kind of the judge in this,” Boyer said.

In January, U.S. District Judge Carlton Reeves invited the U.S. Department of Justice to weigh in by March 14.

In an email, a Justice Department spokesperson told Mississippi Today the department is aware of Reeves’ invitation but can’t comment further.

DMH has been fighting the Justice Department in another case in Reeves’ courtroom for nearly six years. In 2021, Reeves ordered the appointment of a monitor to evaluate DMH’s progress in providing more services at the community level, instead of institutionalizing people at state-run hospitals.

The Attorney General is appealing Reeves’ order to the 5th Circuit. It argues the state has already expanded community services and that Reeves has installed “perpetual federal oversight” of the system.

To mental health advocates in Mississippi, the two court battles suggest DMH isn’t interested in having anyone look too closely at its work.

“We all speak about transparency,” Tribble said. “Well, this is a time when they can be transparent, and they have chosen to fight it.”