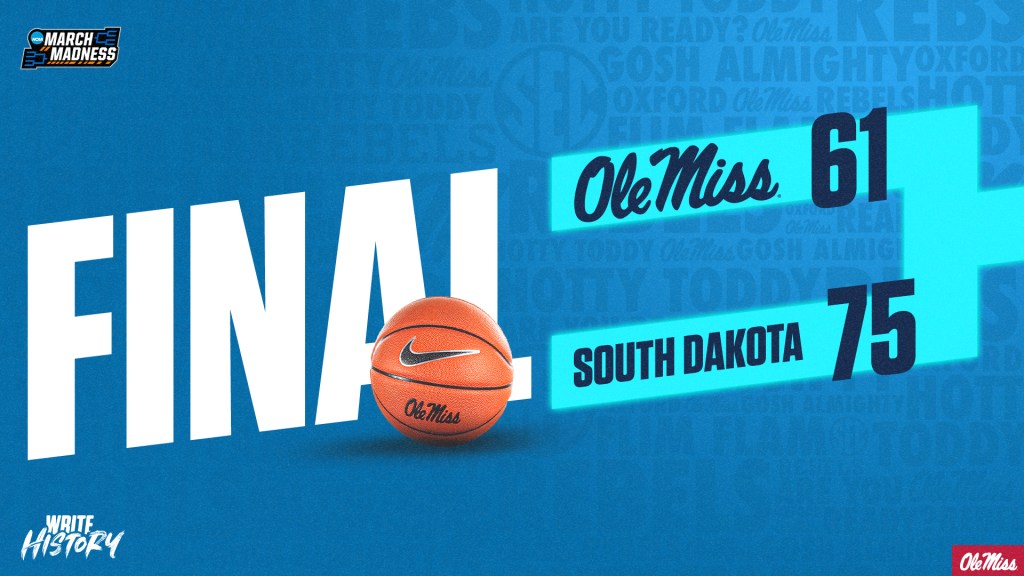 In its first NCAA Tournament appearance in 15 seasons, seventh seeded Ole Miss was unable to slow down a hot shooting 10th seeded South Dakota team in the first round of the NCAA Tournament, falling 75-61 to the Coyotes Friday afternoon from the Ferrell Center.

“Kudos to South Dakota. It was their time. They were clearly the more experienced team and looked like it,” said head coach Yolett McPhee-McCuin. “I am extremely proud of our team. It gives me great joy this program is headed in the right direction.”

Ole Miss (23-9, 10-6 SEC) struggled to deny South Dakota (28-5, 17-1 Summit), as the Coyotes shot at a remarkable 55.8 percent clip from the field. Carried by the SEC’s Sixth-Woman of the Year in Angel Baker, the senior came off the bench to drop 23 points to lead the Rebels. The outing was her sixth 20-point performance of the season.

Defensively, Shakira Austin racked up 11 rebounds for her 13th double-digit rebound game of the season. She added three blocks for her 56th multi-block game of her career.

The Coyotes could not miss within opening minutes of play, hitting its first four shots from the field to create an early 9-2 lead over the Rebels. Ole Miss’ defense kicked in to force South Dakota into a drought, while triples from Baker and Snudda Collins assisted the Rebels to make a run. Scoring half of its 16 points in the paint put the Coyotes up through one over the Rebels, 16-12.

It was Lashonda Monk who broke a 13-0 Coyote run, as the Rebels worked to chip away at a 14-point deficit as the break approached. Ole Miss utilized the three ball to make a charge and pull within seven off of nine straight points. Despite going without a field goal for the final five minutes of the second quarter, South Dakota maintained its lead at 36-27 headed into halftime.

Ole Miss remained persistent to comeback, yet South Dakota continued to go on short scoring bursts to extend its lead. The Rebels found themselves in foul trouble, as they struggled to find a presence in the paint resorting to attempting to score on the outside to gain some momentum, trailing by 12 points through three.

The defense dug in to hold the Coyotes scoreless for over two minutes, while offensively the Rebels strung together a 6-0 run with four and a half minutes remaining. Yet, this spark was not enough as the Coyotes continued to knock down threes to walk away with the 75-61 victory over the Rebels.

Ole Miss concludes a remarkable 2021-22 season with 23 wins, including 10 in SEC play for only the second time in program history and its 18th NCAA Tournament appearance.

“We will be back,” said McPhee-McCuin. “We will continue to grow.”