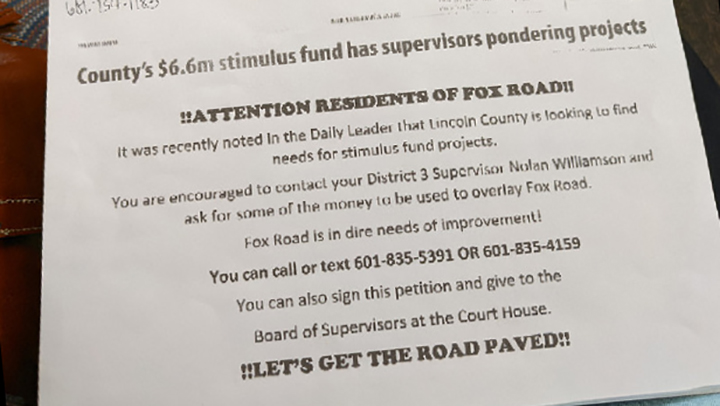 A Lincoln County supervisor says waiting for the Legislature to release funds to fix roads is “just typical Mississippi politics and it’s so, so sad.”

District 3’s Nolan Williamson made the comment during the Board of Supervisor’s regular meeting this week.

Mississippi Today complained in September 2021 that Mississippi was now “flush with money” and not spending it, saying “House Speaker Philip Gunn … has not publicly offered any major spending or policy plans for ARPA money.”

District 5’s Doug Falvey, board president, said he’s hearing from locals that they worry if anyone complains about finally receiving the funds or what they want them used for, the county might lose the money.

“That’s what they ask me,” Williamson said. “They say why ain’t you spending that money? They look at us.”

District 1’s Jerry Wilson added a “yep” and a nod at that.

Wilson pointed to the room’s lectern and said “why can’t [state legislators] come here and talk to us? [Gunn] needs to come right here. It’s ridiculous. We need to do something about it.”

County Attorney Will Allen said they just have to tell the public that “we have to wait for them to stop fighting (on the state level). There’s nothing else we can do about all that, but wait for them to figure it out and stop arguing.”

Indeed, because of Mississippi’s calm resourcefulness of waiting and watching, many county roads just might get fixed after all.

And it’s not too soon for some residents.

During the Lincoln County Board of Supervisors meeting Monday, the issue of roads roared into the room after Williamson mentioned getting constant texts claiming he wasn’t “spending money fast enough” to fix particular roads that social media posters wanted fixed.

Williamson’s frustration stemmed from social media posts and physical fliers by some Fox Road residents who described how they wanted their own road to be a focus of American Rescue Plan Act funding. The fliers asked concerned residents to call or text Williamson and ask him to spend the money since “Lincoln County is looking to find needs for stimulus fund projects,” the fliers stated.

Supervisors are not looking for projects, they said; they have stated numerous times in the past few meetings, which were reported in The Daily Leader, that they have enough on their lists as it is. All of the supervisors’ wish lists were turned into the state months ago, supervisors and County Engineer Ryan Holmes said during the Monday supervisors’ meeting.

Ironically, Fox Road is No. 1 on Williamson’s particular list, he said, and it, along with Melba Mason Road, always has been.

“Fox and Melba Mason roads are the top two on my list,” Williamson said in answer to those who seem to think the supervisors have no idea what they should use the funds for. “I have 311 miles to consider (on roads) and those two are my top consideration.

“But the public doesn’t know that because we have to sit here and wait for those guys in the state legislature to stop arguing and release the money.

“I mean, it’s a shame that for the very first time, this county has 100 percent of the money to do these roads, but we have to sit and wait. It’s just typical Mississippi politics and it’s so, so sad.”

The issues many Mississippi counties and cities face if they want to use funds for roads and bridges is that the Mississippi Legislature is still debating how to match state funds with county funds.

“Mississippi House members are developing a framework of how they want to spend $1.8 billion in federal COVID-19 relief funds, but seem content on waiting until the end of the session to reveal specifics,” Mississippi Today reported a year ago.

Further, the House has passed bills since then, but hasn’t actually put amounts into the bills.

The U.S. Treasury sent the first funds June 1, 2021. Afterward, in January 2022, a change occurred that let entities use the funds for roads and bridges. This means Lincoln County officials were wise to wait to spend the first part of the money they received last summer on something else when it was always roads they wanted to be the top priority.

The funds now await appropriation by the 2022 Mississippi Legislative session per Mississippi House Bill 109. They remain in a special fund in the state treasury until such times as appropriated for use in accordance with the ARPA.

Lt. Gov. Delbert Hosemann recently said that waiting any longer to assign how funds will be spent will be money out of the pockets of Mississippians.

“Record-level inflation may be an even bigger problem” concerning the ARPA funds, he said. “Every day we fail to spend these funds, the cost of construction goes up and the value of our ARPA funds go down. … If we wait another year to appropriate ARPA, we have less time to complete the jobs and we have fewer available contractors, subcontractors and civil engineers. All states will all be competing for the same labor pool and we will be the last to start.”

In the past few weeks, supervisors have specifically mentioned how they wanted to use the entirety of the funding for roads and bridges. The fliers in question at Monday’s meeting seemed to reflect the petitioners misunderstanding of recent Daily Leader stories specifically stating that supervisors did have paving plans per each district, but until the federal government finally agreed upon what the money could be spent on, supervisors couldn’t spend it on roads and bridges.

However, when it came to expressing concerns, at least two people heavily involved in the public petitions refused to comment publicly about their issues about their Fox Road paving issues. One of the people who asked not to be identified said the group wants Fox Road overlayed or repaved, saying neither had been done in more than 40 years.

Williamson said that on the roads he wants to fix, a serious problem is that there has been 400 to 500 acres of timberland that’s been cut, which equals out to 16-20 trucks carrying four to five loads of logs a day. “Those roads are not made for that,” he said, the frustration evident in this voice. “It’s going to cost more than $1 million to overlay [Fox Road] from one end to the other,” he said, mentioning he wished they could get things going immediately.

County Administrator Daniel Calcote said the supervisors made their lists some time ago, cognitive of the needs of their districts. “It takes a lot of planning, but they know their districts,” he said. “They have to make sure, though, that their plans fit into the federal rules.” He added that Holmes had been working with entities to get the ball rolling on the first projects.