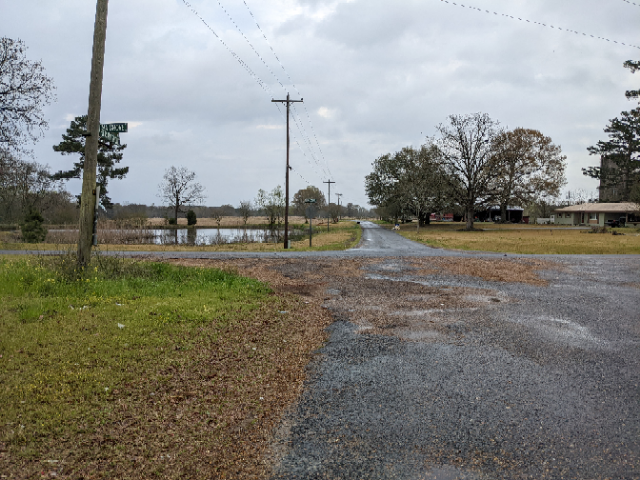 The intersection of Pleasant Grove Drive and China Grove Drive has loose pea gravel patches that one resident says is dangerous. Photo by Angela Cutrer

Robert Wendell Kyzar felt strongly enough about road issues in the county that he attended in person at the supervisor’s meeting Monday to discuss his concerns. He spoke to supervisors about loose pea gravel and how he feels it has become a matter of life and death.

“My brother-in-law ran that stop sign trying to stop and it could have killed him,” he said as he showed photos of the abrupt, sudden intersection at China Grove Drive and Pleasant Grove Drive. “That intersection has been there since it was a gravel road and it needs fixing. It’s dangerous. I want to show you some photos of the way these roads are being fixed.”

The photos concerned the corner of China Grove Drive and Pleasant Grove Drive, where Kyzar said pea gravel patches are not sticking, causing cars to shift and windshields to break.

“I’ve got too many cars, my wife would say,” Kyzar explained. “Thirteen times I’ve had broken windshields from that road. In fact, I had a windshield replaced last week and on my way back home, the pea gravel broke that one, too.” He further said he’d put four new windshields in in the last three weeks alone.

District 4’s Eddie Brown explained how patches in the roads could be of pea gravel or stone, but it’s the weather and the mix that matters in the end. “Stone stays in the hole,” he said. Williamson added that “you never know what you are going to get now with mixes. You used to know, but now you don’t.”

Kyzar said when he’s tried to be reimbursed for windshield damage, the state told him that “riding the roads is a privilege and busted windshields were a road hazard” and they wouldn’t pay.

“It’s patched with pea gravel,” Kyzar said, his annoyance apparent. “I told Nolan [Williamson] how I felt about this and he threw down his pencil and seemed aggravated with me and I don’t think that’s the way to handle this. I made these photos after I called him.

Kyzar said he wasn’t asking for reimbursement on the windshields anymore. He was wanting a better way to patch the roads. “I’m trying to get someone’s attention,” he said. “What good are you doing if your fix doesn’t last a month?”

Kyzar agreed that, yes, when the roads were all gravel, there were problems with broken windshields as well, but “you couldn’t speed like people do now,” he said. “Everyone drives like it’s I-55.

“I realize that what y’all got going on up here, well, a windshield is nothing. But I tell you — before I get 12 miles from town, it’s another one broken. I just feel like it’s passing the buck and that’s how I feel about it.”