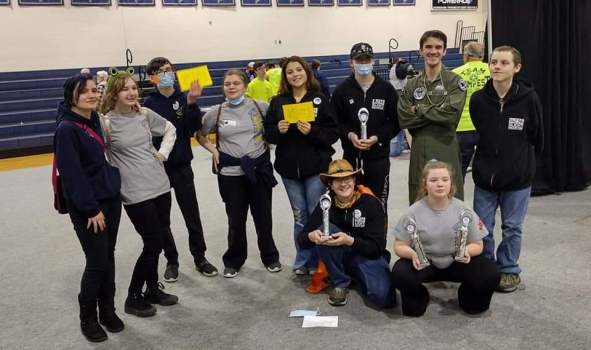 Photo submitted Receiving a golden ticket is a tradition and a symbol that they have advanced from their league to the state level. 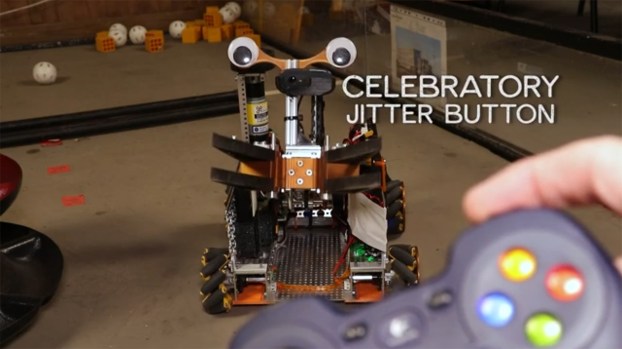 Photo submitted The group’s robot is named Jitters. Pictured at the Mississippi Southern League Tournament, Jitters sometimes “malfunctions” with a motion of the neck, Beth Davis said. Programmer Nick Davis intentionally added in a jitter on purpose to fool other teams into thinking they are winning. 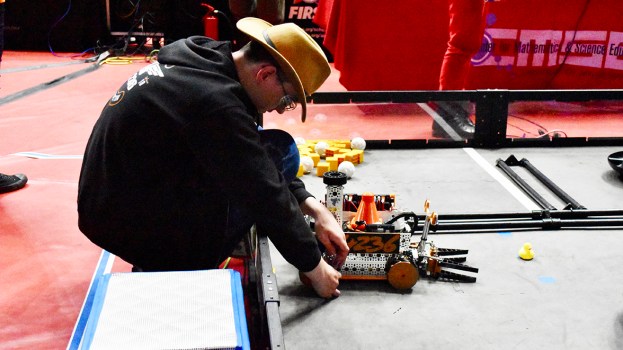 Photo submitted The group’s robot is named Jitters. Pictured at the Mississippi Southern League Tournament, Jitters sometimes “malfunctions” with a motion of the neck, Beth Davis said. Programmer Nick Davis intentionally added in a jitter on purpose to fool other teams into thinking they are winning.

Slight Malfunction and Technocats pair up to take top score

A community youth group of students is headed to Houston in April after winning the local and state level of community robotics competitions.

The local robotics teams “Slight Malfunction” and Bogue Chitto’s “Technocats” received the top score of 268 in Mississippi. That means the team is packing up to compete April 19-24 in Houston as the Mississippi state champions and captains of the winning alliance in the Mississippi Southern League.

Slight Malfunction comprises seventh through 11th graders from home schoolers to students at Loyd Star Attendance Center. They’ve also had students from Parklane Academy and North Pike Middle School in the past, but when the coaches moved, the group relocated in the Wesson area.

In 2017, their rookie team started out at the bottom compared to other Mississippi teams. They worked their way up, often partnered with Bogue Chitto Attendance Center’s team, Technocats, who graciously allowed them to share a space for building and practicing.

The team had several competitions to conquer on their way to the championship:

The team is now headed to Houston for the FTC World Championship in April.

“Robotics is an international robotics competition,” Beth Davis said. “We always brag about our first season, when we were in McComb in 2018, where we say we were ranked 72 out of 65 teams. Yes, we were that bad.

“In our second season, we came to be ranked 15 out of 66 teams. Last year, our third season, we won the prestigious Inspire Award for the Mississippi Southern League, which is the highest honor in FTC Robotics. We went on to place second at the Mississippi State Championship, but the World Competition was canceled due to the pandemic.”

Over the summer, the coaches moved to the Loyd Star area, which meant losing most of the team members, Davis said.

“This year, we started off with only one veteran team member and four new rookies,” Davis said. “[And now] it is amazing to have the honor to go to the World Championships. With great leadership – our team captain, Nick Davis – and students willing to learn, we have realized that this is the hardest fun we will ever have.”

Erica Spencer, mother of Macy and Noah, said she’s thrilled with the group itself. “I couldn’t be more proud of all of these kids and their accomplishments,” she said. “Allowing my kids to be a part of FIRST and joining Slight Malfunction Robotics team has been the best decision I’ve ever made.” She thanked the coaches for “pushing these kids to be their best.”

“It has been a privilege to watch our son come out of his shell and step up as a leader of the team,” Davis said of her own son, Nick. “To stand beside him as he leads this team to the World Championship is an honor. He will do great things in this world.”

The group is raising money for their Houston competition. You can visit its Facebook page “FTC Team 14236.”