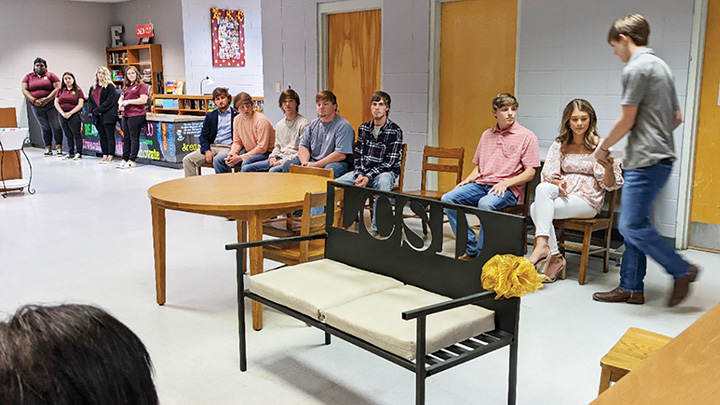 Photo by Angela Cutrer Molly Goldman’s Enterprise work-based and welding students made a bench, which was donated to the school.

Ag educator Molly Goldman told board members of the Lincoln County School District at its recent meeting that her work-based and welding students had a surprise for them. Moments later, a few of her students came into the room bearing a handmade bench, complete with a big bow.

Goldman also told the audience her students had worked hard all year: 124 of the 177 students scored higher or the highest on the WorkKeys test, a precursor to the ACT test in terms of skill measurements.

The Central Office received approval of the emergency closing of West Lincoln school at 10 a.m. March 2 due to the lack of water stemming from a community water line break. Central Office received further approval to grant administrative leave with pay for all full-time employees and part-time employees with a regular or daily schedule due to the emergency. Another emergency involved severe weather March 22. The board granted additional administrative leave with pay for that date as well.

The office also received permission to advertise for bids and to conduct bid openings for dust control, propane, trash bins and waste management projects. Bids will be presented for approval at a later day.

Technology Director Kenneth Wallace’s request about an agreement with Brightbytes Inc. regarding data sharing was approved, as was Enterprise Principal Terry Brister’s recommendations for a Natchez field trip April 6-8 for a convention for ENT FBLA and the issuance of a check to cover those expenses.

The board reviewed personnel listings, approving reappointments for all schools. However, the board declined to adjust a lease payment agreement for 2022 as recommended by Stan Long, 16th Section land manager, and Steven Williams, forester.