Could Lincoln County’s courthouse get a new name? Group seeks to rename complex for murdered man 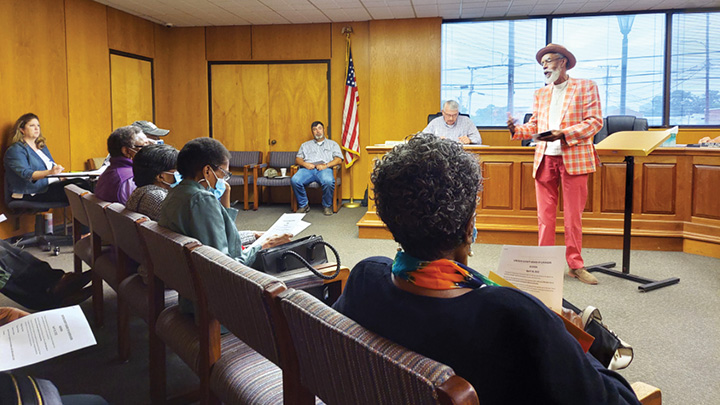 Photo by Angela Cutrer / Joe Smith addressed the Lincoln County Board of Supervisors and gathered citizens recently to request the board to consider renaming the county’s government complex in honor of Lamar Smith.

A group of citizens joined the Lincoln County Board of Supervisors Monday to ask a special request: Rename the very courthouse they all sat in after a man murdered on its lawn back in 1955.

Lamar Smith was a farmer, activist and World War I veteran helping those in the black community vote absentee. Many of the community feared attempting to vote in person, so Smith stepped in to bring the votes to the courthouse.

Once he arrived, a scuffle broke out between him and three men. It wasn’t long afterward that Smith lay bleeding from a gunshot wound to the side. He bled to death on the courthouse lawn.

Dick Scruggs wrote in the Mississippi Free Press that “the FBI later estimated that there were 50 to 75 potential witnesses, and not one would testify about what they saw … The FBI reopened the Lamar Smith case in 2008 as part of a new cold-case initiative for unresolved civil rights-era murders, but closed the case in 2010 because all three had died.”

The group at the supervisors’ meeting Monday entered quickly and reverently to take their seats. Three of them chose to speak to an attentive and empathetic board about how the renaming could bring about some sort of justice for Smith and those who cared about him.

Joe Smith brought up the subject of renaming the Lincoln County/Brookhaven Government Complex for Lamar Smith, “even if you just put his name in there somewhere.”

County Attorney Will Allen told Joe Smith about the Mississippi marker the board had been working to have installed on the courthouse lawn. He said he’d been working with two different family factions that had different ideas about what should be put on the plaque. Without that agreement, the plaque cannot be created.

The group in front of the supervisors Monday was the third such family and friends group to speak to the board.

Allen agreed, as have the supervisors, that placing the memorial plaque would be at least “something to recognize the wrong that was done,” but Allen said he wasn’t sure how they would go about even beginning to rename the courthouse. However, he told the group that he would look into it.

Roy Smith, who said he had no known relation to Lamar Smith, spoke because, as he said, he felt he had a lot in common with Lamar Smith, who he described as a “community servant, decent, honest, hard-working family man, a man of conviction.” He further stated that Lamar Smith died “right on the steps of justice, and in the face of justice.”

“We can’t change history, but collectively, we can make history by naming the building in honor of Lamar Smith,” he added. “It would be a historical moment in Lincoln County history, and Mississippi history, and, of course, American history. To memorialize this building for Lamar Smith would go far in bridging the gap of racial divide in Brookhaven and Lincoln County.”

Lamar Smith’s step-granddaughter, Alma Pittman, stood silently in front of the supervisors, too emotional to speak at first.

“Any time we talk about [this], the pain comes up like it was yesterday,” she said. “I saw my grandmother suffer. She never got over it. It would be nice to have recognition of my grandfather’s [sacrifice] by the state my grandfather was murdered in.”

Board President Doug Falvey thanked the group for their input and the men and women silently and reverently left the way they came in.

In the hallway outside the boardroom, the group quietly spoke among themselves before agreeing to be photographed. Then they each left the courthouse where, more than 65 years ago, a man bled to death in sight of almost 100 people.

No one helped Lamar Smith then. The group of people who spoke to the supervisors hope they can find a way to help spread the word and keep the memory alive of a man who died for doing what most people take advantage of — the right to vote.