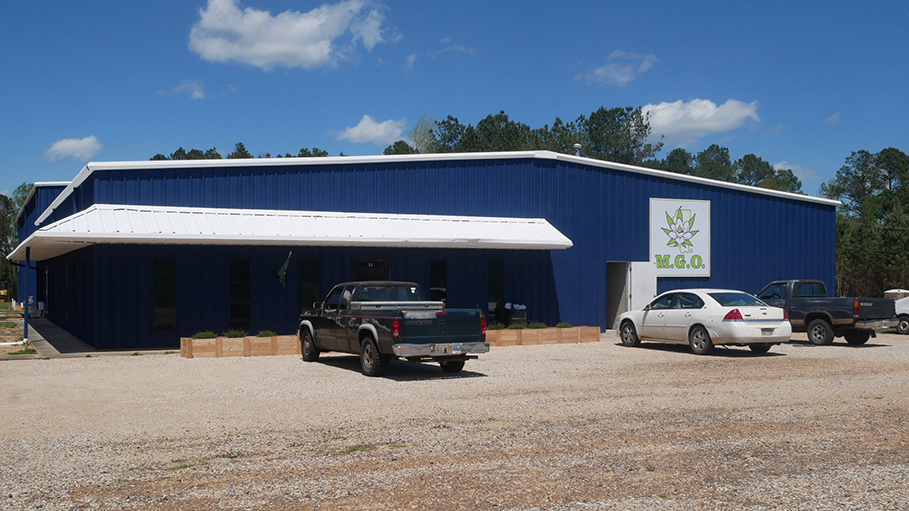 At 52 Industrial Road in Prentiss sits a former tire shop that was being transformed way before February, when the governor of Mississippi signed into law legalized medical marijuana.

The bill was a long time coming, but this summer Jefferson Davis County will open  one of the first state medical marijuana growing factories.

On March 31 the Lincoln County supervisors opted out of having anything to do with medical marijuana. Supervisors mentioned they don’t want recreational marijuana use to become a norm, though most agreed that medical patients needing pain relief should have access to it.

However, most of the supervisors were dead set against it. Period. Little discussion.

Tom Moore of Moore Companies had no issues with medical marijuana: It’s the law here now and he’s a businessman.

His new Mississippi business in Prentiss is called M.G.O, which stands for Mississippi Green Oil Company. It sits on 11 acres and he’d welcomed partnering with others.

“We looked at a lot of places, but the [city] was very instrumental in me coming up here,” Moore, of D’Iberville, said. “I’m from the coast – and I’m scared of hurricanes.” He laughed for a moment before adding “They found us a building. We painted the outside blue and hung up the Prentiss flag.”

And they are now here to stay, he said.

While many other places balk about anything to do with medical marijuana, Prentiss opened its arms widely to embrace those who wanted to create businesses in their industrial park.

“We lost a lot of jobs and have struggled ever since,” Prentiss Mayor Charley Dumas said. “So when someone wants to help with our stagnant economy, I consider it an opportunity for us. If it doesn’t work out, well, we’ve tried things before. But there have been no negative comments to me about having a medical marijuana business here. It’s the law and it’s a business and it’s located in the industrial park.

“Tom has been open and up front about what he wants to do in Prentiss and he’s offered all kinds of ways to help the community. He’s focused on becoming part of the community and he seems sincere. We are glad to welcome his company.”

During a tour of the new plant, Moore said he’s excited about the possibilities.

The building had been completely gutted and was rising again like a phoenix in the industrial park. Workers moved lumber around, creating vast new rooms under the watchful eye of foreman Deanna Matthews. On tall ladders, other employees created false ceilings in giant rooms situated for growing, for inspection, for planting, for studying.

It will have a reception area so that people feel comfortable when visiting. It will have an office for Mike Yarborough, the executive director, that’s decorated in a “little wild rock’n roll direction.”

Packaging rooms will be ready for M.G.O. processed items, but will also package other companies’ grows as well. There will be two kitchens in the business. A well-known bakery will be involved with creating products; Moore isn’t ready to announce that partnership yet.

M.G.O. will have a total of 19,000 plants growing within the facility at any given time, four or five times a year. They’ll use seeds from the original plants so that they never have to buy seeds again. There will be a cure room for the more than two dozen different strains of plants.

A fertigation room will help plants get their nutrients. Fertigation is the process of directly applying fertilizer to a crop through an irrigation system.

They are already planning to put another building up that will suit the use of aquaponics, which combines two growing methods – aquaculture and hydroponics – to create a self-contained, well-balanced ecosystem. It’s a more unique way of growing method and it’s extremely popular in other countries.

Craig Adams, the vice president of the company, is the quiet man at M.G.O., but he’ll be involved in its running and supervision of 20-30 employees, which will include a botanist, a veterinarian and a chemical engineer.

The director of operations at M.G.O., Winston Ceasear, is excited not only about Mississippi Green Oil Company opening in Prentiss, but the opportunity to create further business opportunities as well. He’s working on apps for customers to use, as well as for law enforcement education.

Moore wanted to prove he wants to be a good neighbor. His company bought a house downtown in Prentiss and they’ve even joined a local gym. “We are not here for the short term,” he said. “We want people to feel comfortable with us. We are in business just like everyone else.

“We bought a house because we’ll be coming and going and we are invested in Prentiss, and in Mississippi. We’ve definitely invested in one particular restaurant. Just ask Winston.”

Winston Ceasear has fallen in love with Williams Good Ole Days Buffet in Prentiss (“best fried chicken you’ll ever eat,” he said) and he tells everyone he meets how much he loves eating there. But Ceasear is also in love with what M.G.O. will do for Prentiss, for Mississippi, and maybe across the country.

“We are in it for the long haul,” he said. “Even before the law passed, we were here getting started.

“We want to ease the minds of the residents and we want to be a positive representation of the business by bringing in safeguards.” He speaks of the casino-like security inside and outside of the building and electronic doors that will require certain type keys.

“I’m excited about all the things we can do here and the partnerships we can make with others, whether it’s concerning bakeries or manufacturing or products from other companies,” he added. “We can do everything right here in this building.”

Cannabis contains roughly 500 compounds, 70 of which are psychoactive. THC, or delta-9-tetrahydrocannabinol, is the main psychoactive ingredient in the marijuana plant (the part that makes you “high.”)

The level of THC in a plant varies based on the strain – the part of the plant used and how it is processed for consumption. M.G.O. will use 25 different strains of plants, each specifically used for some healing or taste quality.

Also present is a substance called cannabidiol, known as CBD, which is an antioxidant and has properties that are thought to protect the brain. It’s also not psychoactive like THC. CBD is sold all over the state presently – in gas stations, health offices and some doctor’s offices.

“Products like cannabis oil are made from strains of marijuana already bred to be high in CBD and low in THC, although THC still is a part of the equation,” reported PolitiFact. “

Medical marijuana is bred for its medicinal factors, which means the “high” is removed from the equation. Because of that fact, recreational users probably wouldn’t have much interest in it.

Everyone’s been waiting for the state to release the new information. And on Monday, the preliminary rules and regulations finally came through.

Though Mississippi is in the early stages of the medical marijuana business, there is money to be made in not only the cultivation, but the processing, transportation and dispensing of such medicine.

A marijuana-specific website, mjbizdaily.com, reported April 12 that the total U.S. economic impact from marijuana sales in 2022 is expected to reach $99 billion – up more than 20 percent from last year – and upwards of $155 billion in 2026, according to analysis from the newly published MJBiz Factbook. That counts legal recreational marijuana as well.

That means that there are a lot of dollar signs for companies willing to invest in medical marijuana, as well as for the communities willing to welcome them into their industrial parks.

But these are early days, when potential businesses still have to work to change the minds of those who don’t yet embrace marijuana as a medicine rather than just another recreational device. And that takes time, and it takes patience.