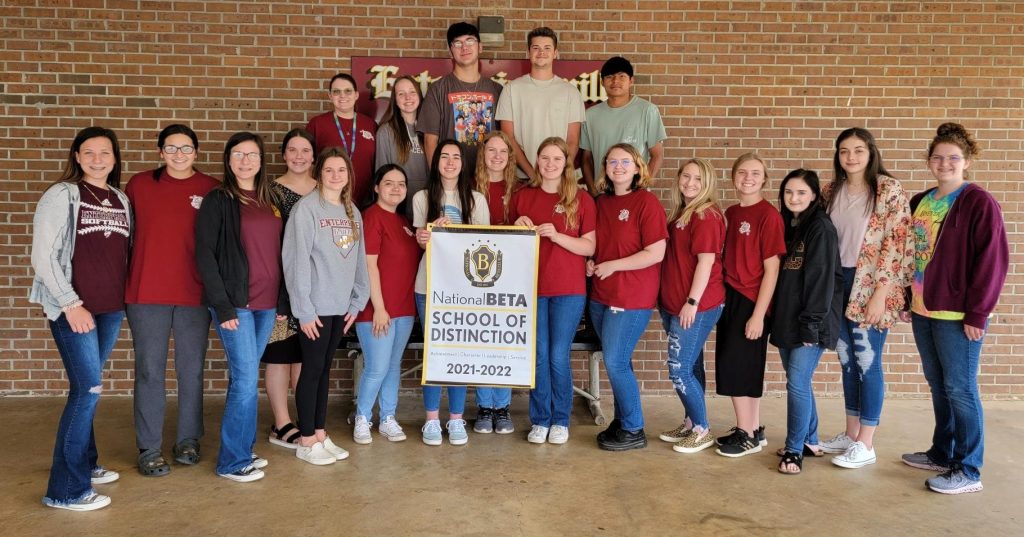 The National Beta School of Distinction is an honor for Beta clubs striving toward academic achievement, exemplary character, demonstrated leadership and service to others.

With an ongoing quest to instill these qualities in more students, the National Beta School of Distinction Award is designed to award those schools that show an increase in membership from the previous school year. Enterprise earned this recognition by increasing it’s club’s membership by at least 10 percent from last year.  This year, only 2,250 Beta clubs across the country received this award.

In a congratulatory letter to the school, CEO Bobby Hart said, “This national award speaks highly of your commitment to academic excellence and illustrates your dedication to preparing students for their future.”

Award recipients will receive a National Beta School of Distinction banner to display as a symbol of their accomplishment.

The National Beta School of Merit award is given to honor a club’s dedication and commitment to academic excellence. To achieve this prestigious honor, a school must include members from all eligible grade levels in their Beta club. This year, only 3,380 Beta Clubs across the country received this award.

In a congratulatory letter to the school, Hart said, “Thank you for your continued support of National Beta and commitment to developing future leaders.”

“This is my first year,” said the senior Beta sponsor, Bethany Abdul-Hadi. “I have enjoyed having the privilege of working with the Beta students at Enterprise. It is important for us to highlight the four pillars of the National Beta Club: service, character, leadership and achievement. Receiving these two awards is an honor for us and will help us to strive to continue to build character and serve our community.”

She said that in addition to having fun, the club members completed several service projects, including “Santa’s Library,” where they gifted books to kindergarten and special education classes for Christmas; “Campus Beautification,” where they painted hand rails around campus; and “Donations for BARL,” where they collected donations for the Brookhaven Animal Rescue League.