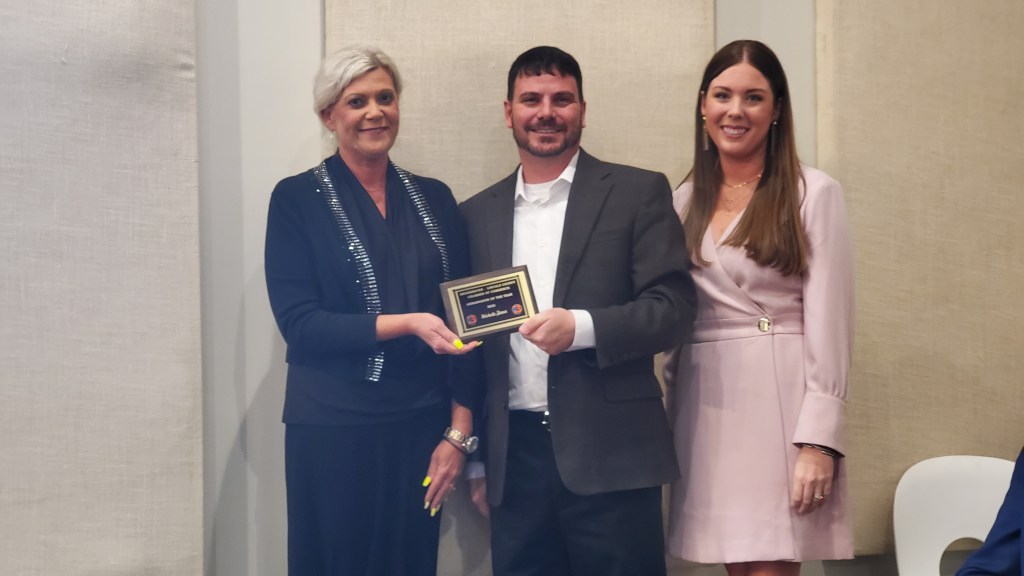 Photo by Brett Campbell / Michelle Tarver, left, was named “Ambassador of the Year” for 2022 by the Brookhaven Lincoln County Chamber of Commerce. She is pictured with Chamber President Garrick Combs, and Jillian Ricceri, the Chamber’s membership and tourism director.

Michelle Tarver of Flooring Warehouse was named “Ambassador of the Year” by the Brookhaven Lincoln County Chamber of Commerce during its March 24 annual banquet.

Tarver, a designer who has been with the company for four years, creates kitchens, bathrooms and any other room of interest. Flooring Warehouse boasts 30 years of local business acumen and was most recently voted “Business of the Month” for the month of April.

“I’m so honored,” Tarver said of her award. “I had no idea I was going to be honored that way and it was a complete and total shock to me. I didn’t realize until I sat down and read the program and saw my name listed.”

It’s no surprise to others, however, that Tarver’s dedication was honored in such a way. “Michelle is a dedicated ambassador who attends almost every chamber event,” said Garrick Combs, the chamber’s president. “She is always smiling and a joy to be around.

“We are proud to have her as part of the Chamber and part of our ambassadors. …[V]olunteers like her … [are what] make the Chamber so great in Brookhaven.”

However, the night was somewhat bittersweet for Tarver. “The banquet was on my mom’s birthday, and if you knew my mother, I’m very similar to her. I’m an only child and I spent a lot of time with [her].”

Her mother, Kathryn, died six years ago. She had taught school at Loyd Star for more than 30 years. “I rode to school with her every day. I think half of Lincoln County was taught by my mom. And everyone knows me — I’m still ‘Mrs. Lovette’s daughter,’” Tarver added with a chuckle.

She said what inspired her to volunteer was because she wanted to follow along in her mother’s footsteps.

“I, too, have a volunteer heart,” she said. “I’ve been a chamber member for two years. I wanted to join to help the town and the community through volunteering.”

For the last 25 years, she worked as a volunteer with the American Cancer Society and the American Heart Association.

Even with her work and her volunteerism, Tarver still finds time to visit with her father, Jimmy, a retired grocer. She and her husband, Skip, share a home with Foxy, a boxer buldog, here in Brookhaven. “I love this place,” she said. “It was a goal of mine to do all I could for the community, and that’s why I joined the Chamber.”

As a chamber ambassador, she attends ribbon cuttings and any other event that includes a business or organization. She takes her duties seriously because she thinks it’s a serious responsibility.

“As an ambassador, you have to make a point to do your duties,” she said. “You have to think about it as a priority because it is — it’s a priority. I put ribbon cuttings and such on my calendar, and it becomes a priority for that day — it’s done and I know where I will be at that time, barring some emergency.

“The role of an ambassador is a privilege. We are there to be positive and representative of the Chamber and the community. That’s important to me.”