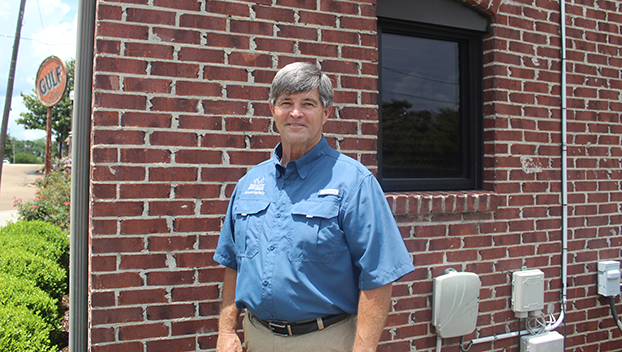 Monticello Native and Brookhaven resident Keith Kavitz is a land realtor with the McDaniel-Gray Realty group. He is an avid hunter and the vice president of Mississippi’s Southwest National Deer Association Branch. (Hunter Cloud | The Daily Leader)

BROOKHAVEN — Monticello native Keith Kavitz walked to the Lincoln County Courthouse, taking a shortcut past the Dungan Engineering Office on East Chickasaw Street close to where The Dart landed Thursday.

Kavitz is a land Realtor for McDaniel-Gray Realty and resides in Brookhaven, although he has spent time in Monticello and Collins.

Kavitz worked at a sawmill in Monticello before taking a job in Brookhaven at Rex Lumber. His career in real estate began 10 years ago when he looked for something he could do in retirement.

“Instead of sitting at home, I found something with a flexible schedule,” Kavitz said. “We work with anything at McDaniel-Gray. We are predominantly land but handle homes as well.”

He wore a blue shirt with RealTree United Country Hunting Properties embroidered above his chest, a hint to his love of outdoors.

Kavitz said he loves to hunt, fish and golf, a game he has played for 30 years in his spare time. He said he thought he would play once or twice a week but has not had the time since he semi-retired.

White-tailed deer are his favorite quarry during the hunting season. McDaniel-Gray broker and owner Robin McDaniel is the president of Mississippi’s Southwest National Deer Association Branch, and Kavitz serves as a vice president.

The National Deer Association is a good fit for business and an opportunity to meet people, he said.

As a vice president, he assists in organizing banquets, which fund community projects.

“There are a lot of adults and youth who have a desire to hunt, but they may not have someone to talk to. We try to advocate and get people involved,” Kavitz said. “I enjoy the peace and tranquility of hunting. The taking of a deer doesn’t matter to me. If it happens it happens. If I do have a young buck or a doe, I just like to watch them and watch the other wildlife I may encounter. The squirrels will keep you on your toes.”

Kavitz’s love of hunting might just extend to alligators this year. He has applied for an application for an alligator season permit after missing out on a hunting trip last year. His friend harvested an 11.7 foot alligator and has a full body mount.

“Alligator hunting is something I want to try. If I do like it, it will be something else I’ll be hooked on,” Kavitz said. “I was supposed to go last year, but I made three trips to New Orleans after the hurricane to help deliver food and gas for my kids. I told him I wouldn’t make it, and he hauled it in.”