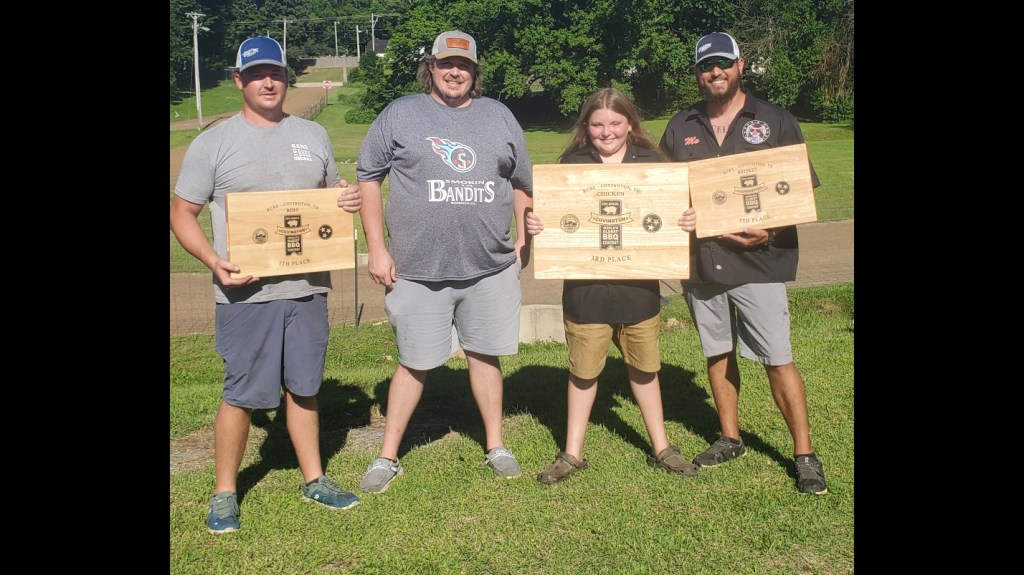 Most 13-year-olds spend their summers playing video games, sports, or swimming in the pool. But Riley Touchstone, of Brookhaven, is spending his summer cooking competition barbecue on the Kansas City Barbecue Society (KCBS) circuit.

On Saturday, June 4, 2022, Touchstone won more than $800 competing against some of the top barbecue cooks in the country. Touchstone placed fifth overall with a score of 695.38 at the World’s Oldest Barbecue Competition in Covington, Tennessee. He received three Top-10 calls in chicken, pulled pork and brisket. He also placed second in the chicken wing competition on Friday night.

“I’m really happy and very surprised with myself,” said Touchstone. “I’ve been cooking for two years, and my specialty is ribs.”

“We started in one competition, and it sounded fun, and we’ve been hooked ever since,” said Touchstone.

Touchstone was introduced to competition barbecue by his stepfather, Devin Morris, of Mo Betta Barbecue.

“Shoot, I’m blown away from it,” said Barnes. “When he got a chance to cook by himself, I took a step back so I could work with him, and he could be successful. I just wish his mother could have been here to see it.”

Lohman said there is no age limit for the master series circuit.

“I think it’s fantastic that we have young people come in to compete and they are doing well,” said Bill Heyen of Triple H BBQ. “People retire all the time and you need to have someone take over.”

Casey Tyler and Logan Lott of Smokin n’ the Bandits Barbecue Co., in Sumrall, paid for Touchstone’s entry in the Covington competition.

“We’ve eaten his food and it’s always been so good,” said Tyler. “When he got to cook in Brookhaven (Hog Wild Competition) and he was disqualified, we wanted him to have another opportunity.”

Touchstone beat his sponsor at the competition. Smokin n’ the Bandits placed 12th overall in Covington.

Touchstone said this summer he plans on working at Bandits Barbecue in Sumrall.

“It may be a small little place on the side of the road, but it’s some of the best barbecue you’ll ever eat,” said Touchstone.

When asked what his plans are for the future, Touchstone said he plans to save up money to buy his own cook trailer when he can drive and make cooking barbecue his career.

“People messed with me because I do barbecue,” said Touchstone. “But look at where I’m at now.”

Sen. Wicker presses DOJ on decision not to prosecute…