Local man, service station owner landed on the beaches of Normandy 78 years ago with several other local patriots 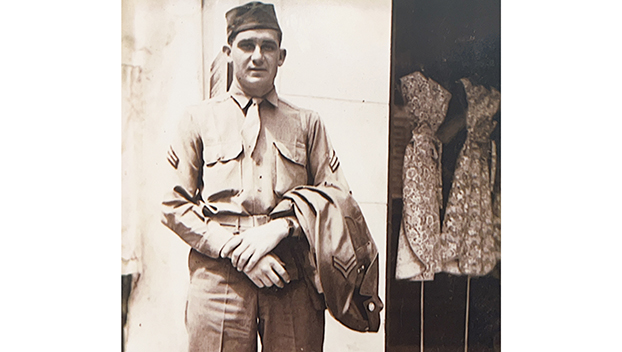 JB Russell owned Russell Grocery and Service Station on Old US 84 after returning to the US from World War II. He was one of several local men who landed on the beaches of Normandy on June 6, 1944. (Submitted Photo | Sara Nelson)

BROOKHAVEN — Monday marked the 78th anniversary of the Allied Forces landing on the beaches of Normandy in Operation Overlord to drive the Nazis out of France. Brookhaven native  J.B. Russell was one of the 156,000 allied soldiers who landed the morning of June 6, 1944.

Russell enlisted in the Army as a 22 year old and saw service in Luxembourg after D-Day as the Allied forces liberated the nation by September 1944. His daughter Sara Nelson was born in 1949 and said he never spoke about D-Day. However, she was able to visit Europe once.

“On the River Thames in England I got to ride a ferry. It brought me chills knowing he had been over there,” Nelson said. “I learned in Luxembourg they loved us for saving them. They had one of the prettiest cemeteries there for the soldiers who had died.”

Upon his return home he went to work at his sister’s grocery on Mississippi 583 before working at Sinclair as a mechanic. He would eventually open up a store Russell’s Service Station and Grocery on Old US84 before his death in 2002.

“I always think of him on D-Day or Memorial Day. We have a cemetery right in front of where we live,” Nelson said. “His grave is there as is my mother’s (Doris). The men served but the wives served by being at home and taking care of things here.”

The Remember When Lincoln and Lawrence Counties Mississippi Facebook members said these area servicemen participated in the Normandy Landings.