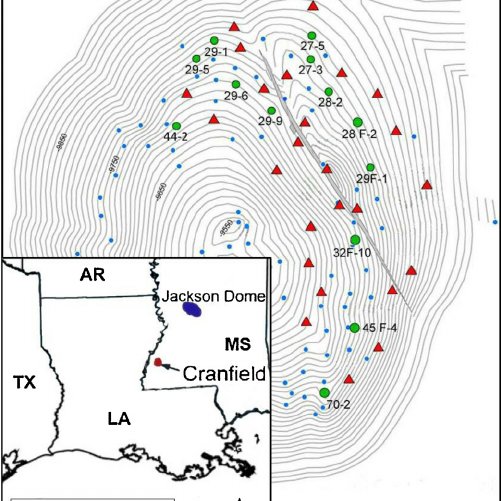 View information about the Jackson Dome.

For decades, natural resources from an extinct volcano called the Jackson Dome, about 3,000 feet below Mississippi’s capital city, have given the state a role in a multistate oil extraction business.

The operation, known as enhanced oil recovery or EOR, takes natural carbon dioxide from the Dome, sends it through a pipeline to oil fields in Mississippi, Louisiana and Texas, and injects the CO2 into the ground to push oil out for production.

Now, as the United States government tries to encourage emissions reduction from industrial sources, Mississippi lawmakers are hoping that the same pipeline, owned by Denbury Inc., will give the state a new role in the emerging carbon capture business.

Carbon capture and storage, or CCS, is an expensive method of reducing greenhouse gas emissions where a business separates CO2 from the other gasses it produces, and then transports it to a storage site where it’s injected into the ground for permanent storage.

While CCS has existed for years, it was too costly for companies to consider without any incentive. But in 2018, the federal government enacted a tax credit that greatly expanded incentives for emitters.

Mississippi House Energy Chair Rep. Brent Powell, R-Brandon, explained that companies hoping to receive the tax credit could potentially move to the state and use its existing pipeline for storage.

“What we’re hoping with this is that the landowners and the public can get some royalties for the storage, but we’d really like to see some industry come into the state that’s close to the pipeline,” said Powell, who specified electric and fertilizer plants as businesses he envisions offloading their carbon in Mississippi.

Under the program, both surface and mineral rights owners would be compensated, Powell, who wrote the bill, said.

This year, Gov. Tate Reeves signed into law House Bill 1214, a bill that would allow the Mississippi State Oil & Gas Board to oversee a carbon storage program in the state.

The U.S Environmental Protection Agency currently regulates carbon storage wells in most of the country, but now states are hoping to obtain authority to meet growing interest locally.

The Oil & Gas Board first has to obtain authority from the EPA, which it plans to apply for by the end of the year, the board told Mississippi Today. So far, just Wyoming and North Dakota have such a program, according to the Carbon Capture Coalition.

David Snodgrass, lead geologist for the Oil & Gas Board, said that eminent domain won’t apply to carbon storage in Mississippi. Eminent domain, which was restricted in the state after a 2011 ballot initiative, gives the government the power to take private property for a public use project without the landowners’ consent. Companies seeking to build a carbon pipeline or storage wells would first need to seek approval from a majority of landowners.

The new law allows the Oil & Gas Board to move forward with the project without a majority approval, but Powell said it would only apply if there are unresponsive or absentee landowners.

“If a guy’s adamant, ‘You’re not crossing my property,’ the Board’s not going to let (the company) cross their property,” Powell said.

Experts suggest that Mississippi, as well as its neighboring states, are prime locations for carbon storage because of their geology.

Susan Hovorka, a research scientist at the University of Texas’ Jackson School of Geosciences, explained that the pore space – tiny openings between grains of rock in the ground where gas can be stored – gives the Gulf Coast region an advantage over the rest of the country.

Beginning in 2008, Hovorka and other scientists conducted one of the first large-scale carbon storage tests in the U.S. at an oil field near Natchez owned by Denbury Inc.

Hovorka said while the program is new to most of the world, there’s a well-established practice for safely storing carbon.

“People can get some confidence because this is not new stuff being done for the first time,” she said, mentioning the world’s first commercial capture and storage project in Norway that began in 1996. “It’s old stuff being put to new uses to mitigate greenhouse gasses.”

But storing carbon and transporting it are two different things.

Last month, the Pipeline and Hazardous Materials Safety Administration, or PHMSA – the federal agency in charge of pipeline safety – announced its findings from a 2020 gas leak in Satartia, Miss. The report found multiple failures on the part of Denbury, and proposed a penalty of $3.9 million against the company.

After the episode in Sataria, some advocates are questioning whether the country is prepared for an increased demand on carbon transportation.

While both Powell and Snodgrass referenced the company as a proponent of starting a program in the state, Denbury officials told Mississippi Today it’s too early to say if it will begin carbon storage in the state. Denbury is currently securing spaces in other Gulf Coast states, including Louisiana and Alabama, but likely wouldn’t start storage until 2025.

Cole said Denbury would be looking at large pieces of land with few owners. He added that the company would use its existing EOR pipeline as long as it met the capacity needs for transporting carbon.

This article first appeared on Mississippi Today and is republished here under a Creative Commons license.