‘It’s only supposed to get hotter.’: Brookhaven faces heat wave 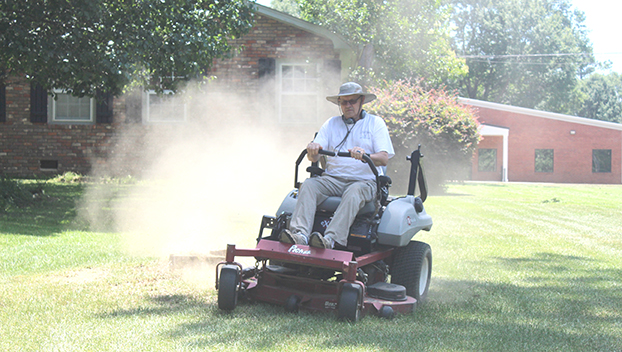 Jakie Brent cuts the grass for someone Monday morning. He said he tries to beat the heat by drinking plenty of water and using the riding mower instead of a push mower. He said he felt like the summer was only going to get hotter. (Hunter Cloud | The Daily Leader)

BROOKHAVEN — “It’s only supposed to get hotter.”

Jakie Brent said as he was cutting grass on South Street in Brookhaven Monday.

“I’m drinking lots of water and trying to stay cool. Riding on this mower helps versus if I was pushing,” Brent said. “When I was younger I don’t remember it being this hot and I stayed outside a lot back then.”

The National Weather Service forecasts continue to warn of high heat for this week in Brookhaven and Southwest Mississippi. Monday hit a high of 96 and according to the Farmers Almanac summer forecast Mississippi is supposed to be hot and humid.

NWS forecasts high temperatures ranging from the mid or upper 90s to low 100s with heat indices at 105 degrees. Fatigue and heat exhaustion are possible with prolonged periods outside.

Temperatures in Brookhaven hit 96 on Monday and are forecast to reach 99 by Friday. Sunday’s temperature was 92 which was one degree warmer than the normal temperature of 91 according to the NWS.

He said he runs an after school program in Hazlehurst during the school year but in the summer he takes them out on adventures. Mondays are a water day, Tuesday’s are adventure day to go to museums or state parks, Wednesdays are movie day, Thursdays are bike day and Fridays are arts and crafts day.

“We are getting out in the water today to keep them cool but I know we have to keep them hydrated as well,” Thrasher said. “I delay them from playing by getting them to eat and drink plenty of water. It helps avoid heat stroke and heat exhaustion. We have a saying ‘hydrate, feel great.’ When we get here we have water and in a little bit they will have some more juice.”

The kids ran through the splash pads, the playground and laughed in the summer heat. Thrasher said his summer camp is important in getting the kids out and having fun by socializing.

By getting the kids out and about each day he hopes they have something to write and talk about at school this year. He said what he does with the kids any daycare or church could replicate to help get the kids out of the house but also keep them cool.