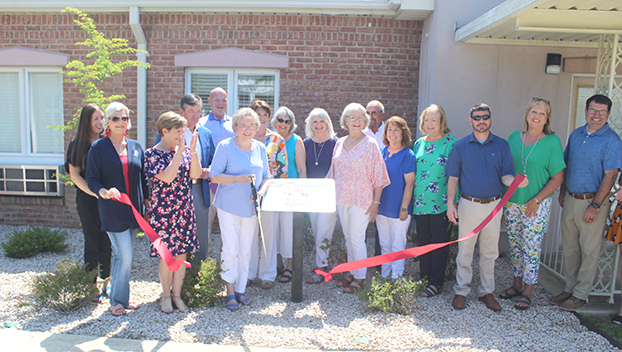 Pat Duckworth cuts the ribbon on her honorary garden at the Silver Cross Health and Rehab Center Wednesday in Brookhaven. Duckworth served as a chairman and member of the Willing Hearts, Silver Cross and Mississippi’s Order of King’s Daughters and Sons Boards. (Hunter Cloud | The Daily Leader)

BROOKHAVEN — Pat Duckworth began her service to the Willing Hearts Circle between 2005 and 2007 after she retired from the City of Brookhaven as a tax collector. Her years of service were rewarded Wednesday at Silver Cross Health and Rehab as they cut the ribbon on the Pat Duckworth Honorary Garden.

Her son Phil and Emry Duckworth hid in the back corner of the room as she was introduced. She served the Willing Hearts Circle, Silver Cross and the Mississippi Order of King’s Daughters and Son as a member and chairman and never missed a meeting.

Pat did not know they were dedicating the garden to her until they mentioned she was a member of First Baptist Church Brookhaven.

“I had no idea,” Pat said. “I found out today. When they said she is a member of First Baptist Church I thought ‘That may be me.’ It is overwhelming and feels undeserving.”

Jaime Gatlin was hired to renovate the garden area at Silver Cross and completed his work in six months. He said the wet winter slowed down some of their progress. The garden had been Pat’s idea and she came by nearly every day to check on its progress.

Residents would sit at the glass doors and watch the workers transform the garden.

Flower baskets hang from the sides of a pavilion, a bald cypress tree stands in the northeast corner and Dolly Redwoods grow in the southeast corner of the garden. They are trees that will grow for 100 and more years, Gatlin said.

Hawthornes and Possumhaws were planted by the resident’s windows as they bear berries in the winter. Hawthornes will also bear thorns to provide a place for birds to nest so residents will be able to see birds.

“The garden is everything I could have dreamed of. I wanted it to be interactive for residents,” Gatlin said. “We have plants they can pick and eat from like Muscadine and Blueberries and there will be flowers they can enjoy and water features.”