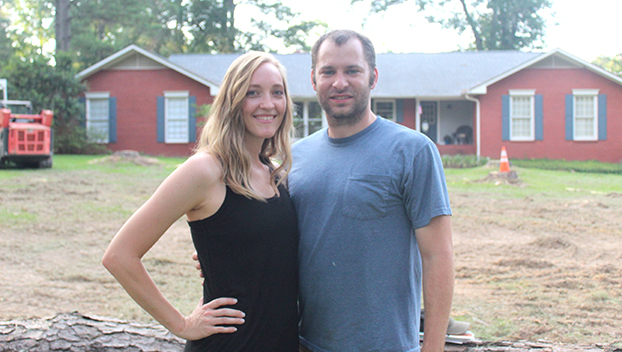 BROOKHAVEN — Blake Pickering sat on a cut section of pine trunk as he talked with his wife Nicole outside their home on Noble Drive close to where The Dart landed Thursday.

Pickering said during his campaign for Lincoln County Tax Collector he was bitten by dogs 13 times. He walked most of the city streets and either he or a member of his extended family knocked on 90 percent of the homes in Lincoln County.

“People were so incredibly nice. They would give me water and invite me into their homes. One lady gave me an umbrella,” Blake said. “I learned one thing. Me and dogs don’t get along. I would knock on doors and just ask God to please let them not have a dog. If they did, the dog would just gnaw on my leg a little. I made some really good friends randomly knocking on doors.”

He said he was proud of the number of people he got to know by knocking on doors. It has enabled him to draw connections to people in the community.

Blake grew up at the end of Zetus Road near the Franklin County line and graduated from West Lincoln. His wife grew up in Forest and she graduated from East Rankin. They met at Mississippi College.

He started out as pre-med for two years and then decided he didn’t want to keep studying. His idea was to study accounting with hopes of becoming a lawyer. “Like that didn’t require studying,” Nicole said teasingly.

After meeting his wife at MC, Pickering decided he didn’t want to be in school anymore and they got married after she graduated with a bachelors in kinesiology. Blake went to work for the Lincoln County School District as an assistant business manager. Nicole earned her associates in nursing from Co-Lin.

She decided she wanted to become a stay at home mom to serve her kids. Depending on the day, it can be a stressful responsibility but worth it, she said. It was God’s plan for her to be at home with the kids.

“Potential doesn’t equal purpose. Just because you have the potential to do something, it isn’t wasted if it isn’t God’s plan for you,” Nicole said. “I feel like our kids are our first mission field. It is the most important people He puts in our path. It gives me an opportunity to be with them and nurture them.”

Nicole grew up in church and has grown into our faith along the way to now. Blake had a different path to Christ. He said he had declared Christ as his savior when he was 12 but it wasn’t until 2018 that he submitted to God. It was a major turning point in his life.

He said now he has a closer relationship with his wife and is a better leader of his family. The family attends Pleasant Grove Baptist Church. In their free time, they like to hunt turkeys and deer and all of the kids love to fish.

Additionally, they volunteer as coaches for the youth leagues at the Lincoln County Civic Center. On the rare occasion they will sit and talk about what they are going to do with the evening if their kids are gone. Blake said some of their best dates are just ordering sushi and watching Netflix.

As parents, they have dreams for how they want to see their family grow. Noble Drive has been the perfect place to have a family, Blake said. Their neighbors are friendly and there are several families with kids on the street.

He said he can remember seeing a pack of kids on bikes riding down the street when they first moved, and it was like a Norman Rockwell Painting. The neighborhood is everything he could have imagined for raising a family. They also want their kids to follow God’s plan for their lives.

“I want my kids to grow up loving the Lord and wherever that leads them I’ll be happy with that,” Blake said.

“I want to be one of those families where people look at them like those parents did a good job. I want us to be one family where no one loses their way,” Nicole said.