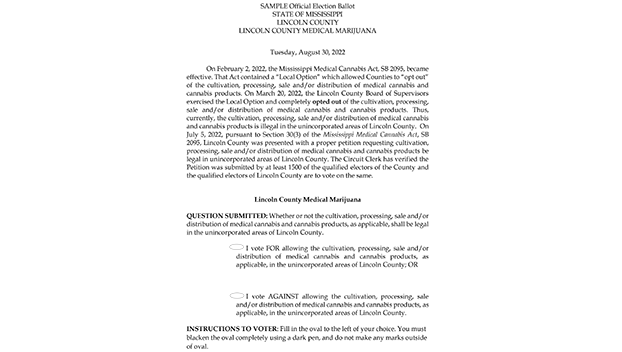 Here is a sample ballot for the special election.

BROOKHAVEN — Lincoln County voters will once again have an opportunity to speak at the ballot box on medical marijuana.

On Feb. 2, 2022, the Mississippi Medical Cannabis Act (SB 2095) went into effect. The act contained a “local option” which allowed counties and municipalities to “opt out” of the cultivation, processing, sale and/or distribution of medical cannabis and cannabis products.

A petition of at least 1,500 certified signatures could be submitted to the county to force an election on the issue to stop the “opt out.” One was submitted to the office of Lincoln County Circuit Clerk Dustin Bairfield during the final week of June, containing more than 4,200 signatures. The Clerk’s office was able to certify 1,500 of those signatures, verifying they came from qualified electors of the county.

“That means we have to set a date for a special election after 45 days of the certification,” he said of the topic of medical marijuana.

During its regular meeting Tuesday, the Board of Supervisors voted for a special election to be held and approved Tuesday, Aug. 30, for that election. Timothy Gipson, a member of the Stop the Opt group, was happy with the news.

“It feels good. It took us longer than we thought it would to collect signatures,” Gipson said. “We went out and gathered 4,500 signatures but started to release a certain number of people who weren’t registered to vote. We need people to get registered before the election.”

New voters must register no later than Monday, Aug. 1, in order to be able to vote in the special election. Absentee voting in the Circuit Clerk’s office will begin Monday, July 18, during regular office hours. Absentee voters will also be able to cast ballots on two Saturdays — Aug. 20 and 27, from 8 a.m. until noon. Mail-out absentee voting will also begin Monday, July 18, for those age 65 and older, disabled, military or temporarily living outside the county (work-related or students).

To register to vote, visit the Circuit Clerk’s office or register at vote.org.

Stop the Opt began putting information on their webpage and sending out messages to voters about the special election. Gipson said sometimes special elections don’t have the best turnout so they need people to get out and vote.

This would be the second time Lincoln County voters will have voted on medical marijuana in the county.

In November 2020, Mississippi voters overwhelmingly passed Initiative 65, agreeing to a state medical marijuana program. After an issue with the state Supreme Court that put everything on hold, the legislature crafted a bill and presented it to the governor, who signed the Mississippi Medical Cannabis Act into law this year.

Medical marijuana products would fall under the state’s existing 7 percent sales tax. Supply stores are already on the rise in the country – and one will open up in an former 40,000-square-foot restaurant supply warehouse near Jackson.

Cultivators will be able to sell their crop to the highest bidder. They just have to ensure they follow federal and state laws, which include growing into a contained area and ensuring all documentation of their production is up to date. For communities that opt out, patients can go elsewhere to purchase and can legally bring their products back into their opted-out community.

Dispensaries will pay taxes as well as make a profit. The law said that medical cannabis products will include cannabis extracts and flowers; edible and topical cannabis products such as oils, tinctures, suppositories and ointments. Mississippi Today reported that “large cultivators with more than 100,000 square feet of growing space will have to pay a $60,000 application fee and $150,000 annual license fee. Dispensary business owners … will have to pay $15,000 to apply for a license to sell and an annual fee of $25,000, regardless of the businesses’ size.”

Other businesses that could pop up include high-end security and transportation services and waste disposal companies. Each one brings new tax dollars to the people of the county that oversees these entities.