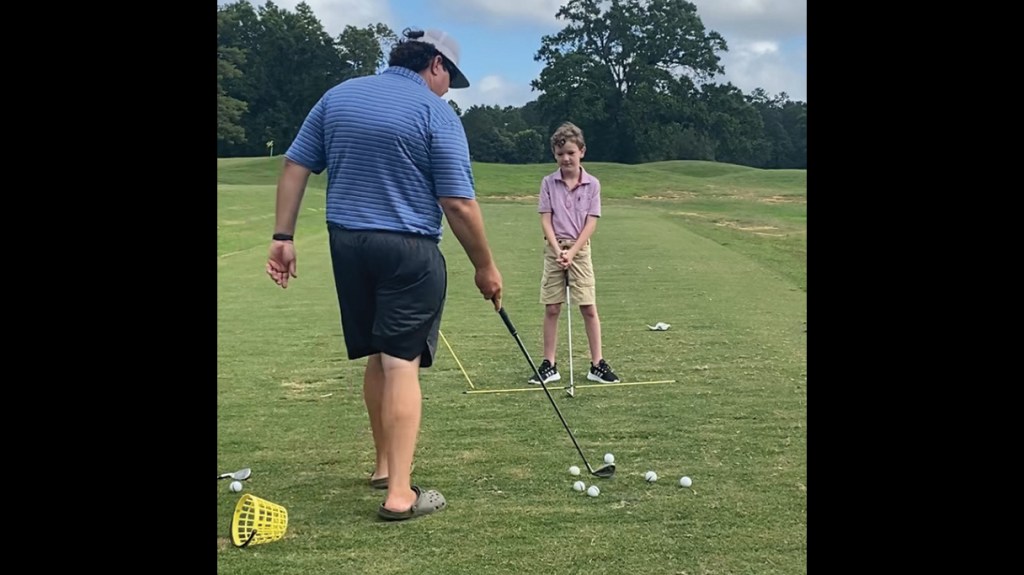 PHOTO BY HUNTER CLOUD Justin Spencer teaches a student in his Ole Brook Golf Academy. The academy is held at The Clubs at Ole Brook, but is independent of the club.

Justin Spencer has had a lifelong passion for sports and the outdoors. It started with football and baseball in the Loyd Star community and hunting and fishing with his father.

He would wade the Bayou Pierre in Copiah County to help his dad clean up the waterway as part of an adopt a creek program. In 1998, he graduated from Loyd Star and went to Copiah-Lincoln Community College to play football as a punter.

His time at Co-Lin is when he found a new passion, the game of golf. Tommy Watson was his roommate, he moved from Valdosta, Georgia, played football at Mississippi State and was drafted to the NFL. Watson loved golf and introduced Spencer to the game.

“He asked me if I wanted to go play. Growing up playing baseball I was decent at swinging,” Spencer said. “I got out there and I couldn’t hit a motionless ball where I wanted it to go and it drove me crazy. It was humbling, it’s the most humbling game.”

Spencer walked-on to Mississippi State’s team as a punter before graduating and going into the steel industry. This past year, he got out of selling steel and found a passion to teach golf through the Ole Brook Golf Academy.

In October, he obtained his Professional Golf Instruction certification and spent the winter watching youth camps studying how to teach the game. Kids are the future of golf and the Club at Ole Brook, he said.

Weekly, they have 10 to 12 kids show up although it has picked up lately and he expects to have 20 kids by the end of the month. When he started teaching in March, it was the first time he had ever been on the other side of the ball, the side where you are not in control.

“The speed of golf is different when you teach and the mindset is different. I’m not out here achieving a personal goal anymore. I’m showing kids that I have been blessed to see, learn and understand,” he said. “Teaching has humbled me as a person. I try to listen more than I talk. My favorite kids are the ones who haven’t been shown anything with golf because I can take the core and tweak it to where it is comfortable for them.”

A typical day in the academy starts with stretches, then he evaluates the kids to see where they are at. Some youth golfers have never touched a golf club in their life and others have played as long as they could walk. He evaluates how a golfer holds a club, how they address the ball and what kind of skill they have.

Golf is a game where the mechanics of a swing can be slightly different for each golfer. He said the academy starts off with five one hour sessions and the sixth session is a nine hole round so kids have something tangible and a number they can beat.

Each day represents a step in the game of golf that kids go through. First day is about grip, the second is about stance, the third is about posture, fourth is about rhythm and the fifth is about skill and the mental aspects of the game. He is able to be hands on with the golfers.

He hopes to continue teaching kids about the game of golf because it gave him so much. It has been a blessing and can provide opportunities to kids for college, he said.

Spencer has his mind set on the future with his golf academy. This weekend, golfers at Ole Brook will play in a club championship and determine the golfers competing in the Norwood Cup, an annual competition played between Ole Brook and Wolf Hollow.

“Ed Norwood was a mentor to me. He worked here and at Wolf Hollow and every year we play the Norwood Cup,” Spencer said. “I want us to have a junior Norwood cup. The Academy could allow us to do that.”