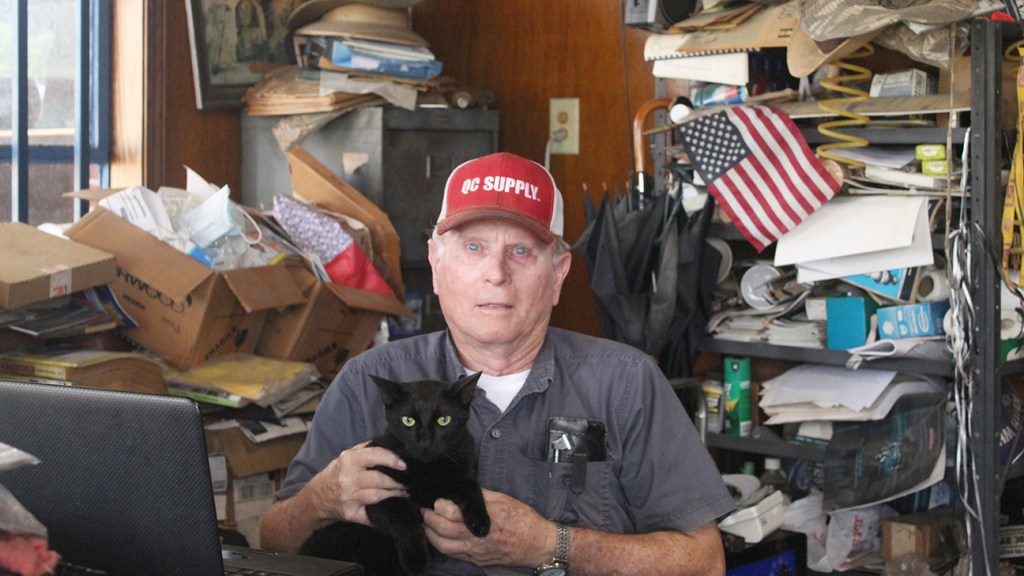 PHOTO BY HUNTER CLOUD Keith Reeves and his cat Slingshot sit in Reeves Service Station, which Reeves has operated — at first with his father — since 1953. The company was started by his father adn Skeet Lewis across the street from the current location in 1945.

Keith Reeves and his cat Slingshot sat in the cool shade of Reeves Service Station Friday morning. The station is still in operation and is on the corner of Enterprise and North Second Street close to where The Dart landed.

A native of Brookhaven, Reeves went to Brookhaven High School and studied accounting at Louisiana State University. He returned home in 1969 and came into the service station business with his father JP Reeves.

“We didn’t have any problems staying busy back then. We had a tremendous business back then,” Reeves said. “At the time this side of town was booming. There was a lot of activity in this part of town which has died off. It has changed tremendously. Just about everything has.”

A semi-truck lumbered its way up the street before making a left at the service station. Reeves said one thing hasn’t changed, there is still a lot of noise pollution.

Semi-retired, he doesn’t work as much as he once did but they still fix flat tires, sell new tires, change oil and sell gas. Currently, gas is $4 a gallon at his pumps.

In the station’s garage sits a black and white 1958 Chevy truck. It was bought in 1971 from Tom Cupit and still runs. Back then, they would haul people’s cars in if they didn’t start and would run the truck out to replace glass.

“The business has wound down. We used to do everything,” he said. “We will be 77 years old in November. We have outlived most of our old customers and commercial accounts … The old truck still runs but I just bring it around the shop when we need to service a vehicle there.”

In his free time, Reeves raises a herd of Shetland ponies. He and his father used to raise cattle and when he was a young man in 1956, his dad bought him a Shetland pony. They were all the rage back then and were a little more expensive.

His father decided to raise some Shetlands so they bought registered stock. Now he takes care of 34 Shetland ponies. The demand isn’t there for them like they used to be.

“Taking care of them isn’t as bad as the big horses and it is less expensive than fooling around with cattle,” he said.

Brookhaven is a Homeseekers Paradise and it has been a home to Reeves for a long time. Most of his friends still live in town and he has his contacts at LSU, so he has remained.

“I’m attached to home. We had the business here for years and years,” he said. “When you are making a good living it is hard to move somewhere else.”