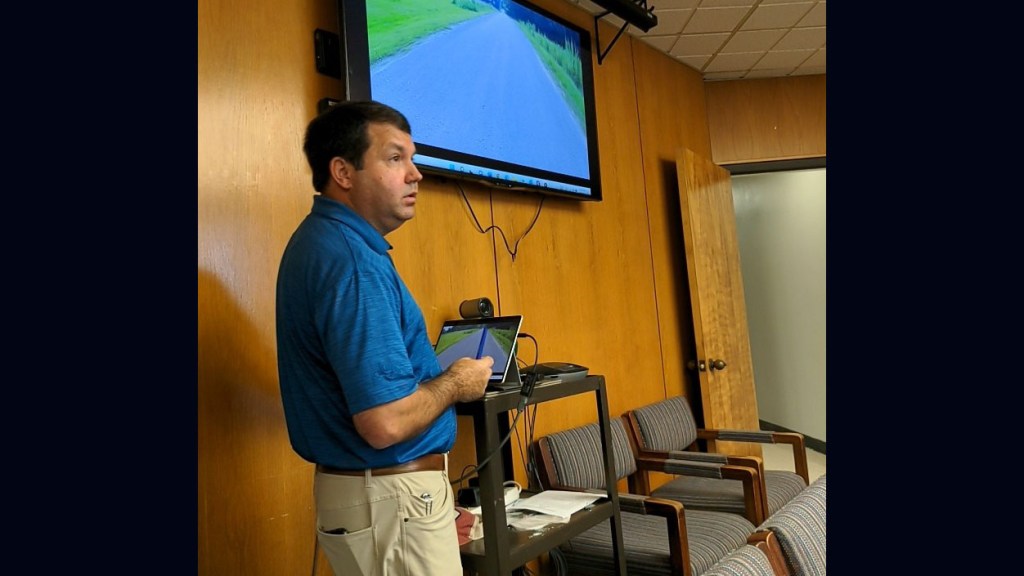 PHOTO BY ANGELA CUTRER / County engineer Ryan Holmes showed a recording to supervisors of how the county can keep track of before and after once a heavy hauling company uses county roads.

Residents in District 5 on St. Paul’s Road in northwest of Lincoln County want action taken on the “nasty, awful, pitiful” condition of their road.

“I work for AT&T, I pay taxes and I’m a law-abiding citizen and I shouldn’t have to creep on the road I live on in order to get home,” said resident Jillcollen Jefferson to supervisors Monday. “I am going to have to put my car in the shop to have the struts replaced. Why should I have to do that?

“Something has to be done. I’ve lived [at my current residence] for a year, and I used to live in Franklin County and I never had this kind of problem there. I’ve asked for this road to be fixed for a year now. I’m in Doug [Falvey]’s district and Doug is not doing his job.”

Jefferson added that the entire road is “patched with asphalt” and the rest is covered in rocks. “I’m not here to bash him or embarrass him, but I’m embarrassed my road looks the way it does,” she said with firmness. “He said he doesn’t have the funds to fix it, so he scraped dirt and made our road a mud hole. His job is to ensure our roads are safe and this road is not safe. We shouldn’t have to live like this.”

Falvey quietly let the woman speak before answering that yes, he agreed the road needs attention, but he’s tried figuring out how to fix it, considering the little funds he has available to do so.

“I don’t disagree with what you’re saying because the road is bad,” he said. “That’s why I turned part of it into gravel, because you can’t patch over a patch, so I put on gravel. I’ve talked with the engineer, and it’s going to cost in excess of $200,000 to fix it,” he said. “Let me get with some of the other supervisors and we can go look at that road and see if they have some suggestions. I’m willing to do that. We will go look at it and see what we can come up with …”

But he was unable to finish his statement as Jefferson jumped in with, “So, I’ll be back in a year’s time again.”

County Attorney Will Allen said they could have the engineer look at it and the road is on their radar.

Holmes showed a recording to supervisors of how the county can keep track of before and after once a heavy hauling company uses county roads. If there is any damage to the roads once a hauling company has used it, the video of the ‘before” can help the county require repairs on those roads from the company.

As a way to explain how many residents are complaining about their roads, District 3’s Nolan Williamson said he has 25 roads on his list for the American Rescue Plan Act of 2021 funds, yet he can only do two because of how much inflation has eaten away the power of the dollar.

Falvey replied, “Are you saying I don’t return your calls?”

“No, you did, but it was several hours later. That let’s me know my call wasn’t important. I’m done talking. Thank y’all for your time,” she said as she walked away.