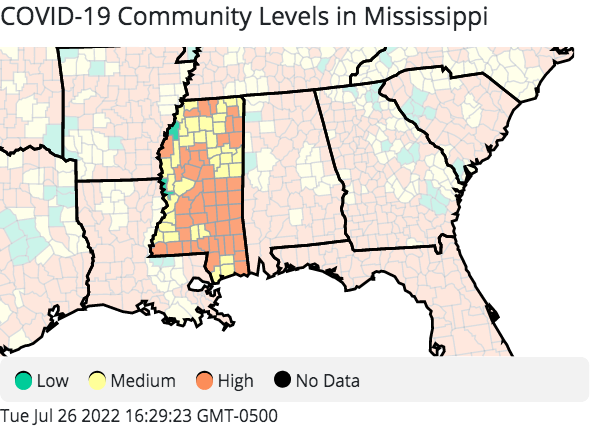 In the previous 24 hours, 145 new cases of COVID-19 have been reported in Lincoln County.

Six new deaths were reported Tuesday across the state, having occurred July 23-25 — two in Harrison County; and one each in Attala, Hinds, Pearl River and Rankin County. Mississippi State Department of Health has recorded 12,609 deaths so far.

Total new cases reported across Mississippi Tuesday were 1,094, bringing the state total to 870,560. In the previous seven days, more than 10,110 cases and 31 deaths have been reported. Approximately 25 percent of people taking tests have received positive results. More than 60 people per day have been hospitalized over that same one-week period.

The community transmission level for Lincoln County remains high. MSDH recommends wearing a mask indoors in public; staying up-to-date with vaccines; and getting tested if you have symptoms. Additional precautions may be needed for people at high risk for severe illness.