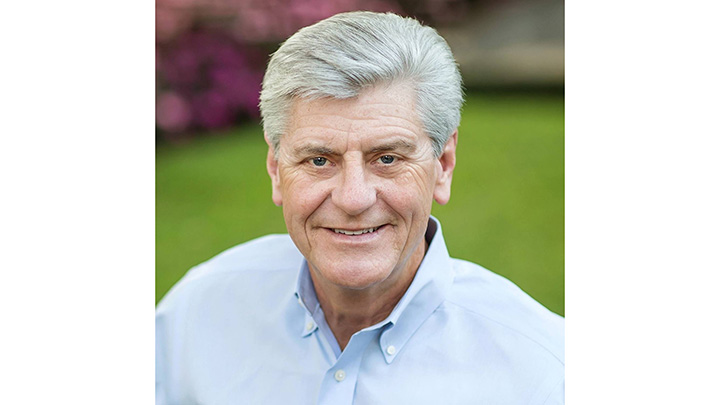 Phil Bryant served as the 64th Governor of Mississippi.

Nancy New’s attorney has filed a subpoena directly on former Gov. Phil Bryant for documents related to the use of federal welfare funds to build a volleyball stadium at his alma mater, University of Southern Mississippi — information the state has appeared intent on concealing.

“We have no confidence that the state will follow through with its subpoena or pursue the evidence wherever it leads,” said Gerry Bufkin, the attorney for New and the nonprofit Mississippi Community Education Center. “We’re going to find the truth, even if we have to drag it kicking and screaming into the light.”

Bufkin’s subpoena asks Bryant to produce any of his communication surrounding the USM volleyball stadium and efforts to fund it. This marks the first known time the former governor, who oversaw the welfare agency while the misspending occurred, has been compelled to provide documents related to his involvement in the scheme.

The attorney also filed subpoenas on the USM Athletic Foundation, and on the Attorney General’s Office and Institutes of Higher Learning — two state agencies that approved the project. These three entities, as well as a spokesperson for Bryant, did not return requests for comment to Mississippi Today on Wednesday morning.

The Monday subpoena comes just days after Mississippi Department of Human Services fired the private attorney representing the agency in a massive civil suit that attempts to claw back $24 million in misspent grant funds from 38 individuals or companies. The suit is heavily based on audits conducted by State Auditor Shad White, a Bryant appointee, and private forensic auditors the welfare agency hired in 2020.

The agency said it removed the attorney on the case, former U.S. Attorney Brad Pigott, because Pigott had recently filed his own subpoena on the University of Southern Mississippi Athletic Foundation. Pigott was poking into why and how New, former First Lady Deborah Bryant’s close friend, paid $5 million in welfare funds to satisfy Brett Favre’s desires to see a new stadium on USM’s campus, where his daughter played volleyball.

“Although USM Athletic Foundation is not yet a party in this case, Brad Pigott issued an extensive subpoena to that entity without any prior discussion of the matter with MDHS,” current welfare director Bob Anderson said in a statement Saturday.

MDHS originally told the public that it would include the volleyball stadium in its civil suit, but Pigott told Mississippi Today the governor’s office prohibited him from doing so.

“All I did, and I believe all that caused me to be terminated from representing the department or having anything to do with the litigation, was to try to get the truth about all of that,” Pigott told Mississippi Today hours after his firing Friday. “People are going to go to jail over this, at least the state should be willing to find out the truth of what happened.”

The federal government prohibits states from spending funds from the federal Temporary Assistance for Needy Families block grant on brick and mortar, such as building an athletic facility. To get around this prohibition, the parties crafted a $5 million lease agreement, pretending that the New nonprofit would use the athletic facilities on campus to provide services to needy families. The athletic foundation would use the money to build the volleyball stadium, which it called the Wellness Center.

The volleyball facility represents the single largest known purchase in the welfare scandal, and with approved IHL meeting minutes revealing the nature of the project and the source of the funds, it’s also the scheme with the potential to ensnare the widest group of powerful people.

A text Favre sent to his business partner in late 2018, obtained by Mississippi Today, illustrates the attitude surrounding the payment: “(Nancy New) has strong connections and gave me 5 million for Vball facility via grant money.”

Favre was the inspiration behind at least three major expenditures in the scandal: the volleyball facility, $2.1 million in payments to a pharmaceutical startup, and a $1.1 contract directly with Favre to promote services for needy families — all of which now have some alleged proximity to former Gov. Bryant.

Nancy New, who has pleaded guilty to state charges of fraud, bribery and racketeering in the overall welfare scandal, has argued in responses to the state’s complaint that she has taken responsibility for her role in the scheme, but that she was acting on the direction of others who have been shielded from consequences.

For example, Bryant was the one who directed Nancy New to give Brett Favre the $1.1 million contract, she alleged in a recent filing. A spokesperson for Bryant denied this.

“Nancy and Zach have been cast as the ring leaders in this spending circus since the beginning. The auditor’s office focused on them to the exclusion of others and now MDHS has fired Brad Pigott to ensure that the cast of characters remains small,” Bufkin said. “This certainly appears to be a patent attempt by the state to obfuscate truth and to protect itself and its political allies.”