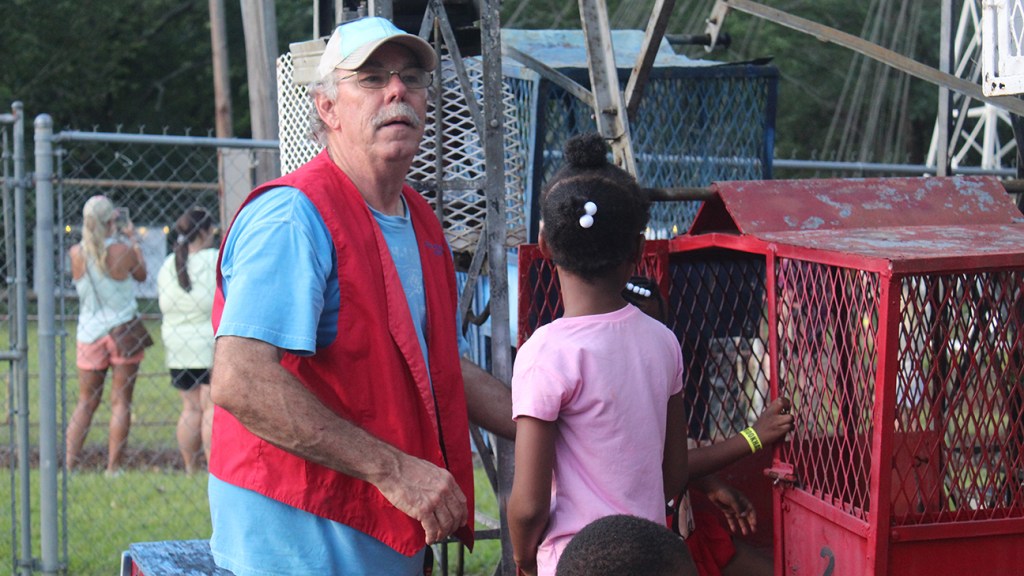 PHOTO BY HUNTER CLOUD Doyle Rushing helps a child get in the mini ferris wheel at the Exchange Club Fair. Rushing has been a member of the exchange club since 1989. He said the club has been a family to him.

A jovial man welcomed kids to the mini Ferris wheel at the Exchange Club Fair close to where The Dart landed Thursday evening. Doyle Rushing has lived in Lincoln County for the majority of his life and has found family in the Exchange Club.

He first joined the club in 1989 and was living in Jackson at the time. Rushing had first known about the club from the fair they put on every single year. Since then he has learned a lot about the history of the fair.

The train tracks which circle the fair grounds were donated to the club by a man. He said there was a slight problem with the tracks, they were straight. Exchange Club members took a barrel and built a fire in it to make the tracks hot enough, then they took a car and made them curve and they have been there ever since.

“I used to look up at the old veterans here and listen to their stories. I wanted to be like that,” Rushing said. “Those guys would work on the fair from 10 a.m. to 10 p.m. They made all of this happen and were truly the greatest generation. They were my heroes.”

His heroes had first formed Brookhaven’s chapter of the club after returning home from World War 2. Their mission was to do something positive for the community. He said the charter members were in the club for about 55 years until they died.

Growing up, he knew of the Exchange Club as just a group of guys who put on a fair. It was not until he was an adult that he would become involved with the club. A co-worker invited him to visit a meeting after work. He said he knew a few of the men.

One of the dearest members to him was Carl Dyss.

“He was another dad to me. He was here and I thought I would join,” Rushing said. “I have met some of the greatest men I have ever known. I just wish I had the time to put in here that some of these guys do. This club has been like family to me the past 40 years.”

Currently, he is busy working at Co-Lin and trying to get a house remodeled. His nights over the next two weekends will be spent at the Exchange Club Fair as he comforts kids and tries to get them to enjoy the rides.

A young man and his son stopped to ride the mini Ferris wheel. Rushing said he remembers seeing the man at the fair as a child. People come in waves with kids to get on the Ferris wheel and people who know him stop to say hello.

At Co-Lin, there have been a few times where students recognized him as one of the Exchange Club members because of the fair.

“It amazes me how they know who I am,” Rushing said. “This fair is an extension of my family. This is small town Mississippi at its greatest.”

He is humble about his involvement with the club. His goal upon retirement is to invest more time into the fair and to go to natural disasters in the southeast to lend a helping hand. Some of the members spend days and a lot of man hours getting the fairground ready for the fall.

“They are some of the unsung heroes,” he said. “They try to make this community better.”