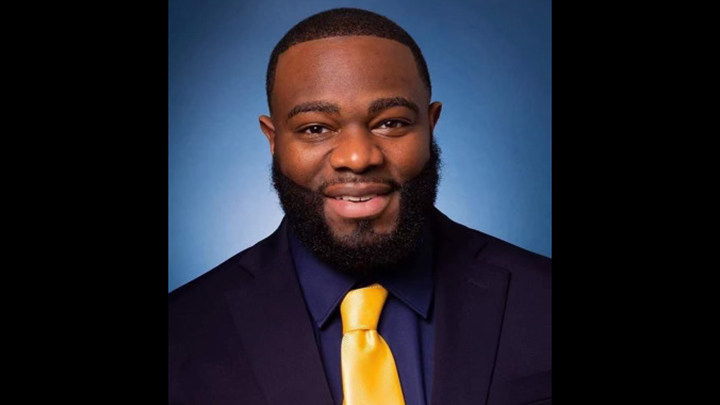 Brookhaven resident Reggie Cain carried tree limbs across South Cleveland Street to a pile close to where The Dart landed Friday morning. He was getting ready for his son’s birthday party this weekend and making room for a party inflatable.

Cain is a native of Meadville and graduated from Franklin County High School where he played football and attended Alcorn State University. In Lorman, he studied Criminal Justice and earned his bachelor’s degree before joining the Brookhaven Police Department five years ago. He moved to Brookhaven thanks to police chief Kenneth Collins who gave him an opportunity.

“I went to the police academy and since then I have tried to make Brookhaven my home,” Cain said. “During college I made the decision I knew I wanted to be a coach or in law enforcement. I wanted to help people. With coaching or police work I could be a helping hand in the community.”

A police officer, Cain volunteers his time as a coach with a semi-pro team called the Mississippi Lions. He had played for the Lions during college because he wanted to continue playing football but was not big enough to play at Alcorn.

His playing career came to an end when he joined the police force because he did not want to get injured, he said. Now, he helps coach the team as they practice at Lipsey Middle School and they play at a field in McComb.

The Lions wear full pads and are made up of players who didn’t get a chance to play college football or pro football and players who were injured and lost scholarships as players. It gives them a chance to get film and experience with the hopes of playing football at a higher level.

“We give them a second chance,” he said.

As a kid, he learned how to cook in the kitchen but it wasn’t until he got to college that he found a love for cooking. He worked at Ruby Tuesday in Natchez during college and became a manager in the kitchen.

Now, he spends his free time entering cook offs and grilling at home. One day he hopes to open his own restaurant, perhaps a barbecue joint.

“I have the best ribs and I love to enter them in cookoffs,” he said. “I use seasonings others do not use. I try to season my ribs to perfection so people don’t have to use sauce. The seasoning has some heat but it is mainly garlic and herbs.”

Another dream of Cain’s is to become the police chief in Brookhaven one day. He hopes to make Brookhaven his home and he has found a quiet place on South Cleveland Street. The community is the best part of his job and home.

“In the community people know your heart. They will reach out to you and you can build a relationship and gain the trust of the community,” Cain said. “The street has been quiet since I have been here and all my neighbors are welcoming. They love to see me here. Police cars in the yard deter crime.”