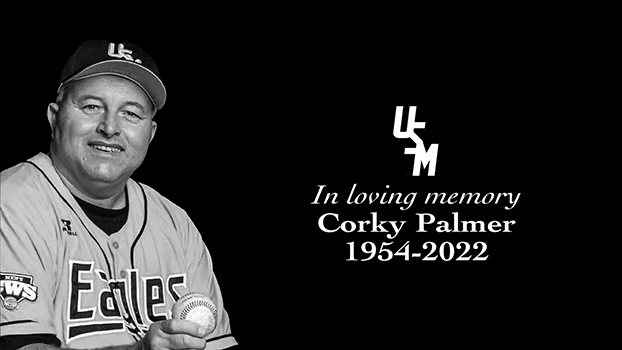 Palmer, a legend in the history of Golden Eagle baseball, started his career as a player from 1974-77, and later returned as an assistant coach for the 1985 and 1986 season, before ending his baseball career as the school’s head coach for 12 years from 1998-2009.

The Hattiesburg, Miss., native posted a career .274 batting average as the team’s starting catcher as he lettered four years under coach Pete Taylor and was squad’s captain his senior campaign in 1977.

After his graduation from Southern Miss, Palmer served as an assistant coach at Newton (Miss.) High School, before capturing three Little 10 Conference titles in three seasons as head coach at Lee High School in Columbus, Miss. His team also shared a district title in 1980.

He then moved on to become head coach at Columbia (Miss.) High School for two seasons and captured the 1983 South State championship. His time as a high school head coach produced a record of 102-52.

After Columbia, Palmer returned to his alma mater for his two-year tenure as an assistant coach. Palmer oversaw the Golden Eagle pitching staff that posted a 59-71 record over those two seasons and included an All-Metro Conference pitcher and one all-Metro Tournament selection. The 1986 squad finished 31-30, which began a string of 36 winning seasons over the next 37 campaigns.

Palmer then directed the baseball program at Meridian (Miss.) Community College from 1987 until 1996, compiling a 409-160 record. Six of his teams captured 40 or more victories and his squads reached the Junior College World Series three times. His championship total also included five Miss-Lou tiles and three Region 23 tournament appearances. The squad finished national runner-up in 1996 and earned a third-place showing in 1994. He won Region 23 Coach of the Year four times.

Palmer then returned to Southern Miss as an assistant coach for a season in 1997, before taking over the Golden Eagle program the following year and amassing a 458-281 record and his win total ranks third in school history. In his final season, he took Southern Miss to its only College World Series berth in 2009. He led the program to eight of its 18 NCAA Tournament appearances, including seven-in-a-row at one point and his teams capture 30 or more wins 11 times and had six 40-win seasons.

The 2003 Conference USA Coach of the Year produced 11 All-Americans, 10 Freshman All-Americans and four Academic All-Americans. In addition, 19 players were drafted and played professional baseball. He also coached four C-USA Scholar-Athletes of the Year.

Palmer is one of only four Southern Miss baseball coaches to hold the spot since the start of the 1959 campaign and include Taylor (1959-1983), Hill Denson (1984-1997), Palmer and Scott Berry (2010-present).
During his first season as head coach at Southern Miss, Palmer earned induction in the athletic department’s M-Club Hall of Fame and was later a member of the 2011 Mississippi Sports Hall of Fame class.