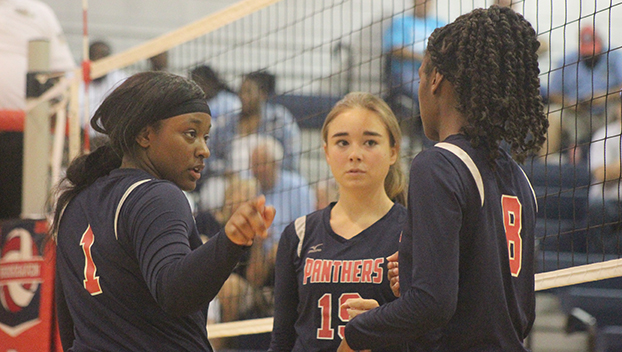 BaBailee Gamble, left, turns to talk to Kaniya McDaniel and Olivia Smith during Brookhaven's match against Franklin County. Just like her coach, she can see how the Panthers could be better and has a belief they will get there. (Hunter Cloud | The Daily Leader)

Ole Brook Volleyball was two points away from winning its first set of the season. Mental errors and mistakes swung the sets and match into Franklin County’s favor as the Bulldogs won 25-23, 25-16 and 25-22 Thursday evening.

Head Coach Charlton Grey was fired up from the get go after his JV team played a solid match against Franklin County. The Junior Panthers took Franklin County to a third set before losing. Addison Foster and Micah Walker shown in the JV game, he said.

His girls came so close to a win in the first set. He said it on the bench as he watched a 23-18 lead slip away. Our team had fight tonight, he said.

“It was just a rough game for us,” he said. “It was about the same against West Marion. We are in the game, and we keep making costly mistakes. I get a lot of joy from coaching. I love this game, and these girls. I am a competitor. I want them to play to the best of their ability.We are so close to being where we are supposed to be.”

Sophomore Bailee Gamble said the match was a roller coaster ride of emotions as they went up and down. The panthers had their ups and would have their downs.

She said the team felt pressure out on the court because they knew how well they could play.

“I think in the next game, we will do better,” Gamble said. “We know we could be better. We could have won that game. We expect a lot from ourselves. I feel like we have more confidence than last season. We have evolved and gotten better.”

Brookhaven’s serves, receiving and communication has improved from last year, she said. They could be better in those areas with a few missed serves and moments where Grey had to urge them to talk.

Gamble is in her second season with the team. She joined them last year in addition to playing basketball for Brookhaven.

“I wanted to be a part of something which will evolve over the years,” she said. “I just enjoy being out there and being with the girls having fun.”

She said the team drooped a little in the locker room after the match. She hopes they turn things around in their next match at Terry High School on August 16.

“We feel the energy on the court, but after one little mistake we get down. We have to stop that,” she said. “We knew we could have done better.”

Grey said they would be ready to handle the moment next time. One of the reasons the girls had some trouble letting the sets slip away was because of the crowd in the stands.

Hundreds of Brookhaven fans filled the stands to watch the game. Grey said he finds joy in the fact there are fans there to watch them play.

“I told them they come here to see them perform,” he said. “I know you can do it is up to you. This is something you have to want.”