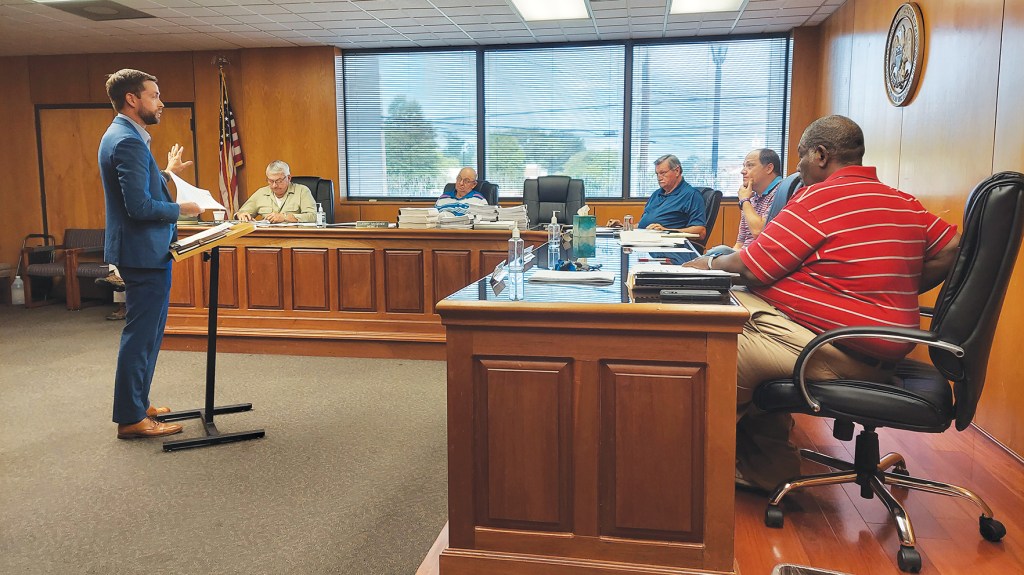 PHOTO BY ANGELA CUTRER Consultant Parker Berry speaks to the Lincoln County Board of Supervisors about finalizing new redistricting maps.

The Lincoln County Board of Supervisors heard from consultant Parker Berry about the final steps of the county’s redistricting process, but Berry’s report didn’t phase District 1’s Jerry Wilson, who said unless he got more mileage, he wasn’t voting on anything to do with redistricting.

“On this agenda, it says ‘meet to finalize redistricting,” Wilson said. “I had a doctor’s appointment to go to; I was thinking all this was done the last time [when I was absent]. You all told me it was a done deal, but I’m looking at this [agenda] ‘to finalize’ it, and it’s a different story.

“I’ve had things come about and got with some people because of my rural mileage. I know [a vote] might be 4 to 1, but I’m [going to] kick it out so I can get some road mileage to get what I need for my district and make sure that we have the money to do what District 1 needs done.”

District 3’s Nolan Williamson then expressed to Wilson how disappointed he himself was with the amount of money he had to work with, saying two roads that must be reworked would cost more than $1 million for each road. But there was nothing anyone could do about it.

“Right now, I don’t have nothing,” Wilson answered. “The total money was supposed to be more, but it’s $600,000 and [the other supervisors have a million]. So, whatever I have to do, I have to do it. At least I tried.

“[The last supervisor] had 16 percent [of the total budget], but I only have 10 percent. Let’s bring it back up to 16 percent or a little bit better than that. Give me a little bit road mileage or let’s change it. Give me District 3 and let’s see what we can do.”

However, Berry said to the board that they’ve had many meetings to discuss the redistricting maps, aluding to the fact that discussion pertaining to changing the districts would have been more appropriate then. “We have had meetings in December [2021] and in May when we adopted criteria to use for redistricting,” Berry said. “We had a number of meetings in March and in April and then a public meeting May 6.” He said most of the changes in rural areas remains unchanged; almost all the changes are in and around the are of the city of Brookhaven.

He said the next step would be to move forward with drawing the legal maps and after those are adopted, to updating voter rolls so that through the fall, voters could check to see their new precincts, if applicable. That would ensure plenty of time before Jan. 1, when qualifying for public office would be on track for voting time.

Road mileage, Berry added, is not part of the redistricting. “That’s according to y’all’s policies,” he explained. “We don’t have anything to do with that.”

“We have to get more money,” Wilson said. “I’m not going to vote for anything.”

The board voted 3-1 to approve moving forward, with Wilson voting no and District 4’s Eddie Brown absent.

After the vote, Wilson said “Give me more money and more road mileage; we can do this” toward the other supervisors. Turning to looking at a news representative, Wilson said, “Are you going to put that in the paper? I want with [the last supervisor] had.”

Williamson said that it was the change from the unit to beat system that changed the area drawings of districts. “I need country mileage,” Wilson answered back. “I need it back to 16 percent. We were able to maintain and do what we need to do then. Now, y’all get everything. 10 percent? 10 percent? Nah, give me 16 percent. Give me 20 percent.”

Williamson answered “Jerry, you got the same amount of money to spend per mile that I have.”

“No, we don’t have the same amount of money,” Wilson countered. The board’s president, District 5’s Doug Falvey, said “per mile, you do. Districts are broken up by miles.”

“I don’t want to disrespect anybody, but 10 percent is not enough,” Wilson said again.

“None of us has enough,” Falvey said.

Wilson seemed disappointed with that response: “That’s what I’m talking about,” he said with a shake of his head.