Lincoln County Administrator: Spending ‘a little high,’ but receipts are ahead, too 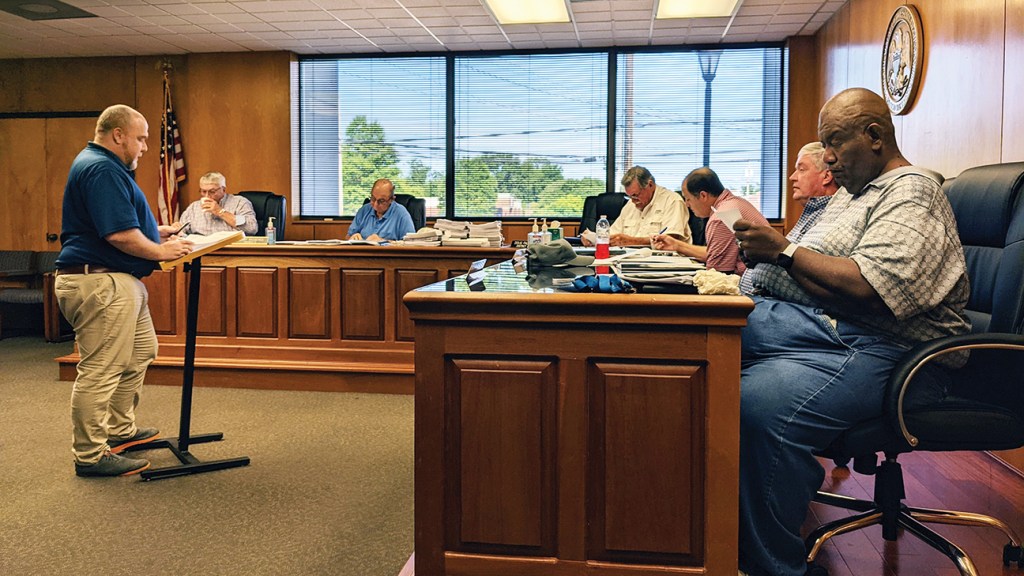 PHOTO BY ANGELA CUTRER County Administrator Daniel Calcote speaks to the Lincoln County Board of Supervisors about July financials.

On Monday, the Lincoln County Board of Supervisors heard from County Administrator Daniel Calcote on how the county stands so far on spending.

“It’s still a little high, thanks to different expenditures we’ve faced,” he told the board concerning July’s financial report. “[However,] you can see our receipts are ahead of where we expected as well.”

The county is 83.33 percent of the way through its fiscal year. It has received 99.6 percent of its budgeted receipts so far.

• The Board of Supervisors is at 108.3 percent of annual budgeted expenditures due to liability and high property insurance costs being more than budgeted.

• The tax collector is at 96.4 percent of annual budgeted expenditures due mainly to tax collector bonuses for city collections not included in the budget, though this overage is reimbursed by the city.

• The Building and Grounds Department is at 94.5 percent due to several air conditioning repair expenses.

• The Sheriff’s Department is at 93.3 percent of annual budgeted expenditures due to higher costs of fuel and other supplies.

• The jail is at 96.7 percent of budgeted expenditures due to high food prices for prisoners and high medical costs.

• The Civic Center is at 109.8 percent of annual budgeted expenditures due to many expenses March through May for baseball season and from construction of a water well that is partially funded from the Civic Center Foundation.

• District 2 Road Maintenance is at 128.3 percent due to emergency bridge repairs, payment of $112,000 to S&S Dragline in December, $40,000 of culverts purchased in April, payments for a countywide paving project in May and purchase of a new tractor.

• District 3 Road Maintenance is at 140.2 percent due to $222,156 invoice payments in December to Dickerson & Bowen and $263,289.13 to T.L. Wallace, as well as expenses for Hurricane Ida cleanup and payment on the July countywide paving project.

• District 1 Bridge Project is at 151 percent of budgeted expenditures due to higher-than-expected payroll costs as well as other expenses; however, monies will be transferred from the road to the bridge account as should have been done initially, Calcote said, making the actual percentage lower.