Cougars weather second half flurry of attacks from St. Augustine 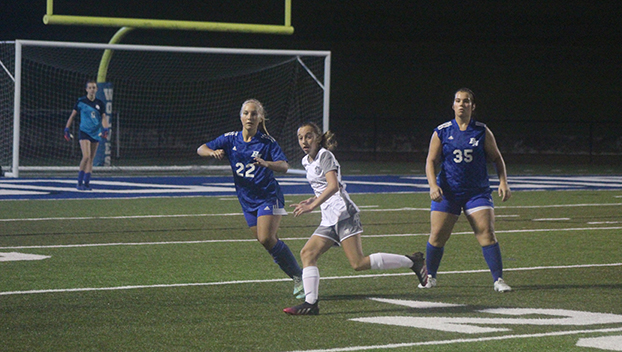 WESSON — Brookhaven Academy weathered a flurry of attacks from St. Augustine in the second half to see out a 2-0 victory Monday night. Ava Calcote and Mattie Claire Smith anchored the defensive back line as center backs.

BA opened the night with an immediate attack but took all 40 minutes of the first half to score a goal. Head Coach Alex Brown thought it was a great team win.

“Our attackers did a great job of getting in behind the St. Augustine defense. The midfield play may have been the best we have had this year,” he said. “They did a great job winning the ball back and helping us to be intentional with our attack. The defending and goaltending were outstanding as usual.”

Brown had his team in a high press on the St. Augustine final third. Katie LeBlanc, Reagan Fortenberry, and Karen Hernandez created opportunities through sustained pressure.

This pressure led to the opening goal when St. Augustine’s keeper brought Mallory Martin down in the box. Martin stepped up to the spot and fired it low to the left post to convert before the halftime whistle. St. Augustine came out in the second half and turned their attacking play on.

“They were mad about some things and some of the calls,” Smith said. “It was frantic, and people were going after the goal. You have to let them know who you have.”

She said the wet turf made the game flow differently, and the ball rolled faster. BA’s midfield stepped up its play on the night and helped create a scoring chance in the second half by flipping the field through passing play.

For about five minutes, BA attacked the St. Augustine final third creating some corners and deep throws. Fortenberry won a penalty kick when she was kicked in the stomach. Martin fired the penalty shot off of the left post and into the back of the net.

St. Augustine was frustrated by the call and went to attack the goal with relentless aggression.

“It was stressful but we had a lot of help with people dropping back,” Calcote said. “We did good and the outside backs helped a lot. We have gotten better as the season has gone on with communicating. The second goal helped take some of the pressure off of us.”

She said her goal this year was to earn more clean sheets as a defense. Brown said the Cougars have outscored their opponents 19-4 in eight matches played and kept five clean sheets.

Brookhaven Academy returns to action tomorrow at Co-Lin when they play host to Laurel.