The Dart — It’s been a rough journey: Man is 380 miles from home 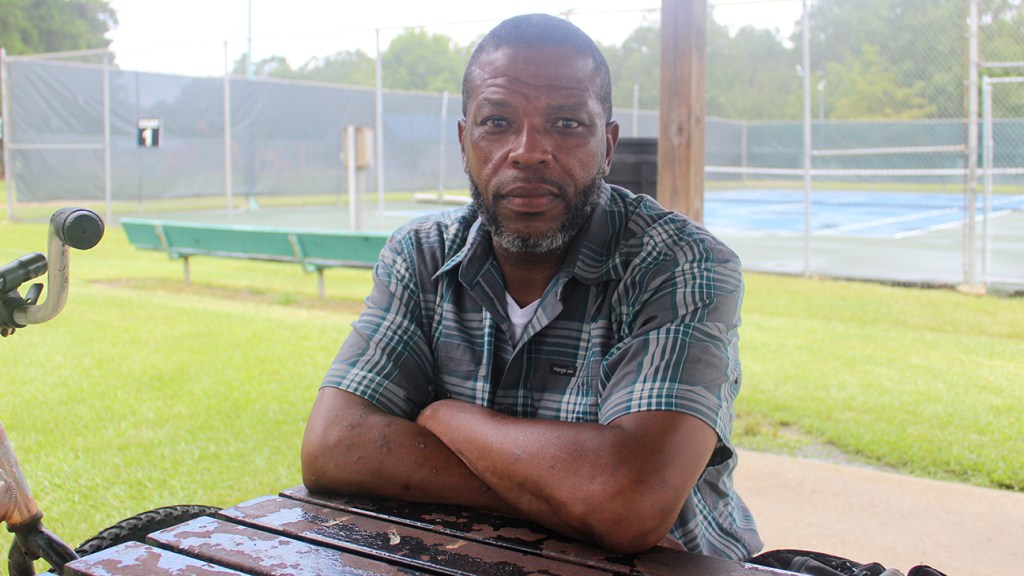 PHOTO BY HUNTER CLOUD Robert Brooks is a long way from his home and family in Columbus, Georgia. It has been a rough journey for him to get to Brookhaven.

Robert Brooks sat underneath a pavilion by the tennis courts at Brookhaven City Park close to where The Dart landed Friday morning. A silver streak of hair runs down the middle of his head and face forged out of hardship.

He is about 380 miles away from his home. Originally from Fort Benning, Georgia and Columbus, Georgia, Brooks said he was born and raised there. He left Columbus and took a job in Atlanta.

He said he had a hard life growing up. Out of five of his siblings, he is the only one still living. They each had different health problems and he was the healthiest one. When his mom died in 1998, he had to take care of his siblings.

On his right forearm is a tattoo in honor of his siblings. He looked at it as he spoke about his baby sister and how much he cared for her. She had to have both of her legs amputated and was worried about what would happen to her.

“I told her I’ll be your legs. I will carry you wherever you need to go,” Brooks said.

In 2008, he lost his dad while he was staying in Mobile. They stayed in touch for years over the phone but they had stopped talking for a while. He called his dad up out of the blue and one of his nieces answered the phone with the tragic news.

“She told me he had gone. I said ‘Gone where?’” he said. “I think my major problem is not seeing him and I was not able to go to the funeral.”

His time in Atlanta was spent working quality assurance for a salad company which would ship to grocery stores. Then his grandma had gotten sick and asked him to come to Mobile to take care of her.

“My uncle was on drugs real bad and wasn’t looking out for her,” Brooks said. “I stayed in Mobile for six months taking care of her. She got back to working and I left Mobile to come to Brookhaven. I had met a girl online. I moved here because my grandma was doing well and I haven’t been back.”

The relationship in Brookhaven did not work out and he was forced onto the streets. Sometimes he gets stuck in a spot and does not know what to do. He is in a position like that in Brookhaven right now. The man needs work but is not sure if he could get to work. At the moment he is borrowing a bicycle from someone he knows.

He asked one of the officers at the Brookhaven Police Department to be his mentor. Neither one has had the time to meet but the officer sees Brooks, they stop and talk.

“He told me to keep my head up. He always asks if I need anything,” Brooks said.

The toughest thing for him is the disconnect from his family and memories. Multiple times he said his phone was stolen, or someone would change the passwords to his Google account. Photos of family members were on there and he has no way to access them.

Brooks has three kids, each of them are 10 years apart. A phone call was one of the ways he could stay in touch with them.

Right now, he is staying on the walking track walking and talking with the Lord all the time, he said. His children keep him going and so does the spirit of the Lord.

“I miss home and I want to go home to visit but I don’t have the money. I know I have to go back. I know I am needed in Columbus,” he said. “I want to go where I’m needed.”

One of his best friends lives in Columbus. He remembers when his sister was in the hospital and he saw his friend there. The man’s wife was about to give birth to a son but something had happened and the baby boy had died.

Brooks was asked to go to the room and talk to the man’s wife because she wouldn’t let go of him.

“I told her she was going to have to let him go. I told her the next one would be gifted,” Brooks said. “Eight months later I was talking to someone at the hospital about church. She tapped me on the shoulders and said, ‘Look I’m eight months pregnant.’”

They are still in Columbus, Georgia, he said.

He loves Brookhaven but is still trying to understand what it means. He said he is perplexed about the sign in downtown Brookhaven which says “Homeseekers Paradise.” His home is in Columbus, Georgia.

“Columbus was a home seekers paradise to me,” he said. “I have a lot of friends and family back home.”