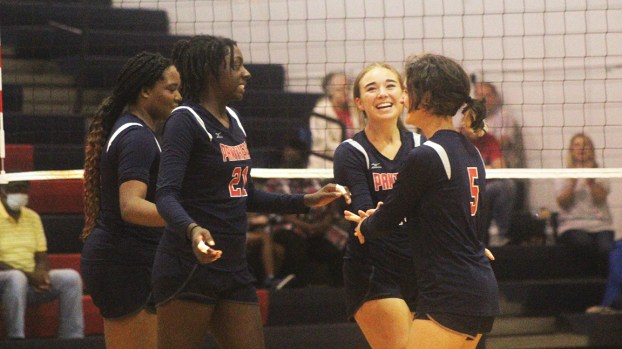 PHOTO BY HUNTER CLOUD Ole Brook’s volleyball players celebrate a point and laugh during a set against Salem Thursday night. The Panthers were on a two match winning streak before a defeat to Salem. They are headed in the right direction, Salem’s coach told Panther head coach Charlton Grey after the game. 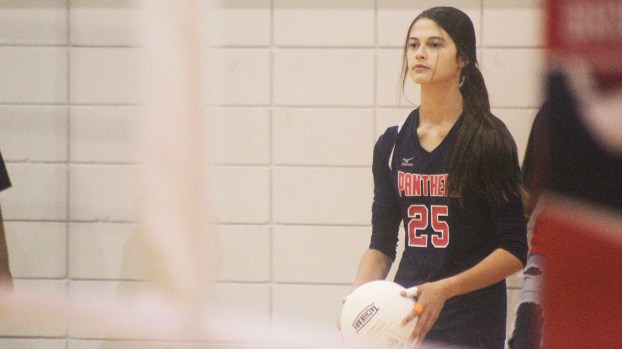 PHOTO BY HUNTER CLOUD Addison Foster made an impact for the Panthers last night as a consistent server. She helped them win the first set in a match against Salem but the team dropped the next three sets to lose 1-3.

Brookhaven took the first set, and the girls celebrated. Addison Foster had stepped up to the task and delivered a series of precise serves to help her team win.

She is a tennis player at Brookhaven and feels her experience on the tennis courts translate to volleyball. Her serving motion is fluid and helped the team keep a steady rhythm to get off to a good start.

Salem found a grove. They recovered with the second set winning 12-25 as Brookhaven fell into a slump. Panthers dropped points from missed serves, miscommunication and misjudgment of the ball.

Grey said he has explained to them the difference in depth perception for volleyball and basketball. In basketball, a player has to go to the ball. In volleyball you can let the ball come to you, which is why you can hear him yelling “don’t jump, don’t run to it.”

Those same mistakes would cost them the third and fourth set 21-25 and 13-25. It was a big difference from their win over Terry on Monday.

“We had some energy today, and it was like this time they let the mistakes bring them down. The other day they could bounce back, and the fire was there,” he said. “It is like they got comfortable, and I told them there is a difference between being relaxed and being comfortable.”

Despite the defeat, he is still proud of the way his team continues to play. They have set goals and are trying to accomplish them.

Salem’s head coach Bryan Martin spoke to Grey after the game as the team’s shook hands. Martin was the coach who gave Grey pointers on how to coach volleyball when he first started.

“He told me I have them in the right direction,” he said.

Foster said it is frustrating to lose sets like they did, but she knows it is a long season. They have more games left to play.

Brookhaven will need to stay together and be focused when they play at Lawrence County on Monday.

“I have a lot of friends on this team,” Foster said. “I feel like when we work together, it is the best game. That is what I like about it.”