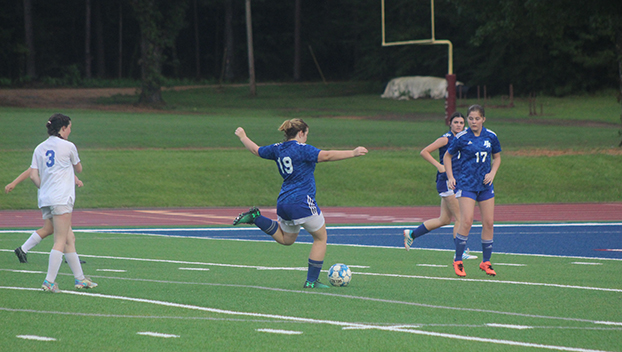 Lola Strickland fires a shot at goal which got past the AC keeper. It was her first goal and the seventh goal of a BA district win. The Cougars recorded their sixth shutout 7-0 Monday night. (Hunter Cloud | The Daily Leader)

SUMMIT — Adams County Christian School endured a downpour and an onslaught of goals in a 7-0 loss to Brookhaven Academy Monday afternoon. The game was at Southwest Community College in Summit as heavy rains, which dumped nine inches on Brookhaven, have left soggy field conditions.

AC senior Claire Williams said it was the first time in a week they could get on a soccer field. Rain canceled practice last week, and they could not practice indoors due to scheduling issues.

BA eighth grader Lola Strickland scored the seventh goal in the dying minutes of the game but it was one she could celebrate. Her second shot on target rolled past the keeper into the bottom corner and was her first goal.

“It is the first goal I have ever scored. I have played defense the last six years,” she said. “I thought my teammates would shoot outside the box, but they passed me the ball and told me to shoot. I just kicked it.”

Her teammate Reagan Fortenberry secured a hattrick while Malory Martin, Kate LeBlanc and Karen Hernandez each recorded a goal. Hernandez recorded an assist, as did Fortenberry and Martin. Eighth grader Livi Fortenberry did her part with two assists on the night.

AC’s missed time on the pitch showed in their play as they were shutout in the district match against Brookhaven Academy. The Cougars have kept six clean sheets this season and outscored opponents 26-4 in nine games. They are playing well to start the season.

“Every one here is a team player,” Strickland said. “We have good sportsmanship and work hard. I hope we can get to a state championship, but it will take a lot of practice.”

Her soccer career started six years ago because it looked like a fun activity. She has stuck with the game because it is fun to play. It is also fun to meet different people and play different positions, she said.

Her goal for the season is to get better and possible start a game or more.  BA Head Coach Alex Brown said she has stepped up.

“She has gotten called up from JV and played well the last six or eight games,” he said. “She was rewarded for her efforts today.”