The Dart: Couple celebrate 25 years Monday, 20 of them in Brookhaven 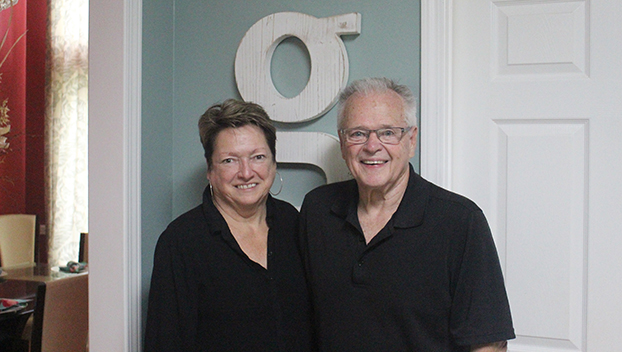 Maria Greer and her husband DC Greer celebrate their 25th anniversary Monday. They have lived in Brookhaven for 20 years. DC was out working in the yard close to where The Dart landed on Friday. (Hunter Cloud | The Daily Leader)

BROOKHAVEN — DC Greer was rooting up weeds in his freshly cut grass outside of his home on Sandalwood Trail close to where The Dart landed Friday afternoon. He and his wife Maria Greer moved to Brookhaven from Ridgeland about 20 years ago.

They first met at church as DC led the singing. Maria said Monday will be their 25th anniversary. They have three boys, one lives in Pike County, one lives in North Carolina and the other lives in Georgia, five grandsons and one granddaughter.

She is a retired investigator and polygrapher who served on the Mississippi State Board of Investigators and Polygraphers.

“I saw how they use polygraphs in investigations with court cases. It helped to eliminate things before you took someone to court,” she said. “I saw when an investigator was called in we would get things resolved. I loved investigations and saving the taxpayers money. I served on the state board for several terms.”

He still works in financing for a company based in Dallas and is able to work remotely.

“I could work on the beach under an umbrella. As long as I have cell service I can work,” he said.

DC is an LSU fan and Maria is a Tennessee fan. They root for each other except the rare occasion the two schools play in football. Additionally, they love watching baseball especially with their nephew being Corey Dickerson, an outfielder for the St. Louis Cardinals. He is a Brookhaven Academy alumni.

DC’s office has several trophies in it. A deer head hangs on the wall and a fox squirrel he killed in the top of an old pine tree is on one side. On the other side of the office are a group of medals hanging on the wall.

An Army veteran, he represents Mississippi in the National Veterans Golden Age Games which is modeled after the olympics. He also runs in the Louisiana and Mississippi senior olympics.

“I sprinted in high school and what revived running for me was about 17 years ago. I was diagnosed with diabetes and I weighed 240 pounds,” he said. “I had a choice to do something about it. I worked out, started training and competed in the 50, 100, 200 and 400 meter races…I like to compete, I hate losing.”

Their free time is spent visiting family, going to old down towns like Pawhuska, Oklahoma, home of The Pioneer Woman and cooking together. Maria said DC is the sous chef as he is a go getter and does the prep work.

He spends a lot of his free time making sure the yard is well maintained. She devotes her retirement time to prayer ministry working with the Veterans Compassion Contact Group.

“We contact veterans who are shut in and need someone to talk with,” she said. “We encourage them and we report back to the VA if we have any concerns. I got involved because of DC. We love our veterans and do what we can to support them.”

They enjoy each other and live to serve the Lord. Maria said she likes to touch the lives of others with prayer or food.

Tanglewood as a neighborhood is a great place to live, she said. The neighbors are some of the best they have had and they love them dearly. DC loves the neighborhood dogs treating them with belly rubs or hot dogs. It is a neighborhood where they can count on each other.

DC said they are blessed and enjoy taking care of their home in Brookhaven. Together they love to support the local restaurants and love Brookhaven.

“It is one of the friendliest southern towns I have ever been to. It is family oriented,” she said. “We love to visit old downtown areas. In all of our travels, we have seen there is nothing that matches what Brookhaven has done.”