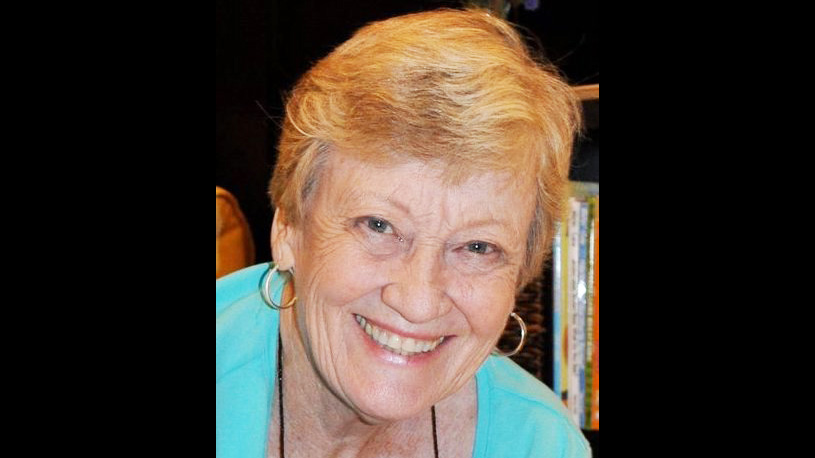 Sally Denman Johnson, a long-time Magnolia, Mississippi resident who was loved by her family and friends, died on August 25, 2022, shortly after being diagnosed with pancreatic cancer.

Sally’s funeral will take place at The Episcopal Church of the Redeemer in Magnolia, Mississippi, on Saturday, September 10th at 2:00 PM. There will be a visitation ahead of the service beginning at 1:00 PM.

Sally was born on September 27th, 1934, in McComb, Mississippi, to Dorothy Stanton Denman and William T Denman Jr. Growing up in Fernwood and then McComb she loved music, dancing, theater, and reading. Even at a young age she spent hours immersed in books and her imagination.   With the exception of teaching swimming at the Fernwood Country Club as a teenager, Sally was significantly lacking in athletic prowess, but what she lacked in athleticism was more than made up for with a bright mind and a quick sense of humor.

Sally and John wed in 1955 at the Episcopal Church of the Mediator in McComb and moved to Kansas City, Missouri, where their daughters were born. However, the cold winters made their return southward a welcome one.

Sally, John, and the girls moved to Alabama where Sally would go on to earn a master’s degree from the University of South Alabama. Throughout their years in Mobile, Sally was an active member of Trinity Episcopal Church and taught at “The Episcopal School” (St. Luke’s) and St. Paul’s School. Many of Sally’s longest and dearest friendships were formed during her time in Mobile, as was her love of gardening, and the ability to throw an impromptu party.

When they moved from Mobile to Mississippi Sally taught from 1984 – 1993 at McComb High School (the school from which she had graduated). She was an excellent English teacher, respected by her peers and infamous among her students for being unable to complete the reading of certain poems without choking up. In retirement she was often asked to participate in literature readings for the Pike County Arts Council.

Sally was a devoted Episcopalian her entire life. She loved the liturgy, hymns, and traditions of the church. For the remainder of her life, Sally was a dedicated member of The Episcopal Parish of the Mediator-Redeemer. She was a member of the choir and served on the vestry and altar guild. Sally was an avid and omnivorous reader and a perpetual learner. For decades she and John attended the Sewanee Summer Seminar in Sewanee, Tennessee at the University of the South. It was a highlight of their year.

A former member of the Flower Lovers Club and the Magnolia Beautification Project, Sally delighted in gardening and the natural world. She knew the names of a myriad of plants, common and Latin.

She also loved to travel, especially with her daughters and granddaughters. Sally preferred to abdicate all responsibilities of navigation or driving. On at least one occasion, this included allowing youthful drivers the opportunity to hone their skills on small mountain roads while she immersed herself in a book in the back seat.

Sally had a gift for enjoying life. She was largely unburdened by the smaller details of life (i.e., expiration dates on food, passports, passwords) but delighted in experiences both grand and mundane. She could wax eloquent over handmade Belgian truffles and still savor her stash of Little Debbie Zebra Cakes. She could be moved by a Shakespeare sonnet and tickled with a bawdy limerick.

She was a mentor to many. She could be counted on to recommend a good book, share a recipe, and listen to your troubles, providing apt insights. Sally was a source of wisdom and wit. Many influenced her spiritual and intellectual life including her mother, Al-Anon, C.S. Lewis, Richard Rohr, and Ken Wilber to name a few. These influences led to an interest in mystical and contemplative thought and eventually to her helping form a centering prayer group at the Parish of Mediator-Redeemer.

Despite being a stickler for proper grammar and a timely thank you note, Sally was non-judgmental and accepted all ideas, people, and cheap wine. Her genuine interest in others and warmth drew many to her. Over the last decade, a group formed around Sally and her family. The group would meet weekly for “Friday Night Wine Time.” Friday nights at Sally’s were a safe space for low class wine and high class conversation. She cherished her Friday nights, and all those around her were fortunate to share her infectious laugh and irreverent wit, and to witness her last lesson: how to live well and how to die well.

Preceding her in death were her parents and husband. Surviving to argue over the details of the family stories, throw out random lines of poetry, correct grammar, and putter in a garden are her three daughters, Melissa Johnson, Joanna Mason (Chip), Elizabeth Woodall (Bennie) and her brother, William T. “Rusty” Denman III.

The family wants to express our heartfelt gratitude to Dr. Luke Lampton for his care, friendship, and compassion. Sally thought the world of him and treasured his wisdom, humor, and intelligence. It is not often that you can discuss literature during your checkup. We also want to thank Magnolia Clinic, Beacham Memorial Hospital, and Compassus Hospice Care for their kindness and help to all of us in her final days.

In lieu of flowers, open your mind, heart, and a good book. Any charitable donations can be made to The Episcopal Church of the Redeemer or the charity of your choice.

“…Tell me, what else should I have done?

Doesn’t everything die at last, and too soon?

Tell me, what is it you plan to do

with your one wild and precious life?”