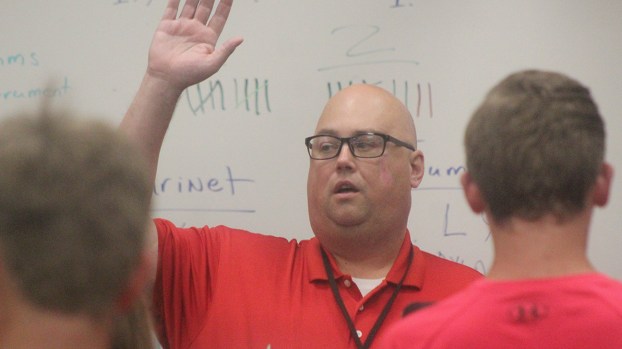 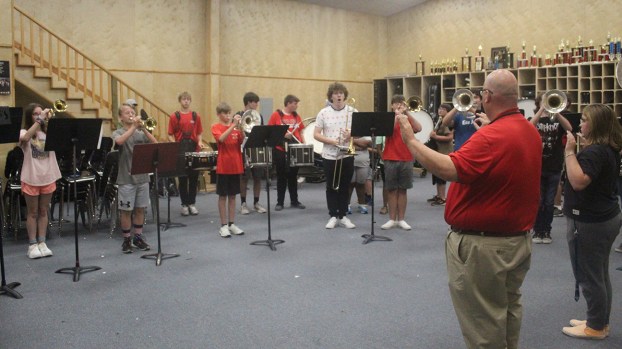 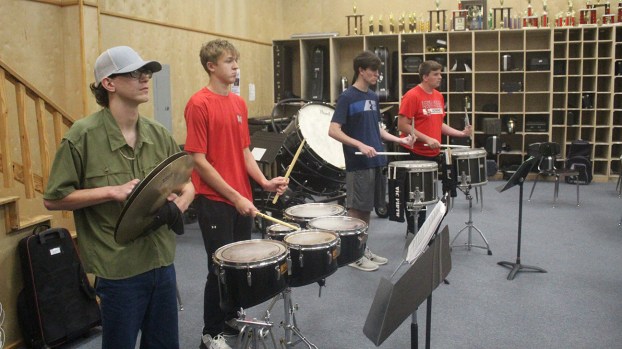 PHOTO BY HUNTER CLOUD One of the rules of the Loyd Star band hall is only percussion players may touch the percussion instruments. They play an important role in the band by keeping the beat.

His six years at Smithville saw a program who had fallen on hard times and only mustered 12 kids to grow to 37 kids and a state championship. Greene County was a similar story where he had to rebuild a program.

At Loyd Star, he saw an opportunity to take a band with a good foundation and make it better. The job gives him another small school and community to be involved in.

“It is more of a family and that is what I love most about small schools,” White said. “I am able to know the students better and teach them more things one on one. I had seen Loyd Star a few years back. Jamie Creel called me and told me about the program and asked if I knew about it. I applied and got an interview and a job. I have just felt at home here.”

Already he is seeing changes in the band’s culture. The kids are enjoying being a part of the band and are excited about what they can do. He said over the summer’s band camp and the start of the year he has seen their hard work.

“We aren’t there yet but we can do great things here,” White said.

In his office is a picture frame with three pictures of band members from Smithville. Former band students gave it to him so he would never forget the kids and the state championship they won in competition.

Bands play at competitions where they are judged on the music, the marching, the way the kids carry themselves. Drumline and color guard are judged separately. At the end the band has a composite score and judges leave their comments on what they need to fix.

It takes a lot of dedication from the kids to achieve a goal of winning a state championship in marching. It is his goal to take Loyd Star to different band competitions and for them to perform well.

“At Smithville, I saw it play out over three years. The kids wanted to do it. They felt no one appreciated them,” he said. “The better we did the more support we got. We would leave for competitions and we would have a caravan following our bus. It takes time to change the culture but once it sets in the results happen.”

Normally, White likes to choose three shows he feels will be a good challenge for his band but ones they can perform. He lets them vote on which one they will perform as a way to give them a voice.

This year was a little different because he is getting a feel for their level of ability. White picked music he knew they could play and music he knew would be exciting and fun.

Over the course of the football season he will add different things so the crowd sees something different every week. Loyd Star’s Marching Hornets will perform “Not of this World’’ with songs like “Locked out of Heaven,” and “Fly me to the Moon.”

Another way the students have gotten involved is designing a new band t-shirt. On the board in the band hall are different questions about how they want the shirt to look.

Football season kickoff for the band this week when they travel to Mize. Monday as the rain started to pour down across Lincoln County, White was messaging the Mize band director about the upcoming game and weather.

“It is nerve wracking right now because of the weather. I want them to do well,” he said.

Woodwind instruments such as flutes and clarinets can not be played in the rain while brass and percussion instruments are fine. He added he does not want to get any of the kids sick by making them play in the rain.

Cold and hot weather are something the kids might complain about but have no effect on the instruments, he said. Loyd Star’s band is in mid-season form right now.

“They have grown leaps and bounds. I wasn’t sure what I was stepping into,” White said. I had expectations and they have grown to exceed them. They are where I thought we would be by mid-season. We add something new so they don’t go through the motions. I want to see them achieve something together and I want to watch them grow. It has been very impressive.”

His goal for the band ultimately is to be what band directors call a superior band. Another hope of his is to incorporate a jazz and concert band to allow the kids to be a better musician. Indoor marching is another competition he is considering and Loyd Star basketball games could feature a pep band this year.

The band is 40 strong but could grow to 70 one day. White said Union has about 100 kids and is a 2A school. It could grow each year.

White said he could not do it without the help of some of the band students. Cole Rutledge, Brianna , Emma Britt, Mathew Brister and Blake Russ have stepped up as leaders.

“They are an extra set of eyes because I don’t have the assistance a football or a basketball coach has,” White said. “We have a stretch block and they lead that. They do sectional work and teach the kids additional skills. They do the marching and fundamentals and it gives me the chance to decide what needs to be changed or improved.”